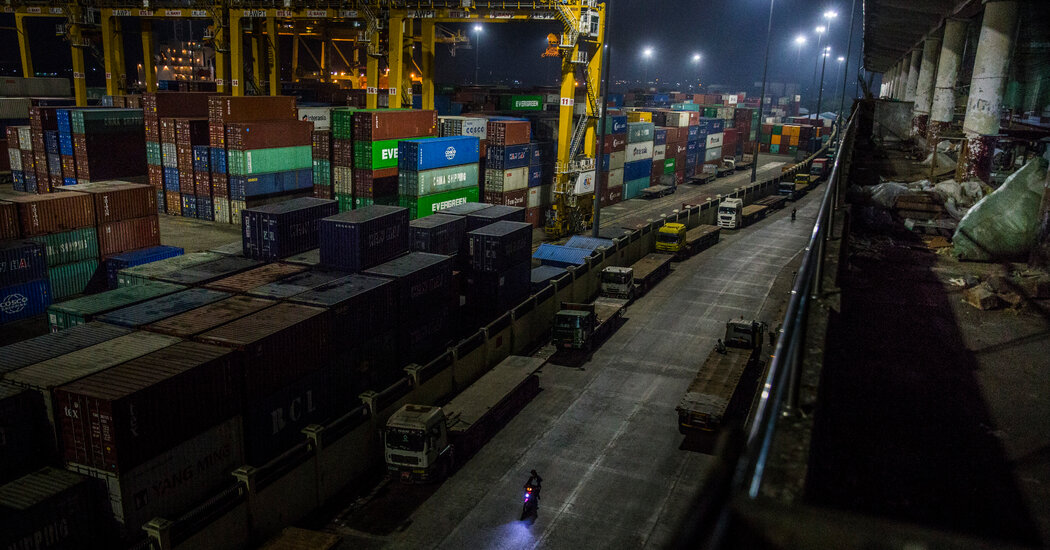 Bank tellers’ windows are gathering dust. Cargo at the port sits uncollected. And in grand government ministries in Naypyidaw, the capital of Myanmar, stacks of documents are curling in the humidity. There are few people to process all the paperwork.

Since the military seized power in a coup last month, an entire nation has come to a standstill. From hospitals, railways and dockyards to schools, shops and trading houses, much of society has stopped showing up for work in an attempt to stymie the military regime and force it to return authority to a civilian government.

While demonstrators continue to brave bullets — at least 220 people have been killed since the Feb. 1 coup, according to a local group that monitors political imprisonments and deaths — the quiet persistence of this mass civil disobedience movement has grown into a potent weapon against the military. For all the planning that went into the putsch, the generals seem to have been utterly unprepared for the breadth and depth of resistance against them.

“They robbed the power of the people from our elected government,” said Daw Cho Cho Naing, a clerk at the Ministry of Foreign Affairs who has refused to work along with most of her colleagues. “Our country’s democracy journey has just started, and we can’t lose it again.”

The effect of millions of people refusing to do their jobs has been dramatic, even if the military is built to withstand pressure. Up to 90 percent of national government activity has ceased, according to officials from four ministries. Factories are idled. In February, the national business registry recorded fewer than 190 new registrations, compared with nearly 1,300 the year before.

In a country where at least a third of the population was already living below the poverty line, civil disobedience is bringing tremendous self-imposed hardship to the people. But the striking class hopes that just a few more weeks or months of financial coercion will starve the military of the work force and resources it needs to run the country.

On Sunday, dozens were killed in factory districts in Yangon, the largest city in Myanmar, when security forces cracked down on striking protesters with lethal force. The area is now under martial law, but many workers have vowed not to give up.

“We might be poor in terms of money, but we are rich with the value of loving our country,” said Ma Thuzar Lwin, whose husband, Ko Chan Thar, a construction worker, was shot in the neck during a recent attack.

Early this week, as her husband struggled for his life, Ms. Thuzar Lwin voiced her aspirations for him. “I want him to see with his own eyes the day the junta steps down,” she said.

The Myanmar military, which has ruled the country for most of the past 60 years, is adept at killing. It is less practiced in running an economy that began integrating into the global financial system during a decade of reform.

In raids following the coup, soldiers rounded up hundreds of officials considered faithful to the civilian government led by the National League for Democracy party. An Australian economic adviser to Daw Aung San Suu Kyi, the nation’s de facto civilian leader, was also locked up. More than 200 employees of the central bank, including five deputy directors, have been fired for their civil disobedience.

As a result, taxes aren’t being collected in Myanmar. The bulk of licenses for imports, exports and much else are no longer being granted. With employees of private banks joining the strike, most money flows in and out of the country have stopped. Many companies have been unable to pay employees. Military banks have limited withdrawals for fear of runs on cash.

Last week, the military ordered private banks to transfer funds deposited by agricultural traders to state or military banks so the money could be withdrawn for the upcoming harvest. The order has gone unheeded.

“They are the king now, but we are not their servants,” said Daw Phyu Phyu Cho, a loan officer for a private bank who has joined the strike. “If we all unite, they can’t do anything.”

Myanmar is now short of many things at once: gasoline for cars, imported grains and legumes, foreign toothpaste. In the Yangon area, retail prices for palm oil have increased 20 percent since the coup, according to the World Food Program.

People have gotten used to long lines, for A.T.M. withdrawals, for pension collection, for handouts of rice and curry. Striking factory workers are having to choose between clamping on hard hats and goggles to join a protest or waiting in the hot sun for whatever basic necessity might be on offer that day.

For now, informal financing networks are helping to ease some of the pain of lost wages. In Mandalay, the second-largest city in Myanmar, a single Facebook group run by ordinary citizens has raised funds to support nearly 5,000 people who are participating in the civil disobedience movement, which is known by the abbreviation C.D.M.

“Myanmar people are so generous in their donations to people in need,” said U Aung Htay Myint, one of the organizers of the Mandalay effort.

Myanmar’s economy, one of the least developed in Asia after decades of military mismanagement, was already reeling from the coronavirus, which hit the garment and tourism industries particularly hard. With the coup, foreign investors are feeling skittish. Toyota has delayed plans for a factory opening. The World Bank has paused disbursements in the country.

Sanctions by Western governments on military officers and companies have piled up. Last week, the U.S. Treasury Department banned American dealings with, among other businesses, a gym and a restaurant owned by the children of Senior Gen. Min Aung Hlaing, the military chief who led the coup. The United States government has frozen about $1 billion in assets held by Myanmar in an American financial institution.

But the military still has plenty of income streams, most notably the country’s oil and gas fields. U Ye Kyaw Thu worked as an offshore platform technician for the Shwe gas project for a decade. Most of his colleagues are foreigners, and he knows that other Myanmar workers will be brought in to replace him. Still, Mr. Ye Kyaw Thu said participating in the strike was the right choice for him

A group of legislators that says it represents the ousted Parliament has written to foreign oil and gas companies requesting that they cease payments to the regime lest it “sustain the current military junta’s violent rule and enrich its leaders.”

But extraction of Shwe natural gas, which is sent to China, hasn’t decreased since the coup. Such oil and gas earnings add up to $90 million a month to the regime’s coffers, according to estimates from the disbanded Parliament.

Beyond oil and gas, the military and its vast business holdings profit from the illegal collection of natural resources, such as jade and timber, which brings in income rivaling the country’s official revenues.

“So many of their funds come from black markets,” said Dr. Sasa, a special envoy to the United Nations for the ousted civilian authority.

The civil disobedience movement won’t halt such illicit activity. In some cases, as with the production of methamphetamine and other drugs, production may boom in the shadowy spaces of political conflict.

In the meantime, Myanmar’s citizens are paying the greatest price. A township administrator in Shan State, who asked not to have his name published because of the danger of speaking out, described how he was hauled in for interrogation after participating in the civil servant strike. After escaping through the jungle, he is now in hiding.

In Yangon, Ko Soe Naing, a garment factory worker, said he recently watched as a fellow striking worker was shot in the head and killed. Mr. Soe Naing earned about $115 per month for his job, barely a living wage.

“We have nothing to lose,” he said. “As a basic laborer, we only have one choice. It’s to fight back against the junta.”

Last week, before dawn, soldiers descended on a housing complex for railway staff in Yangon. According to eyewitnesses, the soldiers demanded that strikers who had shut down the country’s rail system leave their homes immediately. All 700 or so residents left, grabbing armfuls of possessions at gunpoint.

U Ko Ko Zaw, one of the residents, scrambled out of his house with all that he owned: a suitcase of personal effects, a jug of cooking oil and a live chicken. Later that day, he sold the bird for money.

“It’s OK to die of hunger under military rule, it’s OK if they fire me,” Mr. Ko Ko Zaw said. “I will keep joining the C.D.M. because I believe it can bring down their economy.”

GREENVILLE, N.C.--(BUSINESS WIRE)--Employers aiming to win the war on talent have a new “A” team to tap into: college and professional athletes. … END_OF_DOCUMENT_TOKEN_TO_BE_REPLACED

Mortgage rates are likely to rise in July, extending a seven-month streak. High inflation, and the Federal Reserve's efforts to control it, have … END_OF_DOCUMENT_TOKEN_TO_BE_REPLACED