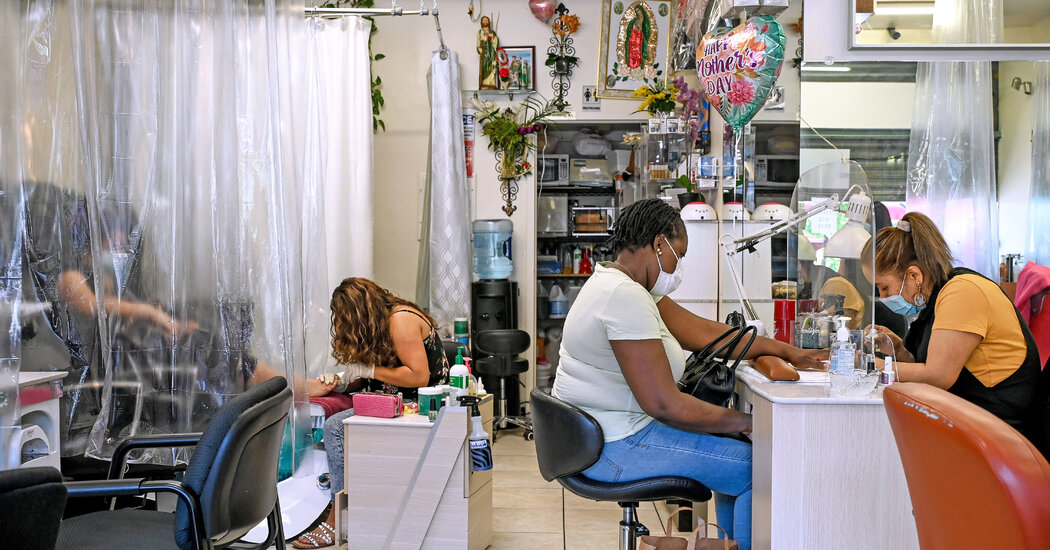 Most of those regulations came to an end on Wednesday, when the state removed most capacity restrictions from businesses statewide and adopted federal guidelines that allow people who have been vaccinated to largely eschew masks, indoors and out, in most situations.

The reaction from many city dwellers was cautious, after more than a year in which the city’s known virus death toll climbed to more than 33,000 people. Workers at many businesses around the five boroughs expressed similar reluctance to leap back into normal behavior.

Chris Polanco, 32, a clerk at Melrose Hardware in the Bronx, said he will keep his mask and the plastic curtain in front of the cash register, and would continue asking people to mask up in his store, offering masks to people who do not have them.

areas in the country.

Irene DeBenedittis owns Leo’s Latticini, an Italian deli there. She said that even though she and her staff had been vaccinated she planned to keep requiring masks, as a courtesy and a precaution.

“I am a bit confused about the rules, and also concerned about the customer,” Ms. DeBenedittis said. “For now, we are keeping the mask on so we feel safe and our customers feel safe too.”

Robert W. Newell Jr., the president of a union that represents 17,000 workers, mainly in supermarkets and food production, said, “I’ve asked everyone to keep their masks on, at least for another couple of weeks.”

Vaccine passports” like New York State’s Excelsior Pass are not widely in use, and many consider a vaccine honor code flimsy. Even if proof of vaccination is bolstered somehow, it may be harder for individual business owners to enforce mask rules when they are no longer universal.

The venue plans to continue to require all audience members to wear masks for the foreseeable future.

Ms. Robertson noted that the state continues to strongly recommend masking when a mix of vaccinated and unvaccinated people are together indoors, which to her is just a shade below a requirement.

“If the government says to you it is strongly recommended, for us it’s like a mandate,” Ms. Robertson said.

Not all businesses were so hesitant — some have spurned the rules for much of the pandemic.

One of them is Mac’s Public House, a Staten Island tavern that became a symbol of much of the borough’s defiance to virus regulations when it refused to follow the governor’s curfew and indoor dining bans last year.

was arrested twice, and the bar was finally closed down.

On Wednesday Mr. Presti seethed as nearby restaurants and bars reopened while Mac’s remained padlocked.

“It’s frustrating,” Mr. Presti said. “It’s not like I was this lifelong criminal, it was all for businesses, bringing attention to the situation.”

The Seattle Seahawks are very much still in the running for Baker Mayfield. (Photo by Stacy ... [+] Revere/Getty Images) Getty Images The Seattle … END_OF_DOCUMENT_TOKEN_TO_BE_REPLACED

(CNN) — Kim Kyung-seop recalls going to cheap bars after class with his friends, where they binged on as much makgeolli as possible. "You know the … END_OF_DOCUMENT_TOKEN_TO_BE_REPLACED