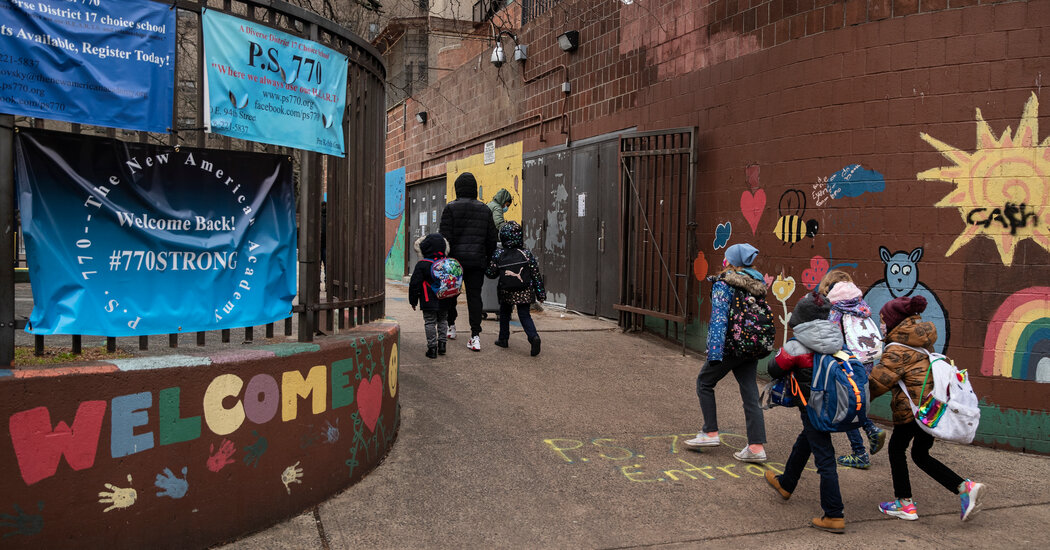 New York City’s public school system, the nation’s largest, will give families another chance to enroll their children in in-person classes following new guidance released by the Centers for Disease Control and Prevention, Mayor Bill de Blasio said on Friday.

The new C.D.C. guidance allows elementary school students wearing masks to be spaced three feet apart, rather than six feet, in reopened schools. The city’s elementary schools, prekindergarten programs and programs for children with complex disabilities will adopt the new distancing guidelines in April, Mr. de Blasio said, allowing classrooms that have been operating at one-third capacity for many months to accommodate more students. With less distancing required between students, schools will be able to fit more children into each city classroom.

The city will continue to assess the risks of adjusting distancing rules for middle and high school students, Mr. de Blasio said. The C.D.C. said that its relaxed three-foot guideline only applies to to students in middle schools and high schools where community transmission is not high. (New York State has more recent cases per capita than any state except New Jersey, and the New York City metro area has the country’s second-highest rate of new cases behind only Idaho Falls, Idaho.)

The guidance still holds that adults in schools should keep six feet of distance from each other, and from students. New York City teachers have been eligible for the coronavirus vaccine since January.

many nonwhite families in particular are still wary of in-person learning, and it is likely that a significant number of parents will keep their children at home through the end of the school year in June.

New York’s schools, some of the first in the nation to reopen, have had extremely low positive test rates. Mr. de Blasio has committed to fully reopening the city’s school system this September for full-time instruction for any child who wants it. He has also said he expects the city to maintain a full-time remote option for some children this fall.

The poshest place in California's Coachella Valley is The Madison Club. This exclusive gated community in La Quinta is where A-listers and tycoons … END_OF_DOCUMENT_TOKEN_TO_BE_REPLACED

KOROPY, Ukraine — Four men tugged at long strips of fabric to lift a coffin out of the gaping hole in the backyard of a small house. They flung the … END_OF_DOCUMENT_TOKEN_TO_BE_REPLACED