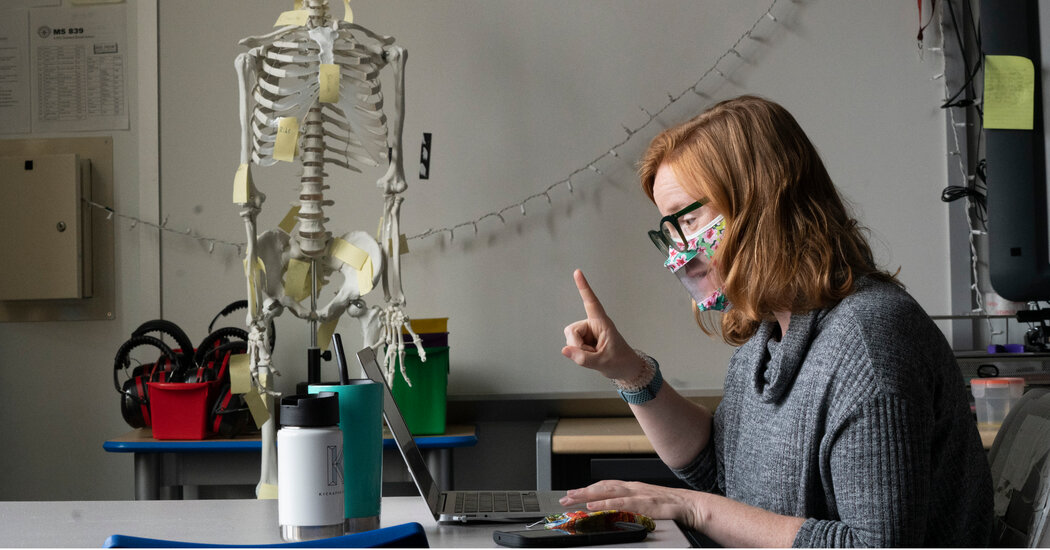 This school year, most of the city’s roughly one million students — about 600,000 — stayed at home for classes. When the new school year starts on Sept. 13, all students and staff will be back in school buildings full-time, Mr. de Blasio said.

New York is one of the first big cities to remove the option of remote learning altogether for the coming school year. But widespread predictions that online classes would be a fixture for school districts may have been premature. Gov. Philip D. Murphy of New Jersey announced last week that the state would no longer have remote classes come fall, after similar announcements by leaders in Connecticut and Massachusetts.

New York City’s decision will make it much easier to restore the school system to a prepandemic state, since students and teachers will no longer be split between homes and school buildings.

been most likely to keep their children learning from home over the past year.

New York, like districts across the country, has struggled to make remote learning successful. Online classes have been frustrating for many students, and even disastrous for some, including children with disabilities.

By one estimate, three million students across the United States, roughly the school-age population of Florida, stopped going to classes, virtual or in person, after the pandemic began. A disproportionate number of those disengaged students are low-income Black, Latino and Native American children who have struggled to keep up in classrooms that are partly or fully remote.

Mr. de Blasio, who has been criticized for not doing more to improve the quality of online education, has said that remote learning is inherently inferior.

extraordinarily complex for the city to run two parallel school systems, one in person and one online, with many students switching between the two every few days. So many students and teachers operating from home made it nearly impossible for some schools to offer normal schedules.

For the past few months, Mr. de Blasio said he expected the city to keep some kind of remote learning option for the fall. But he and his aides changed their minds in recent weeks, officials said, as virus rates plummeted throughout the city and as children 12 and older became eligible for the Pfizer vaccine.

The mayor is expected to announce more details about the city’s school reopening plan at a news conference later on Monday.

AUSTIN, Texas--(BUSINESS WIRE)--As the first multifamily management company to be recognized in the Public Relations and Marketing Excellence Awards, … END_OF_DOCUMENT_TOKEN_TO_BE_REPLACED

There have been whispers of cooling housing and rental prices in the San Francisco Bay Area, but that hasn't yet translated into practical, noticeable … END_OF_DOCUMENT_TOKEN_TO_BE_REPLACED

Cars pass in Independence Square at twilight in Kyiv, Ukraine, Monday, Oct. 31, 2022. Rolling ... [+] blackouts are increasing across Ukraine as the … END_OF_DOCUMENT_TOKEN_TO_BE_REPLACED