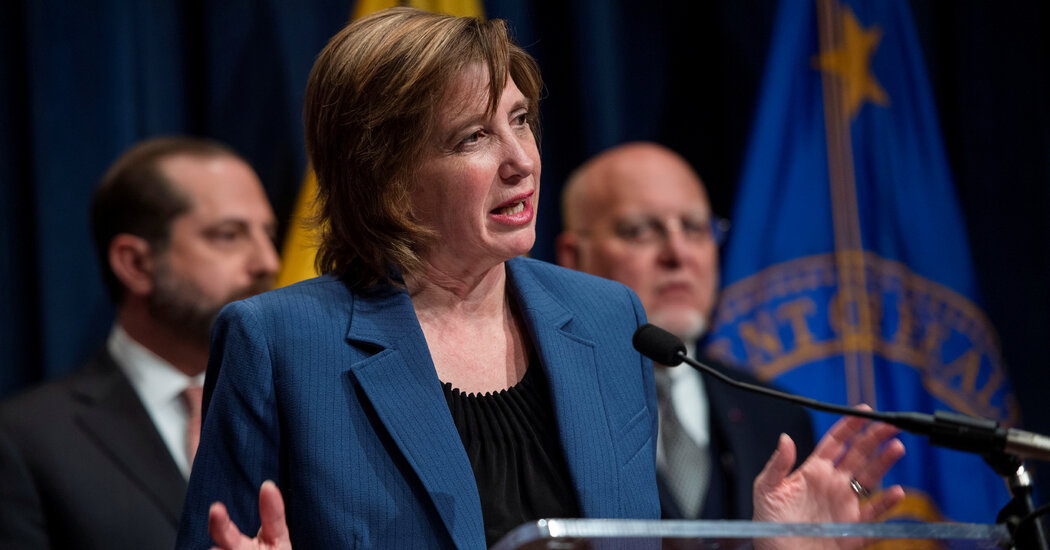 Dr. Nancy Messonnier, who famously warned the nation early last year that the coronavirus would upend their lives, resigned from her position at the Centers for Disease Control and Protection on Friday.

Dr. Messonnier’s resignation is effective May 14. She is taking on a new role as an executive director at the Skoll Foundation, a philanthropical organization based in Palo Alto, Calif., she told staff in an email on Friday.

Her exit may augur more changes at the agency. Reports have circulated for weeks that the C.D.C.’s new director, Dr. Rochelle Walensky, planned to completely reorganize the division Dr. Messonnier led.

“My family and I have determined that now is the best time for me to transition to a new phase of my career,” Dr. Messonnier wrote in the email to staff.

Dr. Messonnier began her career in public health in 1995 with a stint in the prestigious Epidemic Intelligence Service. She has since held a number of leadership posts in the C.D.C. Since 2016, she has served as director of the National Center for Immunization and Respiratory Diseases, the C.D.C. division responsible for managing influenza and other respiratory threats.

In late 2019, she became the agency’s lead in responding to the coronavirus, and initially shared a stage with President Trump at briefings about the coronavirus.

She fell out of favor with President Trump and sent stocks tumbling after she sounded a dire alarm about the coronavirus, saying it would disrupt the lives of every American.

“It’s not a question of if this will happen but when this will happen and how many people in this country will have severe illnesses,” she said on Feb. 25, just as Mr. Trump was boarding Air Force One in New Delhi for his flight home.

Soon after that, she stopped appearing at briefings of the White House and of the C.D.C.

The Bay Area is the last place in the U.S. with rental prices below pre-pandemic levels, according to a new report from Apartment List. That seems … END_OF_DOCUMENT_TOKEN_TO_BE_REPLACED

BUCHA, Ukraine — A breeze rustles through the cherry blossoms in bloom on almost every block in this small city, the white petals fluttering onto … END_OF_DOCUMENT_TOKEN_TO_BE_REPLACED