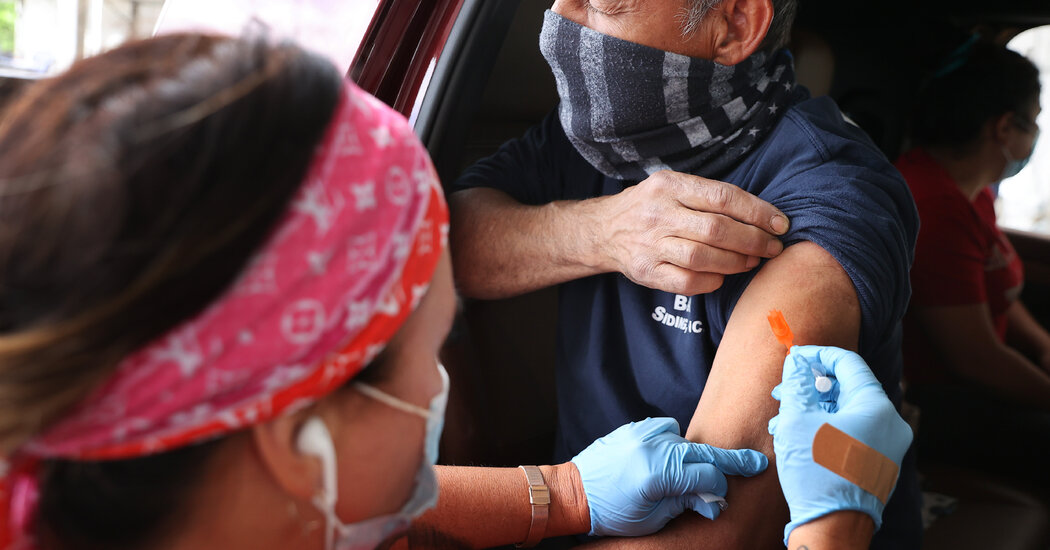 Several new studies released on Wednesday offered encouraging news about the ability of widely used vaccines to protect against severe Covid-19 cases, including illness caused by some dangerous variants.

Two published studies found that the Pfizer-BioNTech vaccine was extraordinarily effective against severe disease caused by two variants, including the dominant one in the United States. And the results of an early-stage trial of the Moderna vaccine — though not published or vetted by scientists — suggested that a single dose given as a booster was effective against variants first identified in South Africa and Brazil, the company said.

The emergence of new variants, and whether vaccines are effective against them, is a subject of continued concern as a variant first detected in India, called B.1.617, spreads across the country. There is also a risk that further variants will arise there as the country’s outbreak grows, experts say. Another worrisome variant, P.1, is wreaking havoc across South America.

In the Pfizer studies, which were based on real-world use of the vaccine in Qatar and Israel, the two variants of focus were B.1.1.7, first identified in Britain and now detected in over 100 countries, and B.1.351, first identified in South Africa. The studies showed that the vaccine can prevent some of the most severe outcomes from Covid-19, such as pneumonia and death, caused by those variants.

Another study, conducted by researchers at Pfizer and at Israel’s Health Ministry, found that the vaccine was more than 95 percent effective at protecting against a coronavirus infection, hospitalization and death among fully vaccinated people 16 and older.

In the United States, experts now believe that attaining herd immunity is unlikely because of the spread of variants and hesitancy among some people in the country to be vaccinated. The variant that has caused the most alarm is B.1.1.7, which is about 60 percent more transmissible than original versions of the virus.

Moderna’s announcement was greeted cautiously, because the results of an early-stage trial have not been published or peer-reviewed. But the company said it was encouraged by results that suggested that a single booster shot of its vaccine would rapidly increase antibodies in vaccinated people, and that those antibodies were effective against the original form of the virus as well as the variants first identified in South Africa and Brazil.

A second booster specifically designed to counter the variant identified in South Africa produced an even stronger immune response, the company said.

MUSCATINE, Iowa--(BUSINESS WIRE)--HNI Corporation (NYSE: HNI) announced today its Board of Directors declared a quarterly dividend of 32 cents per … END_OF_DOCUMENT_TOKEN_TO_BE_REPLACED

Tokyo (CNN) — The Japan Tourism Agency announced on Tuesday, May 17 that it would start allowing small group tours in May as part of a "test tourism" … END_OF_DOCUMENT_TOKEN_TO_BE_REPLACED

If you’re superstitious, today is your day.That's because it's Friday the 13th (the only one of the year, in fact). It's a day when bad juju reigns … END_OF_DOCUMENT_TOKEN_TO_BE_REPLACED