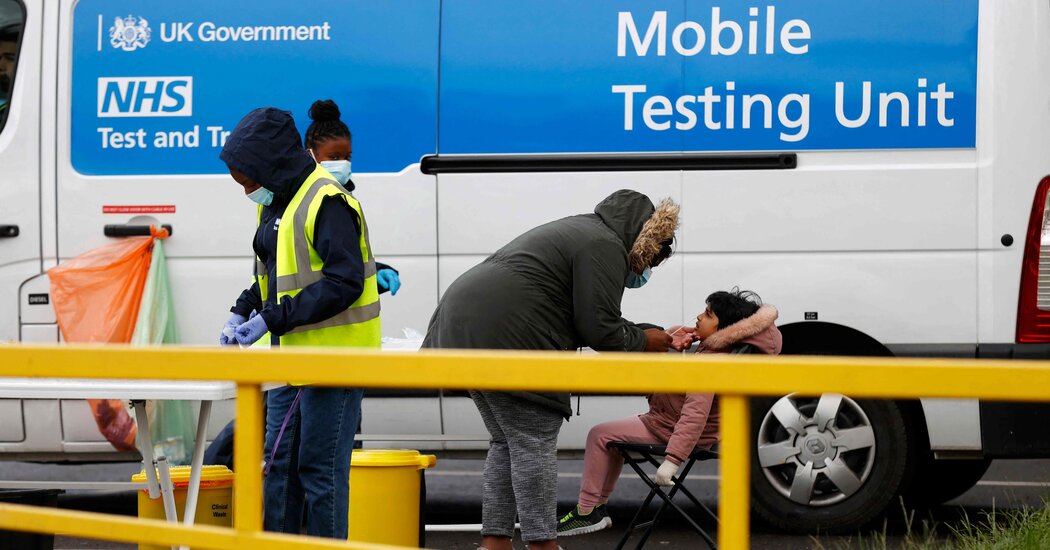 LONDON — A new and potentially more contagious variant of the coronavirus has begun to outpace other versions of the virus in Britain, putting pressure on the government to shorten people’s wait for second doses of vaccines and illustrating the risks of a faltering global immunization drive.

The new variant, which has become dominant in India since first being detected there in December, may be responsible in part for a grievous wave of infections across Southeast Asia, including Nepal, where people have been dying in hospital corridors and courtyards. But efforts to understand the variant picked up once it began spreading in Britain, one of at least 49 countries where it is present. Scientists there are sequencing half of all coronavirus cases amid a push to complete the reopening of its economy.

The preliminary results out of Britain, drawn from only a few thousand cases of the variant, contained both good and bad news, scientists said.

The variant, known by evolutionary biologists as B.1.617.2, is “highly likely” to be more transmissible than the variant behind Britain’s devastating wintertime surge, government scientists have said. That earlier variant, known as B.1.1.7, was itself considerably more contagious than the one that first emerged last year in Wuhan, China.

Public Health England report published this weekend provided signs that government scientists said were consistent with a more transmissible virus: The variant first seen in India was roughly 50 percent more likely than B.1.1.7 to be transmitted to the close contacts of an infected person. Government scientists said last week that it could be anywhere from a few percentage points to 50 percent more contagious than B.1.1.7.

Helpfully for Britain and other wealthy nations, the latest worrisome variant has emerged at a less dire moment of the pandemic. More than four out of every five people in England above the age of 65 — among the groups most vulnerable to the virus — have been given both doses of a coronavirus vaccine, driving down hospitalizations and deaths.

And a new study by Public Health England offered reassuring signs that fully vaccinated people were about as well protected from the variant first detected in India as they were from other forms of the coronavirus.

Other studies in England have shown little to no difference between the effectiveness of the Pfizer and AstraZeneca vaccines.

In Britain, part of its rapid growth may have to do with the particular places it was first introduced. Bolton, in northwest England, where the new variant is most advanced, is a highly deprived area with tightly packed housing that could be hastening its spread, scientists said.

“We do not know if the increase in transmissibility is the result of specific mixing patterns, or super-spreading events,” a group of researchers led by Robert Challen of the University of Exeter reported on May 11, in a study that was among those presented to an influential government advisory group.

That government advisory body said several days later that it had “high confidence” that the variant first seen in India was indeed more contagious, warning that a “substantial resurgence of hospitalizations” was possible. It said that the variant was gaining a foothold in diverse parts of Britain where “contact patterns or behaviors” alone could not explain its spread.

It is not clear if the variant from India is any deadlier than B.1.1.7.

With cases of B.1.1.7 falling, the variant first seen in India now accounts for roughly half of the sequenced coronavirus cases being monitored by Public Health England. The agency’s scientists have said it was likely to replace B.1.1.7 as England’s dominant virus within a month, a startling turnabout so soon after B.1.1.7 swept much of the world.

“For countries that are starting to struggle with B.1.1.7, they now know they have an even faster one close by,” said Devi Sridhar, a professor of global public health at the University of Edinburgh in Scotland.

experimenting with ways to encourage sick people to isolate.

Some scientists have urged the government to go further by dramatically closing the gap between doses of the Pfizer or Moderna vaccine, for instance, and rerouting those shots to cities hardest hit by the variant from India. Because the AstraZeneca vaccine appears most protective with a 12-week dosing interval, those scientists said, using it meant leaving people only partially vaccinated for a period of time.

At the very least, Professor Sridhar said, people needed to be reminded to remain cautious until they were fully vaccinated.

Prime Minister Boris Johnson’s plan to scrap almost all remaining lockdown restrictions on June 21 rests in large part, scientists said, on how many second doses Britain can administer in the coming weeks.

For many poorer nations, starved for vaccines, there is little choice but to leave long delays between first and second doses. Some of them are uncertain about when shipments of second doses will arrive. Large portions of those countries remain entirely unprotected.

If the variant from India spreads as quickly in other countries as it has in Britain, the burden on unvaccinated nations may grow.

When you think of Oscar winner Sandra Bullock, the first words that come to mind are probably not "organic farmer."But that's one of the many things … END_OF_DOCUMENT_TOKEN_TO_BE_REPLACED