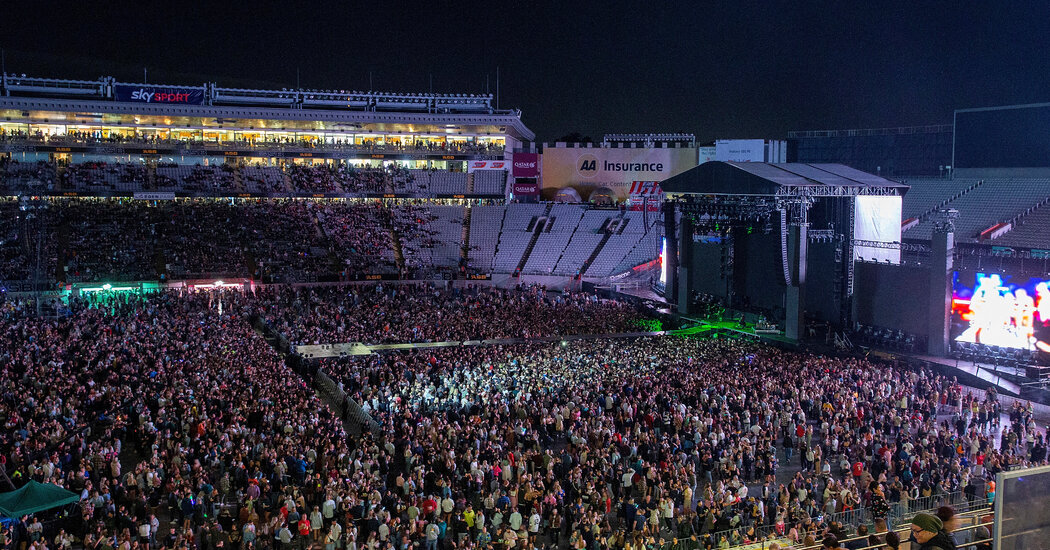 AUCKLAND, New Zealand — More than 50,000 fans packed into Eden Park stadium, New Zealand’s largest, on Saturday night for what is believed to be the largest live in-person concert since the pandemic began.

Through a combination of swift lockdowns and border closures, New Zealand has all but eliminated the coronavirus, with 2,600 cases and 26 deaths reported since the start of the pandemic, according to a New York Times database.

Masks are rarely worn, and there are no social-distancing requirements in place. Instead, people are encouraged to scan in on the country’s tracking and tracing system, and hand sanitizer is widely available.

“Next time they tell you it’s impossible, show them this,” Six60, the New Zealand band headlining the concert, wrote in a comment on an aerial photograph of the crowd, posted to its Instagram account.

held an experimental indoor concert for 5,000 fans, test out safe ways to resurrect live music in a post-Covid environment, venues in New Zealand have been operating much as they did before the pandemic.

Less than 3 percent of New Zealand’s population has received a dose of a vaccine, according to a New York Times database, and audience members are not required to present proof of inoculation or a negative virus test.

Large live music events are also being organized in other places that have been able to curb the spread of the virus. In Taiwan, the singer-songwriter Eric Chou played sold-out events last year at Taipei Arena, with tickets capped at 10,000 people. In China, over 4,000 live concerts were held during the first week of October for the country’s National Day celebrations.

Perhaps the greatest change for New Zealand is the lack of international performers. With the border closed to almost everyone but citizens and some essential workers, performing artists have had to apply for special permission to enter the country, then spend two weeks quarantining in hotels. The Australian children’s entertainment group The Wiggles and a tribute act to the band Queen have been among those granted special entry visas for entry.

singer Benee, who gained fame from TikTok and hails from Auckland, headlined the annual music festival Rhythm and Vines near the city of Gisborne, which attracted 23,000 attendees.

A new trans-Tasman travel corridor, which permits quarantine-free travel between Australia and New Zealand, began last week, opening the way for the Australian singer-songwriter Courtney Barnett to announce a 10-date tour in July.

Three men were indicted in the death of the notorious gangster James (Whitey) Bulger, who was beaten to death four years ago in a West Virginia … END_OF_DOCUMENT_TOKEN_TO_BE_REPLACED

Dr. Connolly and Dr. Mott live in the North Baltimore neighborhood of Homeland, known for its strong public schools and colonial architecture, which … END_OF_DOCUMENT_TOKEN_TO_BE_REPLACED