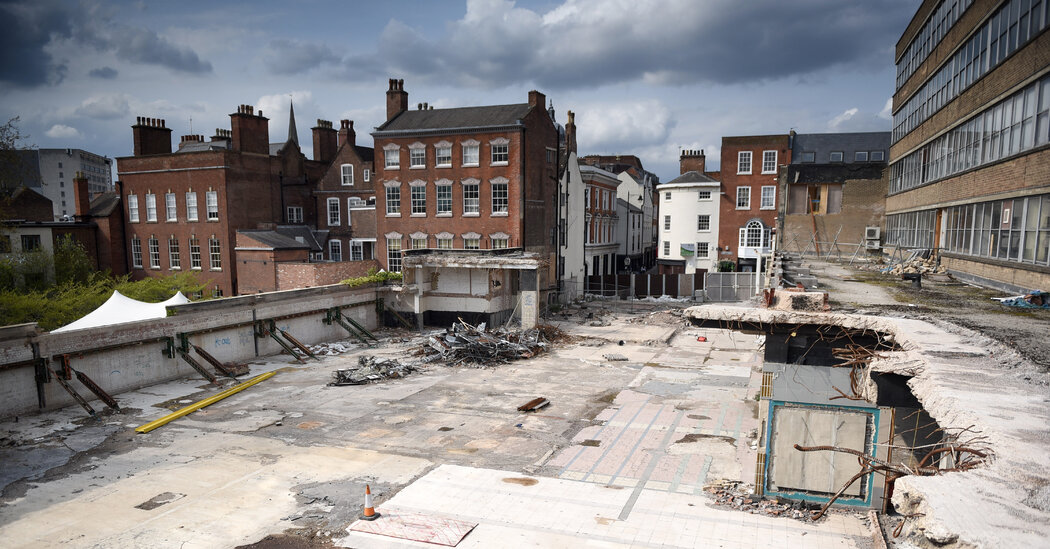 NOTTINGHAM, England — Hilary Silvester still recalls the moment she first saw the Broadmarsh Center, a bleak 1970s shopping mall that symbolized Nottingham’s modernization in a scorned architectural era but is now being consigned to history.

“To be honest, I started to cry,” said Ms. Silvester, executive chairwoman of the Nottingham Civic Society, describing how the center created a giant wall across the city, obliterating the familiar skyline behind. “I couldn’t see one building that I recognized.”

Main streets and malls across Europe are in retreat, with retail stores closing right and left, and when it is bulldozed completely, this aging, unloved edifice will become a symbol of that decline. While retailers were already fighting a losing battle against online competition, the coronavirus pandemic has accelerated the trend, scuppering any chance of replacing the Broadmarsh with another mall.

So in a preview, perhaps, of what many cities throughout the world may soon face, Nottingham is mulling what to do with this soon-to-be gaping hole at its core. And at the heart of that debate lies an intriguing question: Should the city of the future look more like the past?

hilltop castle, elegant Georgian streets and a hidden maze of around 500 sandstone caves, some dating to the Middle Ages.

Bath, look at York, you look at the visitor traffic they are getting,” said Ms. Blair-Manning, referring to English cities that have long been tourist magnets. She added that Mr. Rogan’s ideas “would make complete and utter sense if you were building something that actually was focused on heritage tourism.”

Others are not so sure. David Mellen, the leader of Nottingham City Council, favors a blend of living space and green areas, with cafes and some shops. The lease on the Broadmarsh was handed back to the council when plans for a new mall collapsed, but the site will still have to generate income.

Mr. Mellen favors drawing more tourists to the city’s unusual network of caves, which include Britain’s only medieval underground tannery and were often carved into the sandstone as cellars and used over the centuries for everything from store rooms and dwellings to factories and air raid shelters. But he isn’t convinced about readopting the old street pattern.

“Cobbles were there for a purpose at that particular time,” he said. “You can’t go back to the past unless you are in some kind of theme park, and we are not a theme park, we are a core city of the U.K.”

Greg Nugent, who leads an advisory committee on the redevelopment, likes the idea of creating a symbolic link to Sherwood Forest but is also cautious about readopting the old street plan.

“I like it but I’d want it to be based on more than ‘Let’s bring those streets back,’” he said. “I think there’s a bigger idea in there.”

With so much empty space concentrated in the center of Nottingham, he sees an unrivaled opportunity for the city to steal a march on rivals coping with the decline of central malls and main streets. One option might be to devote part of it to businesses working on the green technologies of the future, said Mr. Nugent, who was the director of the organizing committee of the London 2012 Olympic Games.

“I think there is a beginning of a renaissance for Nottingham,” he said. “It’s a really interesting city, very creative — it has a bit of an attitude. It’s not London, it’s not Manchester, it’s got a certain bravery about it.”

Perhaps that was not best reflected in the Broadmarsh, which — never mind the architecture — always had to play second fiddle to the Victoria Center, a more upmarket competitor nearby.

Inside the demolition zone, the Broadmarsh feels like a time capsule. Movie posters still hang on the wall of one empty store that sold videos, music and books. “Open for shoppin’” reads the mural not far from a disconnected A.T.M. surrounded by building debris.

Beneath this area builders have discovered one ancient burial site, and Georgian and Victorian brickwork can be seen in an area close to some of the city’s caves.

Mr. Nugent’s committee should have completed its work by the summer, and at least everyone agrees what should not replace the Broadmarsh. “In our consultation with the public we have had over 3,000 individual responses and there’s nobody who’s come and said, ‘We’d like another shopping center please,’” Mr. Mellen said.

Finding an alternative that will satisfy a sometimes rebellious city like Nottingham might prove harder, however. Mr. Nugent muses that in the 1970s, at a time when going shopping became a sort of British religion, the Broadmarsh was a sort of cathedral.

“What we all need to do now is work out what we will worship next, into this new decade and century,” he said. “That is the code that we have to crack, and it’s exciting that Nottingham gets to start this.”

It’s a property that offers a unique open floor plan—plus a hot tub with a view.“It was a Methodist church located in a historic little area of St. … END_OF_DOCUMENT_TOKEN_TO_BE_REPLACED