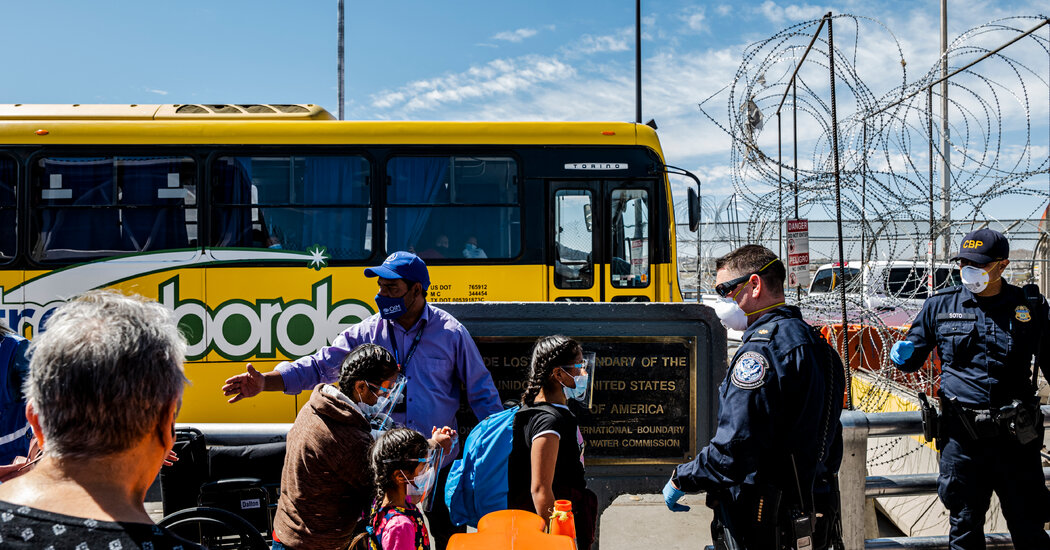 Mexico is struggling to deal with a new wave of migrants expelled from the U.S. while even more come north hoping to cross. Shelters that were empty four months ago are now having to turn many away.

CIUDAD JUÁREZ, Mexico — The migrants’ hopes have been drummed up by human smugglers who promise that President Biden’s administration will welcome them.

Instead, the United States is expelling them back to Mexico, where they wait along with tens of thousands of others hoping to cross. The pressure, and desperation, is quickly building among families stuck in Mexico, as shelters and officials struggle to help them.

In the United States, the federal authorities are scrambling to manage a sharp increase in children who are crossing the border on their own and then being held in detention facilities, often longer than permitted by law. And the twinned crises on both sides of the border show no sign of abating.

Near the crossing with El Paso, Texas, a group of mothers and fathers clutching their children were sobbing as they walked back into Mexico from the United States on Saturday. They walked unsteadily, in sneakers too loose after their shoelaces were confiscated and discarded along with all their other personal items when they were detained by the United States Customs and Border Protection.

the thousands of unaccompanied migrant children who are filling up detention facilities after Mr. Biden said, shortly after taking office, that his administration would no longer turn back unaccompanied minors.

Mexican officials and shelter operators say the number of children, with parents or unaccompanied, is reaching levels not seen since 2018. Late that year, tens of thousands of migrants headed for the border each month, prompting Mr. Trump’s administration to separate families and lock them up. Hundreds of children remain separated from their parents to this day.

as it did during the Trump administration, officials said.

A Mexican Foreign Ministry official said the government was within its right to deport illegal migrants but did not comment on whether raids had increased in recent weeks or whether the Mexican government was responding to a U.S. request.

At the international bridge on Saturday, Dagoberto Pineda, a Honduran migrant, looked shocked as he discreetly wiped away tears and held his 6-year-old son’s hand. He had thought he was entering the United States, but here he was in Ciudad Juárez, crying underneath a Mexican flag. He asked Mr. Valenzuela and New York Times journalists for help: Was he allowed in or not?

massive hurricane hurtled through Mr. Pineda’s town late last year, destroying the banana plantation he worked on, owned by Chiquita Brands International. After years of paying Mr. Pineda about $12 a day to help fill American grocery stores with fresh fruit, the company laid him off. When coyotes offered him a chance to cross into the United States for $6,000 — more than his annual salary — he took it.

Mr. Pineda had crossed from Tamaulipas State into southern Texas, where he was detained by American officials for several days. When he was flown 600 miles to a second detention center in El Paso, Texas, he thought his entry into the United States had finally been granted.

Instead, on Saturday, border patrol agents released him on the Paso del Norte bridge, linking El Paso to Ciudad Juárez, and told him to walk in the direction of the Mexican flags.

Over the past week, Mexican officials and shelter operators like the International Organization of Migration said they had been surprised by the Department of Homeland Security’s new practice of detaining migrants at one point of the sprawling border only to fly them hundreds of miles away to be expelled at a different border town.

The United States is doing this under a federal order known as Title 42. The order, introduced by Mr. Trump but embraced by Mr. Biden, justifies rapid expulsions as a health measure amid the pandemic. But cramming migrants into airplanes and overcrowded detention facilities without any coronavirus testing defeats the purpose of Title 42, observers say.

Stephanie Malin, a spokeswoman for Customs and Border Protection, said that the American authorities had seen “an increase in encounters” but that to adhere to federal guidelines for Covid-19, border officials were “expeditiously” transferring migrants out of their custody.

“Trump got his wall, it’s called Title 42,” said Rubén Garcia, the founder of Annunciation House, one of the largest shelter networks in the United States, based in El Paso.

Still, the new surge of migrants is straining resources throughout the system. Last Sunday, Mr. Garcia said, he was left with barely 30 minutes to prepare after being told by the authorities that 200 migrants were about to be deposited at his shelter, none of them tested for Covid-19.

“I’m on calls with staffers at the White House and D.H.S. and when I’m on those calls I say: ‘You’re not prepared. You’re not prepared for what is about to happen,’” Mr. Garcia said in an interview, using the acronym for the Department of Homeland Security.

Across the border, Mexican officials are also ill-prepared to handle the rising number of migrants, with shelters at a breaking point.

If Mr. Valenzuela’s daughter had not looked up from her book to spot the families crossing the border, all 19 migrants would have been dumped in downtown Ciudad Juárez, one of Mexico’s most dangerous cities, at the mercy of the cartels or human traffickers.

The night before, Mr. Valenzuela welcomed 45 families with little time to prepare.

Under Mr. Trump’s Remain in Mexico Policy, which deported migrants to Mexico to wait out their court cases for asylum in the United States, communication and coordination was better between the various organizations operating along the border, shelter operators and Mexican officials said. Mr. Biden ended that policy in January and promised to start processing some of the 25,000 migrants enrolled in that program. In recent weeks, hundreds have been let in.

Jettner, 29, a migrant from Honduras, is one of those who was allowed in to the United States. After waiting for nearly two years on the border with his wife and two daughters, it took them barely an hour on Friday to be processed and let in. He swiftly went to his sister’s house in Dallas.

As he walked up the bridge, leaving Ciudad Juárez behind as he strode toward El Paso, he was confident. “My life is going to change 180 degrees,” said Jettner, who asked that only his first name be used, fearing reprisals for his family back home. “I am going to a place where I will be well and have a decent roof over the heads of my daughters.”

Though American officials insist that the border is closed to new migrants, that has not stopped thousands from making the dangerous journey north, most from Central America.

Just four months ago, the Filter Hotel shelter in Ciudad Juárez was so empty that they used several rooms as storage. The shelter, run by the International Organization of Migration, now has signs on its door declaring “no space.”

Of the 1,165 people the Filter Hotel has processed since early May, nearly 39 percent were minors, most of them younger than 12, employees said. Its staff often has to shoo smugglers away when they loiter around shelter entrances.

Gladys Oneida Pérez Cruz, 48, and her 23-year-old son, Henry Arturo Menjívar Pérez, who has cerebral palsy, came to the shelter after being expelled from the United States late last month. Shortly after Mr. Biden’s inauguration, smugglers began cruising her neighborhood in Honduras for business, falsely putting out the word that the United States border was open.

Ms. Pérez hoped to join her sister in Maryland, and to find work that would help her afford medicine for her son.

A coyote charged her $9,000 for the trip — a steeper price than she expected, but it came with the promise she would travel by car and his colleagues would help her carry her son across the border, as he had to leave his wheelchair behind. Her sister wired the money. She and her son embarked on the dangerous trek on Feb. 7, she said. Nearly two weeks later, the smugglers dumped them at the border and said they would have to cross on their own.

They managed to cross after hours of effort, but were quickly detained by American border patrol agents and expelled back to Mexico. She has decided to return to Honduras, preferring to face poverty rather than risk being killed or kidnapped in Mexico.

“I apologize for having tried to enter the United States like this, but it was because of my need and my son’s illness,” she said through her tears.

“Biden promised us that everything was going to change,” she said. “He hasn’t done it yet, but he is going to be a good president for migrants.”

Chief Covelli said Mr. Crimo planned the shooting for several weeks, but that the authorities had not yet established what his motive was. “We have no … END_OF_DOCUMENT_TOKEN_TO_BE_REPLACED

Kevin McKenzie and Martine van Hamel were standing in the dining room of their weekend house in Woodstock, N.Y., trying to figure out when they got … END_OF_DOCUMENT_TOKEN_TO_BE_REPLACED