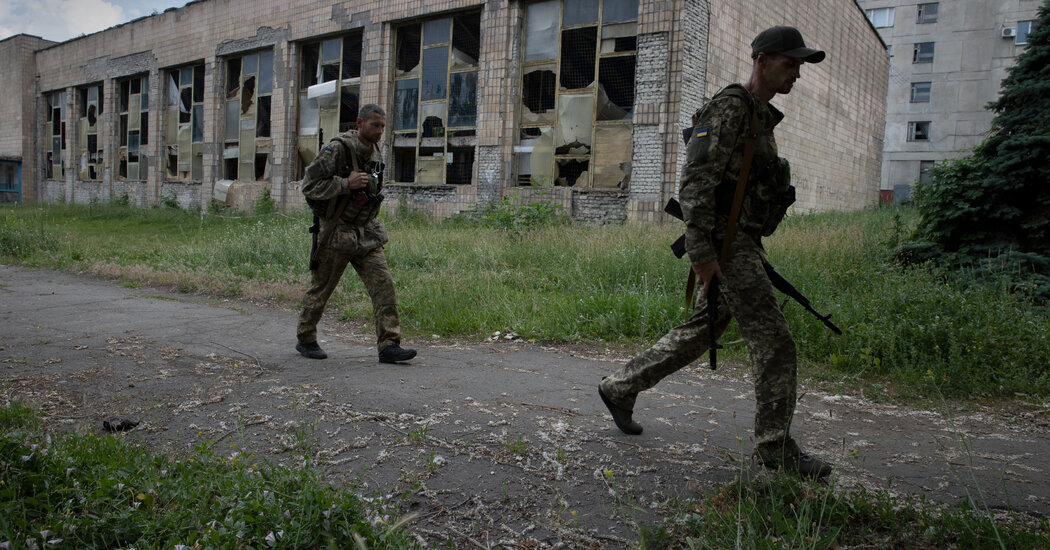 BRUSSELS — Losing ground to Russia’s brutal advance in the east, Ukraine on Monday demanded an arsenal of sophisticated Western weapons many times greater than what has been promised, or even discussed, underscoring the rising pressure on Western leaders to reconsider their approach to the war.

The tactics that served the Ukrainians well early in the war have not been nearly as effective as the fighting has shifted to the open ground of the Donbas region in the east, where Russians are relying on their immense advantage in long-range artillery. Russian forces are poised to take the blasted city of Sievierodonetsk, the easternmost Ukrainian outpost, and are closing in on the neighboring city of Lysychansk.

With the leaders of France, Germany and Italy planning their first visit to Ukraine’s capital, Kyiv, since the war began, they and other Western leaders have to decide whether to double down on arming Ukraine or press harder for negotiations with Moscow to end the war.

running out of ammunition for their Soviet-era artillery, and Ukrainian officials contend that Russian artillery in the east is out-firing their own, 10 to 1.

Mykhailo Podolyak, the Zelensky adviser, said Ukraine needs 300 mobile multiple rocket-launch systems, 1,000 howitzers, 500 tanks, 2,000 armored vehicles and 1,000 drones to achieve parity with Russia in the Donbas region where fighting is concentrated — numbers many times beyond anything that has been publicly discussed in the West. The United States has promised four of the mobile rocket launchers and Britain a few more; Washington has sent a little more than 100 howitzers, and other nations a few dozen more.

faster than Ukrainians can be trained to use them — but Mr. Podolyak, Mr. Zelensky and others clearly mean to keep up the pressure on the West, complaining daily that the current arms flow is woefully inadequate.

mposed tough economic sanctions on Russia, supplied significant financial and military aid to Ukraine, and insisted publicly that it is up to Ukraine’s own, democratically elected leaders to decide how and when to negotiate with Russia.

But they also worry that a long war will bring in NATO countries and even cause President Vladimir V. Putin of Russia to escalate what has been a brutal but conventional campaign. President Emmanuel Macron of France, in particular, has twice said it was important not to “humiliate Russia.”

European officials also worry about the damage being done to their own economies by inflation and high energy prices, and about the likely domestic political backlash. And many in Europe are eager to find a way, even if it’s a temporary cease-fire, to resume Ukrainian grain exports as global food prices soar and parts of the world face a threat of famine.

Such talk raises hackles in Kyiv and in the capitals of Central and Eastern Europe where Russia is most feared, and officials questioned how committed their friends to the west are to beating back Mr. Putin’s aggression. Leaders of several countries that were once part of the Soviet bloc believe this war is about more than Ukraine, and that the Kremlin’s ambitions to re-establish that sphere of influence and overthrow the European security order must be met with defeat, not a cease-fire.

matériel, but fear it could soon be surrounded, trapping a large number of Ukrainian troops.

“For the first time in the modern era,” he wrote, “it would force Moscow to come to terms with what it takes, economically and politically, to become a ‘normal’ nation-state.”

Reporting was contributed by Andrew E. Kramer and Valerie Hopkins from Kyiv, and Thomas Gibbons-Neff from Lysychansk, Ukraine.

The poshest place in California's Coachella Valley is The Madison Club. This exclusive gated community in La Quinta is where A-listers and tycoons … END_OF_DOCUMENT_TOKEN_TO_BE_REPLACED

KOROPY, Ukraine — Four men tugged at long strips of fabric to lift a coffin out of the gaping hole in the backyard of a small house. They flung the … END_OF_DOCUMENT_TOKEN_TO_BE_REPLACED