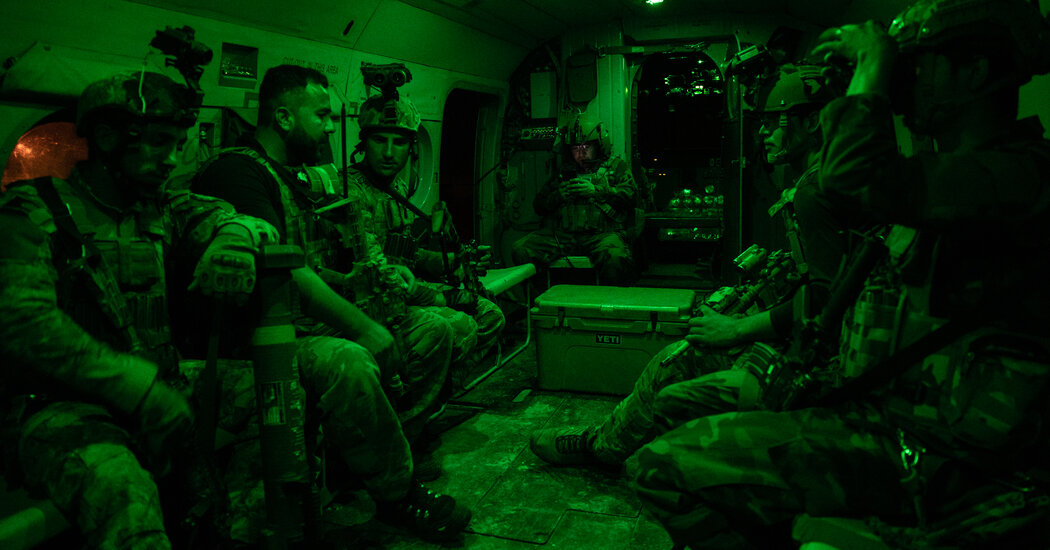 On a recent night raid, a Times photographer captured Afghanistan’s elite forces as they disrupted Taliban operations in one of the country’s most volatile provinces.

Photographs and Text by Jim Huylebroek

SOMEWHERE OVER HELMAND PROVINCE, Afghanistan — As the city lights faded and the Soviet-era military helicopter banked over the fields and canals of southern Afghanistan one night in May, the Afghan commandos on board made their final checks, looking at maps and adjusting their weapons before turning on their night-vision goggles.

Their objective: to dismantle a bomb-making factory inside a squat mud-brick house in Chah Anjir, a village in Nadali, a district in Helmand Province that is completely under Taliban control.

Just days earlier, the Taliban had opened an offensive on Helmand’s capital, Lashkar Gah. Afghan government forces had lost ground. The city was under siege. Frantic to relieve some of the pressure on the capital, security officials committed their most elite of the Afghan special operations forces to the province.

21,000 Afghans in the commando forces, with hopes to greatly expand the program.

more than 20 Afghan commandos were killed when their offensive operation to retake a district in the country’s northwest was derailed by a vicious Taliban counterattack.

The outcome of the May raid, documented on the special forces team leader’s cellphone, was considered a success: bomb-making materials were seized and destroyed. Four Taliban members were killed while his men took no casualties. How much that changed the broader battle’s outcome in Lashkar Gah is questionable, but it kept one of the Taliban’s deadliest tactics — roadside bombs and homemade mines — off the battlefield for a brief time.

The commandos returned to Bost Airfield, a civilian airport. But that night it turned into a temporary command center for the unit. Officials had set up television displays and radios atop its small terminal, under a starry sky as fighting echoed in the distance.

Inside the helicopters as the city came back into view, some commandos joked among themselves, others took forceful drags from cigarettes.

Their mission was over. For now.

Many property purchasers in Alaska possess the same vision: Either hunker down away from the madding crowds in a refined log cabin or operate a … END_OF_DOCUMENT_TOKEN_TO_BE_REPLACED