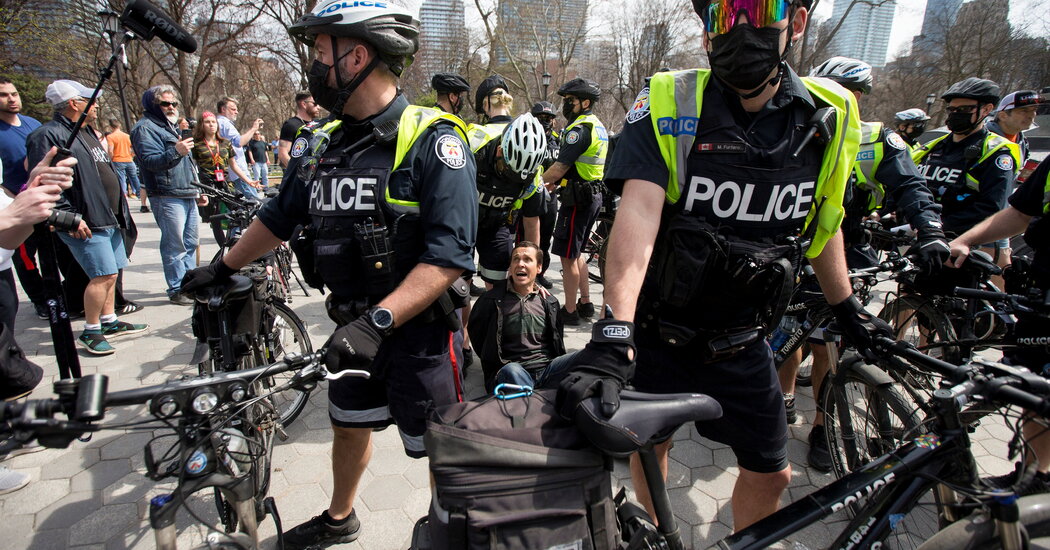 Ontario, Canada’s most populous province, has extended and expanded its stay-at-home orders and given the police sweeping new powers to enforce the mandates in an effort to curb rising case numbers and hospitalizations.

The police will now be able to stop and question people, including those in vehicles, to make sure that their trips outside home are essential. Residents, who are not permitted to gather with members outside their household with some exceptions, could face fines if they do not comply with the new orders. The Ontario government is also expected to restrict travel between Manitoba and Quebec, and the police will set up checkpoints at the provincial borders.

The new measures come amid a sluggish vaccine campaign in Canada and the latest virus wave there, driven largely in Ontario by the highly contagious B.1.1.7 variant first detected in Britain. The increasing case numbers have strained the capacity of intensive care units in many parts of the country.

Canada has inched ahead of the United States in new daily coronavirus cases per capita, and officials warned that worse is to come. By Friday, hospitalizations were up by 22 percent; I.C.U. admissions rose by 34 percent; and each day, 41 people died from Covid-19, a 38 percent increase from the previous week.

a variety of other measures.

The latest measures have been met with criticism, including from public health experts, the mayor of Toronto and several police departments, including the Toronto Police Service, which said on Twitter that it would “not be doing random stops of people or cars.” There were also concerns that asking the police to impose such measures could result in racial profiling.

“I know you are all sick and tired of Covid-19,” Prime Minister Justin Trudeau said on Friday as he urged Canadians to follow their provinces’ rules. “We all just want to be done with this.”

Emergency rooms, particularly in Ontario, are reaching their breaking points, as are intensive care units. In a bid to ease the strain, children’s hospitals in both Ottawa and Toronto opened their I.C.U. beds to adults.

Many factors are behind the increasing numbers. Among them is the arrival of more infectious variants of the virus. An outbreak of P.1, the variant first found in Brazil, spread throughout British Columbia and then into Alberta. Manitoba discovered its first case of the variant this week.

Moderna is delaying deliveries of its vaccine shipment to Canada and other countries, and the Johnson & Johnson vaccine, which has yet to arrive in Canada, has come under safety scrutiny.

Many Canadians are frustrated as they see higher vaccination rates in Britain and the United States.

Canada’s vaccination strategy has been to delay second doses to allow more residents to gain the protection from at least one shot. About 2 percent of Canadians are fully vaccinated compared with 25 percent of Americans, and 19 percent have received at least one dose compared with 39 percent in the United States. Yet the scheduled increases in vaccine shipments — the Moderna slip up aside — should help Canada catch up over the next few weeks.

Millions of cars are recalled each year, and roughly eight million already have been in 2021, according to the National Highway Traffic Safety … END_OF_DOCUMENT_TOKEN_TO_BE_REPLACED

The board of advisers at the digital chamber is stuffed with former federal regulators, including a former member of Congress and a recent chairman of … END_OF_DOCUMENT_TOKEN_TO_BE_REPLACED