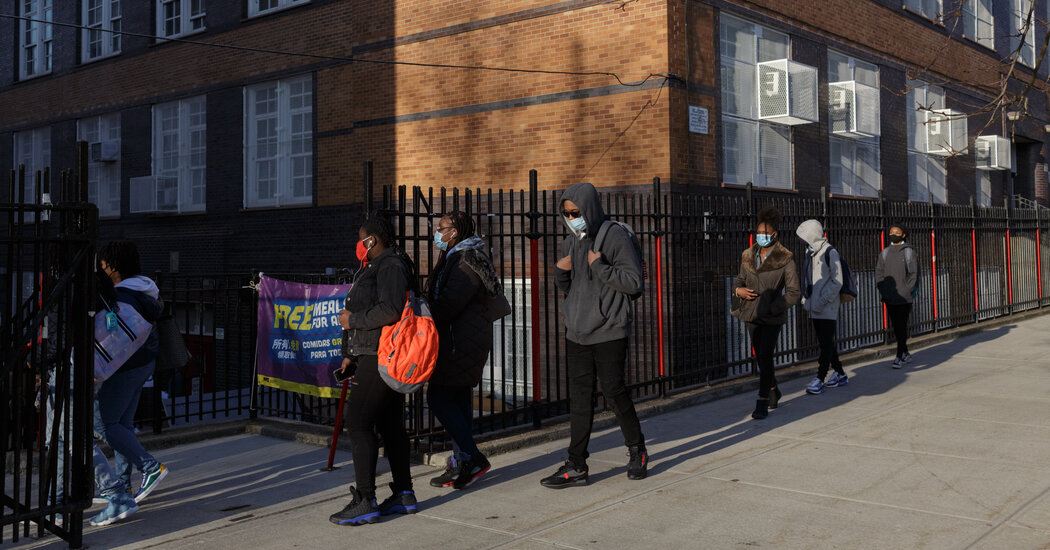 Starting later this month, about 51,000 New York City public school students who have been learning remotely for the past year will be able to return to classrooms, Mayor Bill de Blasio announced on Monday, including middle and high school students.

The announcement marks one of the most significant changes prompted by last month’s guidance from the Centers for Disease Control and Prevention that schools could reduce social distancing between students in classrooms to three feet from six. For now, only elementary schools will switch to three feet.

Students in all grades who signed up for in-person classes over the last several weeks will be able to return starting April 26, Mr. de Blasio said. Previously, the city had committed only to bringing back elementary school students who wanted to switch to in-person classes.

Though a large number of families are eager for their children to return to classrooms, the families of about 650,000 of the city’s roughly 1 million students have decided to have them continue learning from home through the end of the school year in June. The families have made that choice even though the city schools have had very low transmission, and tens of thousands of educators are fully vaccinated. Last week, the city also eased a school closure rule that had led to frequent temporary closures, which frustrated many parents.

It is difficult to generalize why hundreds of thousands of families have chosen to keep their children home. Some parents may prefer a remote schedule for the next few months for the sake of consistency. Other families have expressed concern about stubbornly high test positivity rates in New York City. Some parents of high school students in particular are concerned that their students would be learning from their laptops even in classrooms.

Mr. de Blasio has said he expects most schools to offer full-time instruction for all or most students for the final months of the school year, though some children will still be able to attend in person only for a few days a week. The mayor said the school system would be operating at full capacity come September, with all students able to attend school full-time.

AUSTIN, Texas--(BUSINESS WIRE)--As the first multifamily management company to be recognized in the Public Relations and Marketing Excellence Awards, … END_OF_DOCUMENT_TOKEN_TO_BE_REPLACED

There have been whispers of cooling housing and rental prices in the San Francisco Bay Area, but that hasn't yet translated into practical, noticeable … END_OF_DOCUMENT_TOKEN_TO_BE_REPLACED

Cars pass in Independence Square at twilight in Kyiv, Ukraine, Monday, Oct. 31, 2022. Rolling ... [+] blackouts are increasing across Ukraine as the … END_OF_DOCUMENT_TOKEN_TO_BE_REPLACED