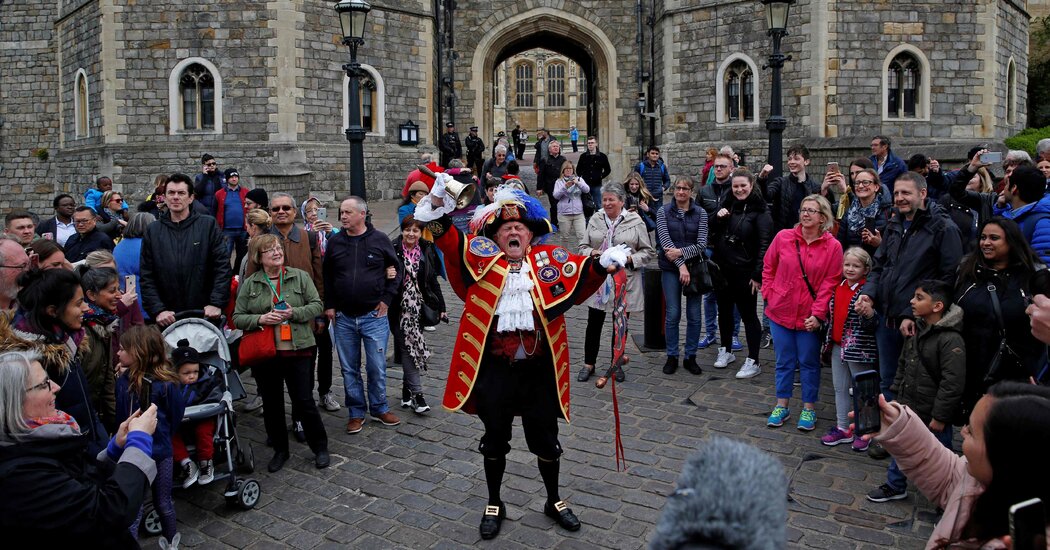 LONDON — Long before newspapers and cable television, it was town criers, with their ringing bells and cries of “Oyez! Oyez! Oyez!” in village squares across Britain who let people know there was news — from plagues to wars to who had done what in the royal family.

But a clear ringing voice, an important quality for the criers of old, will be of no use to those competing in the British Town Crier Championships, which will be held silently for the first time. Entrants will be judged instead on written proclamations of no more than 140 words, known as a “cries.” Each cry must end with the words “God Save the Queen.”

“We can’t have a normal competition,” said Paul Gough, the current champion who is helping to organize the event and is the town crier for the borough of Nuneaton and Bedworth, adding that coronavirus lockdowns made proclaiming to crowds impossible. (Last year the competition was simply canceled.) This year’s format, he said, will give those without the strongest voices, “an opportunity for them to compete on a very level playing field.” Entrants submitted their written cries early this month. A winner is to be announced in mid-May.

In years past, town criers traveled from across the country to whatever town had been selected to host the championship. Wearing flamboyant 18th-century costumes, they represented their respective boroughs and towns by extolling their virtues delivering cries on a particular theme. This year’s theme is nature and the environment.

judged on their delivery — sustained volume, clarity, diction, accuracy — and on the content of the cry and their presentation.

But this year, silence — and the written word — are golden. Mr. Gough said the event will be a fund-raiser for Shout, a mental health help line that also depends on writing — it helps people through texting.

Competitors have taken to the new rules with good humor, and a bit of disappointment.

“What happens if I’m not chosen because they don’t like the way it reads?” said Michael Wood, a three-time national champion and the town crier for the county of East Riding of Yorkshire. “It’s a pity because I don’t have a chance to sell it.” Much of the skill in town crying, he explained, is using the physicality of body movements along with voice to hold an audience’s attention.

Still, this year’s revised competition will make people work to write better cries, Mr. Wood said. And it preserves one thing that helped distinguish a winner in the past: “Always, humor,” he said, which is perhaps a prerequisite for becoming a town crier. “You would have to have a sense of humor to be stood up there in the first place in modern times in period costume.”

Though the silent contest is a solid Plan B, Alistair Chisholm, a national champion from Dorchester, said he was disappointed to miss the competition’s social aspect. “We use this expression, ‘We’re going to return to normality,’” he said. “I’m not sure there’s too much normality about the world of town crier. We’re all slightly oddball and eccentric, but we are very social people and we do like to gather.”

the role was first recognized here as early as 1066, with the appearance of two bellmen in the Bayeux Tapestry, which depicts events leading up to the Norman Conquest. Men were also directed to proclaim the authority of William the Conqueror after he invaded England.

“We were the original newscasters,” said Mr. Gough. For many people who could not read and write, criers were the only way of knowing what was going on.

Mr. Wood said, “As long as there as been a rock to stand on or a pair of shoulders or a tree to climb, there’s always been somebody to shout an announcement in a village or town square.”

Other groups, like the Ancient and Honourable Guild of Town Criers, have also tried to adapt competitions during Covid times — hosting a virtual Zoom competition last June. An entrant from Australia participated at night, though he was spared from ringing the bell for fear of waking the household, said Jane Smith, the group’s secretary.

“You just shout at your computer screen in your garden,” Ms. Smith, a town crier for Bognor Regis, said. “It was an interesting exercise for sure.”

But the spirit of the competition remains the verbal delivery of proclamations: something Ms. Smith said she was sure would return once the pandemic ended. “There’s going to be lots of people shouting and ringing bells and proclaiming that everything is coming to an end, and we’re able to go out and meet people again.”

AUSTIN, Texas--(BUSINESS WIRE)--As the first multifamily management company to be recognized in the Public Relations and Marketing Excellence Awards, … END_OF_DOCUMENT_TOKEN_TO_BE_REPLACED

There have been whispers of cooling housing and rental prices in the San Francisco Bay Area, but that hasn't yet translated into practical, noticeable … END_OF_DOCUMENT_TOKEN_TO_BE_REPLACED

Cars pass in Independence Square at twilight in Kyiv, Ukraine, Monday, Oct. 31, 2022. Rolling ... [+] blackouts are increasing across Ukraine as the … END_OF_DOCUMENT_TOKEN_TO_BE_REPLACED