Pakistan is racing to prevent further loss of life as it reels from one of its worst climate disasters with floodwater threatening to cover up to a third of the country of 220 million people by the end of the monsoon season.

“We’ve had to deploy the navy for the first time to operate in Indo-Pakistan, because much of it resembles a small ocean,” she told German broadcaster Deutsche Welle.

On Monday, the death toll reached 1,061 since mid-June, according to the National Disaster Management Agency (NDMA), as the unrelenting rain raised fears of more fatalities to come.

“By the time this is over, we could well have one quarter or one third of Pakistan under water,” Rehman told Turkish news outlet TRT World on Thursday.

On Monday, new satellite images from Maxar Technologies showed the scale of the disaster – homes and fields completely submerged along the Indus River, as well as the cities of Rajanpur and Rojhan in Punjab, Pakistan’s most populous province. 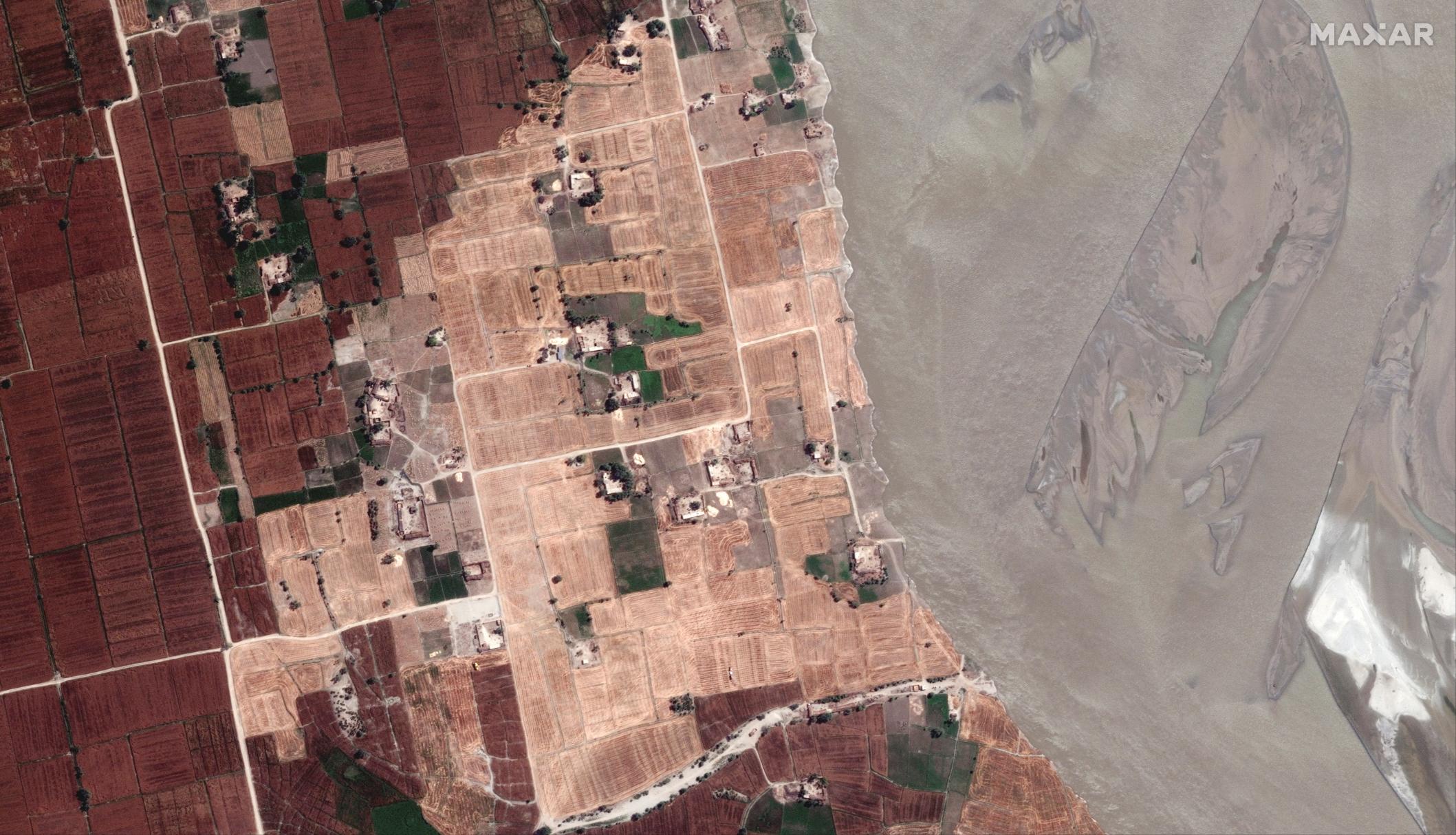 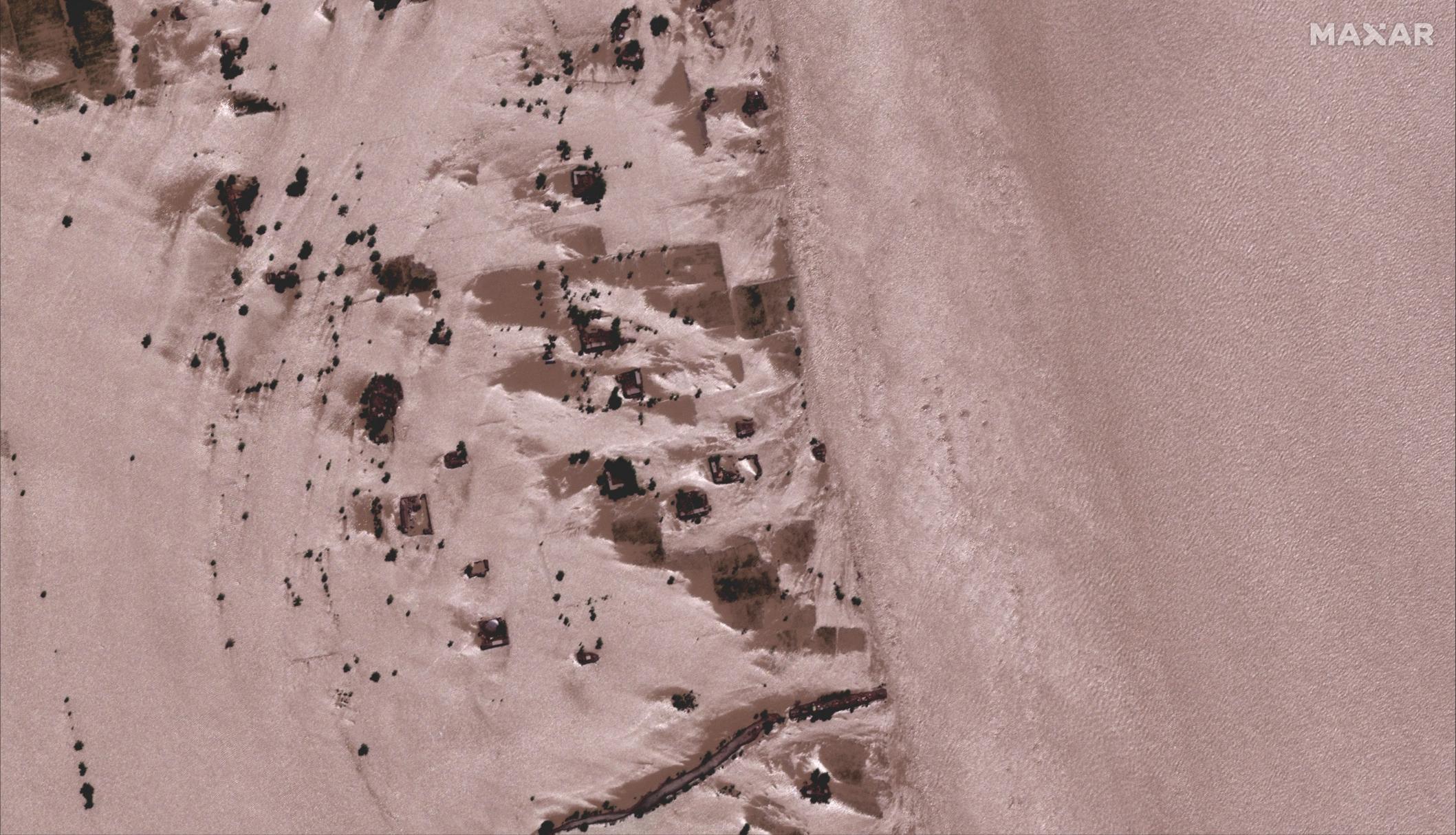 New satellite images showed the scale of destruction in the eastern city of Rojhan in Pakistan near the Indus River.

Video released by the Pakistan Army showed troops staging treacherous rescues by helicopter of people stranded in floodwaters – including one boy trapped on rocks in the middle of a raging river in the northwestern Khyber Pakhtunkhwa province.

Rapid flash floods have destroyed more than 3,000 kilometers (1,864 miles) of road, 130 bridges and 495,000 homes have been damaged, according to NDMA’s latest situation report, making access to flooded areas even more difficult.

“I haven’t seen any destruction or devastation of this scale,” said Butto-Zardari. “I find it very difficult to put into words the phraseologies that we are used to, whether it’s monsoon rains or flooding, doesn’t quite seem to encapsulate the ongoing devastation and disaster that we are still witnessing.”

Pakistani Prime Minister Shehbaz Sharif joined in relief efforts over the weekend, dropping off supplies from a helicopter in areas difficult to reach by boat or land, according to videos from his office.

“Visiting flood affected areas and meeting people. The magnitude of the calamity is bigger than estimated,” Sharif said in a tweet on Saturday. “Times demand that we come together as one nation in support of our people facing this calamity. Let us rise above our differences and stand by our people who need us today.”

After meeting with ambassadors and diplomats in Islamabad on Friday, he called for help from the international community.

On Monday, Peter Ophoff, the IFRC head delegate in Pakistan said the aid network had appealed for more than $25 million to provide urgent relief for an estimated 324,000 people in the country.

“Looking at the incredible damage the floods have caused, it slowly becoming clear to us that relief efforts are going to take a very long time. It is going to be a long-waterlogged road ahead when the people of Pakistan began their journey back to what is remaining of their homes,” Ophoff said.

More than 3.1 million people had been displaced by the “sea-like” flood waters that have damaged more than half a million homes in multiple districts across the country, according to a statement Saturday from the International Federation of Red Cross and Red Crescent Societies (IFRC).

Abrar ul Haq, chairman of the aid network in Pakistan, said Friday that water wasn’t the only challenge for humanitarian workers in the region.

“These torrential floods have severely restricted transportation and mobility. The threat of Covid-19 and damage to vehicles, infrastructure and connectivity are further making our emergency relief works almost impossible. Most of those affected are also immobile or marooned making us hard to reach them,” he said.

‘Monster monsoon of the decade’

Pakistan is already battling through its eighth cycle of monsoon rains, Rehman said Thursday, an anomaly in a country that typically sees three or four such rainy periods per year.

“Pakistan is living through one of the most serious climate catastrophes of the world,” Rehman said in a video statement.

“We are at this point ground zero of the front line of extreme weather events, which we have seen from early this year from an unrelenting cascade of heat waves, forest fires, flash floods, multiple glacier lake outburst events and now the monster monsoon of the decade.”

In his comments Sunday, Butto-Zardari said Pakistan was bearing the brunt of climate change as other countries with bigger carbon footprints do little to reduce their emissions.

“Pakistan contributes negligible amounts to the overall carbon footprint, but we are devastated by climate disasters such as these time and time again, and we have to adapt within our limited resources,” he said.

Danny DeVito and Rhea Perlman have listed their cozy two-bedroom Los Angeles retreat for  $1.55 million.DeVito, who stars in "It's Always … END_OF_DOCUMENT_TOKEN_TO_BE_REPLACED