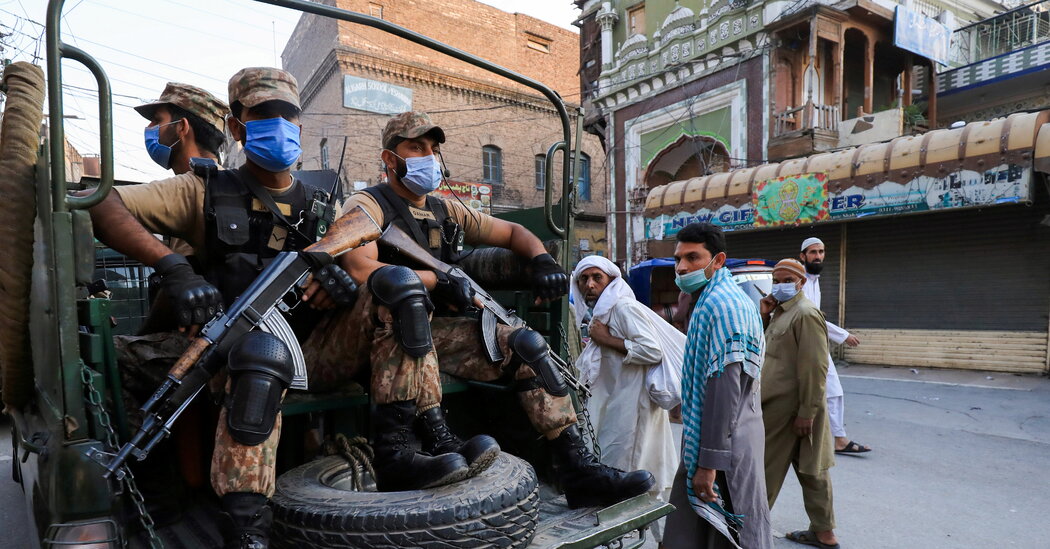 With Covid-19 deaths surging to records in Pakistan this week, the government has sent troops to the streets to help enforce coronavirus precautions, and is warning it may turn to a lockdown if the spread is not controlled.

Pakistan reported 201 deaths on Tuesday, the most in a single day so far, and has counted a total of 17,680 Covid deaths since the pandemic began. More than 5,200 patients are receiving critical care in the country’s hospitals. And there are fears that the virus could rampage through Pakistan the way it is doing in neighboring India if immediate steps are not taken to curb its spread. All travel to India has been banned.

Fawad Chaudhry, the minister for information, said on Thursday that the government will be forced to impose a strict nationwide lockdown if the situation continues to deteriorate.

“Right now, the national positivity rate is 11 percent,” he told reporters in Islamabad, referring to the share of virus tests that are coming back positive. “If it goes up to 14 or 15 percent, we will have no choice but to move toward a lockdown.”

Soldiers are now patrolling streets and markets in more than a dozen cities, telling people to keep wearing masks and making sure mandatory closing times and other safety protocols are followed. Only essential food items and medicines may be sold after 6 p.m.

The approach of the Eid al-Fitr holiday next month, when people typically do more shopping and socializing, has raised concerns.

The government has urged caution and simpler festivities this year. Travel between cities and between provinces will be banned from May 8 until May 16, and hotels, public parks and tourist facilities will be closed.

Vaccination efforts in Pakistan, with a population of more than 200 million, are progressing slowly. Health officials say 2 million vaccine doses have been administered so far, initially focused on people over 60 and health care workers. Eligibility will expand on Monday to include anyone over 40. By June, the country expects to have received 18.7 million doses, most of them to be distributed free by the government, though the private sector has been allowed to obtain some doses for sale to affluent patients.

Mariam Chaudhry, an Islamabad resident, is waiting her turn under the government program. She said she wanted to be vaccinated so she could move around and travel safely, but others were being prompted more by the recent dire news from across the border.

“People were reluctant to inject new vaccines with unknown side effects,” Ms. Chaudhry said. “But the situation in India has delivered a powerful wake-up call. With catastrophe at the doorsteps, rising numbers of people are now rushing to inoculate.”

Three men were indicted in the death of the notorious gangster James (Whitey) Bulger, who was beaten to death four years ago in a West Virginia … END_OF_DOCUMENT_TOKEN_TO_BE_REPLACED

Dr. Connolly and Dr. Mott live in the North Baltimore neighborhood of Homeland, known for its strong public schools and colonial architecture, which … END_OF_DOCUMENT_TOKEN_TO_BE_REPLACED