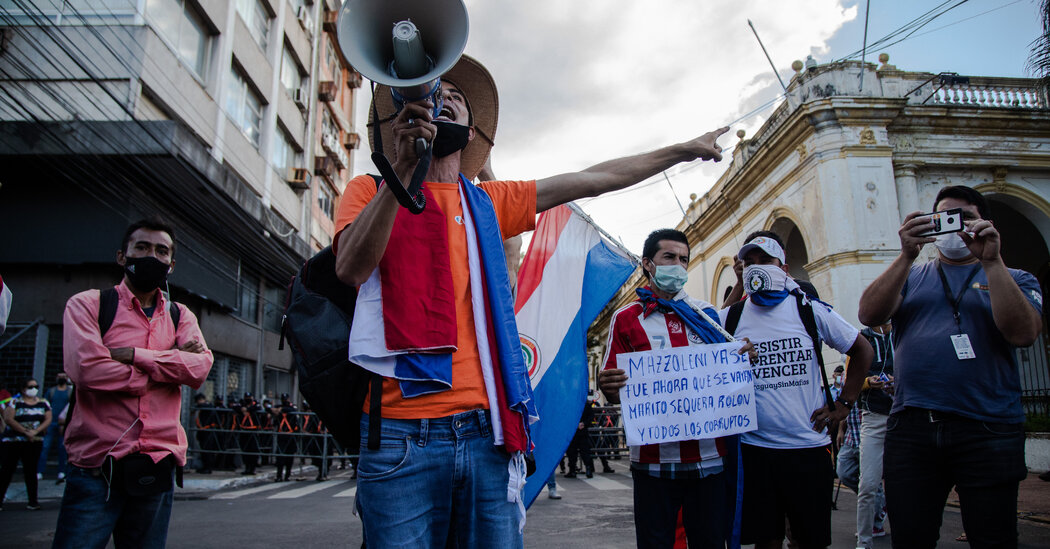 President Mario Abdo Benítez of Paraguay faced calls for his resignation and large street protests over the weekend as Paraguayans decried the dismal state of the public health system, under strain amid a record number of coronavirus infections.

Paraguay, one of the poorest countries in South America, has received just a few thousand doses of Covid-19 vaccine. Julio Mazzoleni, the health minister, resigned Friday as critical care units in hospitals became full and doctors ran out of basic drugs.

Hours after Mr. Mazzoleni stepped down, thousands took to the streets in downtown Asunción, the capital, to call for the resignation of Mr. Abdo Benítez, a conservative leader who assumed office in August 2018.

Protesters and opposition lawmakers said the country’s health crisis had been exacerbated by pervasive corruption at all levels of public procurement and spending.

“Paraguayans have already paid for drugs and vaccines that aren’t here,” said lawmaker Efraín Alegre, the head of the main opposition party, the Liberal Party. “It’s not the fault of Paraguayan people — it’s a serious corruption problem.”

As lawmakers called for his impeachment, Mr. Abdo Benítez on Saturday called on all his ministers to draft resignation letters. By the end of the day, he accepted the resignations of three ministers, including the minister of education.

The outcry began on Wednesday when medical professionals held a protest in Asunción to call attention to the scarcity of basic medical supplies. The health care workers said they had run out of drugs for chemotherapy treatment and sedatives for patients who needed to be intubated.

For now, Mr. Abdó Benítez appears to have enough support in Congress to avoid impeachment. But protesters across the country have said they intend to continue holding demonstrations until his government falls.

Paraguay shut down its borders and implemented strict measures early in the pandemic, which spared it initially from the large outbreaks seen in neighboring countries like Brazil and Argentina. But infections have surged in recent weeks, reaching a peak on March 4, when health officials reported 1,439 new cases.

The health ministers of three other countries in South America — Peru, Ecuador and Argentina — have stepped down in recent weeks amid scandals and criticism of the ways in which governments have handled vaccine distribution and other aspects of the response to the pandemic.

Chief Covelli said Mr. Crimo planned the shooting for several weeks, but that the authorities had not yet established what his motive was. “We have no … END_OF_DOCUMENT_TOKEN_TO_BE_REPLACED

Kevin McKenzie and Martine van Hamel were standing in the dining room of their weekend house in Woodstock, N.Y., trying to figure out when they got … END_OF_DOCUMENT_TOKEN_TO_BE_REPLACED