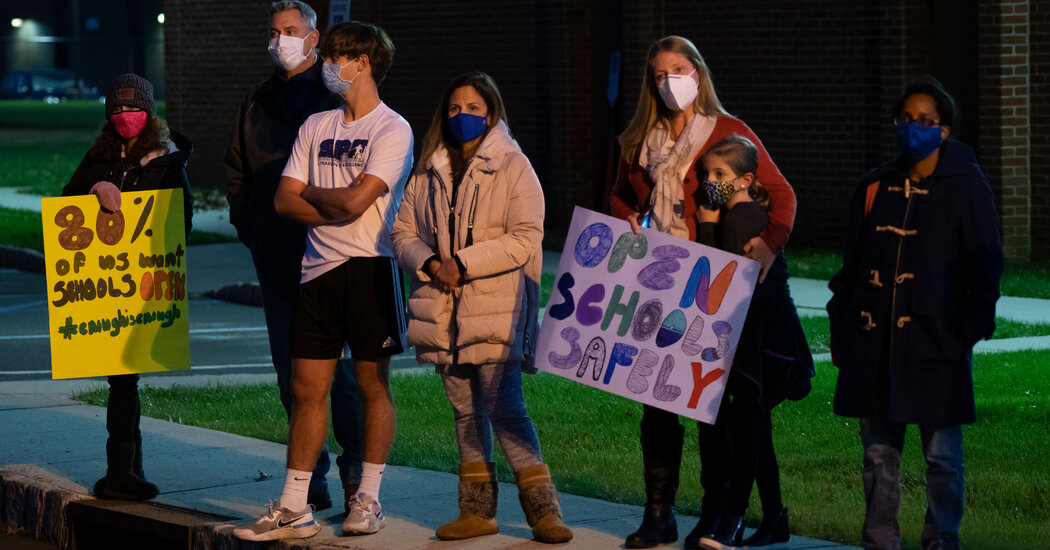 Most school districts in New Jersey have partly reopened, but one in four children still live in a district where public schools are closed. No state in the Northeast had more districts relying on all-virtual teaching in early March than New Jersey, according to Return to Learn, a database created by a conservative think tank, the American Enterprise Institute, and Davidson College. Nationwide, only seven states had a greater proportion of all-remote instruction.

As the distribution of vaccines has accelerated and President Biden has signaled a push for broader reopenings, frustration among parents has grown, particularly in New Jersey’s affluent suburbs, where schools with stellar reputations are a key reason families are willing to pay some of the nation’s highest taxes.

These parents have filed federal lawsuits, held protests, created online petitions and shown up at virtual board of education meetings to demand expanded in-person instruction.

The pressure to open schools more fully comes as the infection rate in New Jersey, which is small and densely populated, remains stubbornly high: With a weekly average of 45 cases for every 100,000 residents, the state leads the nation in new infections per capita, according to a New York Times database.

major policy shift on Friday, reducing its distancing recommendations to three feet from six feet for all elementary schools and for middle and high schools in areas where the virus infection rate is not high.

Anger at the pace of reopening has led some families who can afford it to enroll their children in private schools, start home-schooling them or move. If enough children leave a district in New Jersey, it could lead to cuts in state aid, scaled-back programming or potentially layoffs.

Several New Jersey cities and counties have held educator-only vaccine distribution events. But the virus’s hold on the state has left teachers and their powerful unions wary of expanded reopening.

An affordable center-chimney Colonial in Glastonbury, CT, is the oldest property to hit the market this week on Realtor.com®.Offered at a steep … END_OF_DOCUMENT_TOKEN_TO_BE_REPLACED

Nissan was one of the early pioneers of the electric car. The Leaf has now sold over 600,000 units worldwide since its launch in 2011 and is still … END_OF_DOCUMENT_TOKEN_TO_BE_REPLACED

RUDNE, Ukraine — Yurii Brukhal, an electrician by trade, didn’t have a very dangerous role when he volunteered for Ukraine’s territorial defense … END_OF_DOCUMENT_TOKEN_TO_BE_REPLACED