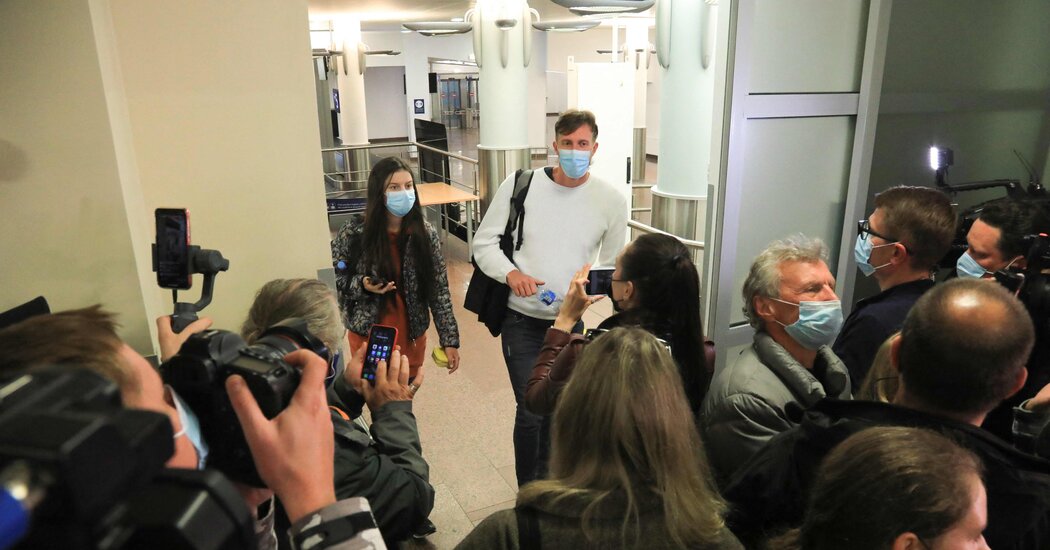 The tray tables were being raised and the seat backs returned to the upright position as passengers on Ryanair Flight 4978 prepared for the scheduled landing in the Lithuanian capital, Vilnius. Then, suddenly, the plane made an abrupt U-turn.

There was no explanation given.

It would be roughly 15 minutes before the pilot came over the intercom and announced that the plane would be diverting to Minsk, the capital of Belarus, according to those on board.

For many passengers, it seemed, at first, it was most likely just one of those unexpected delays that can be part of airline travel — perhaps a technical problem, some speculated.

For one passenger, however, the situation was clear. And frightening.

Roman Protasevich, a prominent Belarusian opposition journalist who had been living in exile since 2019, started to panic.

told the Lithuanian broadcaster LRT upon arrival in Vilnius. “He said: ‘I know that death penalty awaits me in Belarus.’”

told a Lithuanian news website that the pilot was “visibly nervous” during the landing in Minsk.

Alyona Alymova, one of the passengers, wrote about the experience in a Facebook post, noting that for much of the time there was only “light anxiety.”

“There was no clear understanding of what was going on,” she wrote.

Some passengers learned about the bomb threat only hours later, when they could connect to the internet.

In an Instagram post, one passenger said that they were “treated as prisoners in Minsk.” Hours later, they were allowed in an airport lounge area with a small cafeteria.

“I want to see who will be responsible for this chaos,” she said.

AUSTIN, Texas--(BUSINESS WIRE)--As the first multifamily management company to be recognized in the Public Relations and Marketing Excellence Awards, … END_OF_DOCUMENT_TOKEN_TO_BE_REPLACED

There have been whispers of cooling housing and rental prices in the San Francisco Bay Area, but that hasn't yet translated into practical, noticeable … END_OF_DOCUMENT_TOKEN_TO_BE_REPLACED

Cars pass in Independence Square at twilight in Kyiv, Ukraine, Monday, Oct. 31, 2022. Rolling ... [+] blackouts are increasing across Ukraine as the … END_OF_DOCUMENT_TOKEN_TO_BE_REPLACED