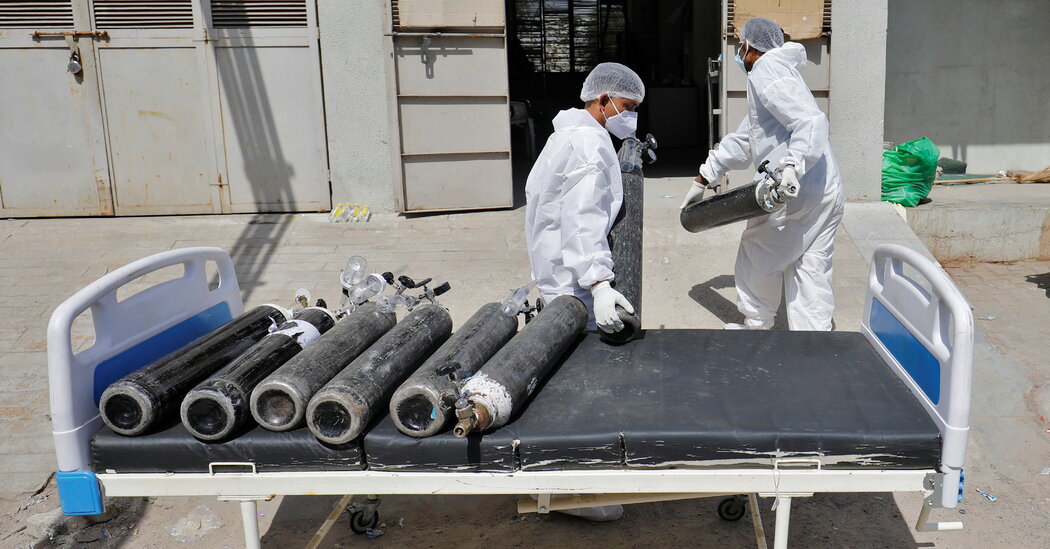 NEW DELHI — A catastrophic second wave of the coronavirus is battering India, which is reporting the world’s highest number of new infections as hospitals and patients beg for fast-diminishing oxygen supplies and other emergency aid.

India recorded more than 330,000 coronavirus cases in 24 hours, the health ministry said on Friday, the second consecutive day that the country has set a global record for daily infections.

Canada has joined Britain, Hong Kong, Singapore and New Zealand in barring travelers coming from India. And the U.S. State Department advised people against going to India after the Centers for Disease Control raised the risk level to its highest measure.

Facing a barrage of criticism for his government’s handling of the second wave, Prime Minister Narendra Modi canceled plans to travel to West Bengal for a campaign rally as an election takes place in that state.

continued to hold mass rallies with thousands of people unmasked. The government has also allowed an enormous Hindu festival to draw millions of pilgrims despite signs that it has become a superspreader event.

The catastrophe in India is playing out vividly on social media, with Twitter feeds and WhatsApp groups broadcasting hospitals’ pleas for oxygen and medicines, and families’ desperate searches for beds in overwhelmed Covid-19 wards. With many hospitals short of ventilators, television reports have shown patients lying inside ambulances parked outside emergency rooms, struggling to breathe.

Swati Maliwal, an activist and politician in Delhi, tweeted that her grandmother had died while waiting to be admitted outside a hospital in Greater Noida near New Delhi.

“I kept standing there for half hour and pleading for admission and nothing happened,” she wrote. “Shame! Pathetic!”

The death toll from the virus rose more than 2,200 on Friday, a new high.

On Thursday, Fortis Healthcare, one of India’s top hospital chains, tweeted an S.O.S. message to Mr. Modi and his chief deputy, Amit Shah, the minister for home affairs, appealing for more oxygen at a hospital in Haryana State on the Delhi border.

At least 22 patients were killed in a hospital in the city of Nashik on Wednesday after a leak cut off their oxygen supplies.

Beginning on Saturday, Indians age 18 or older can register for a Covid-19 vaccine, but demand is expected to far outstrip supply. So far, more than 135 million people have received at least one dose, about a tenth of India’s population of nearly 1.4 billion. Two vaccines have received emergency use authorization, with at least five others in the pipeline.

You were seeing double this week: A spectacular $54 million compound featuring two equally luxurious mansions separated by a private lake in Southwest … END_OF_DOCUMENT_TOKEN_TO_BE_REPLACED

Taylor Heinicke #4 of the Washington Football Team celebrates after defeating the Seattle Seahawks at FedExField on November 29, 2021 in Landover, … END_OF_DOCUMENT_TOKEN_TO_BE_REPLACED

Members of the Ukrainian Police force, Larisa, 31, and Roman, 30, get married at a wedding hall at an expo center in Kyiv, Ukraine, on … END_OF_DOCUMENT_TOKEN_TO_BE_REPLACED