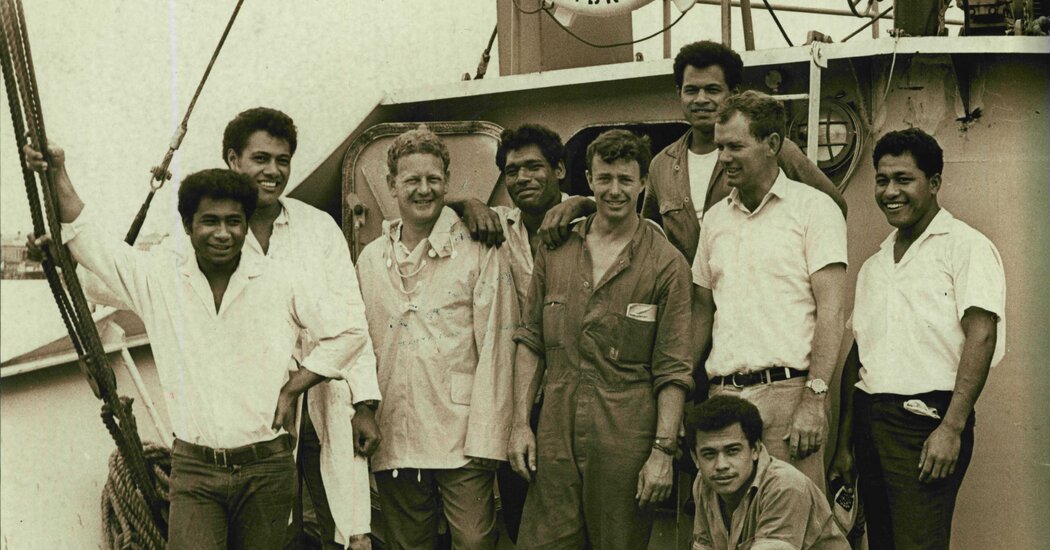 Peter Warner, an Australian seafarer whose already eventful life was made even more so in 1966 when he and his crew discovered six shipwrecked boys who had been living on an uninhabited island in the South Pacific for 15 months, died on April 13 in Ballina, New South Wales. He was 90.

His death was confirmed by his daughter Janet Warner, who said he had been swept overboard by a rogue wave while sailing near the mouth of the Richmond River, an area he had known for decades. A companion on the boat, who was also knocked into the water, pulled Mr. Warner to shore, but attempts to revive him were unsuccessful.

The story of the 1966 rescue, which made Mr. Warner a celebrity in Australia, began during a return sail from Nuku’alofa, the capital of Tonga, where he and his crew had unsuccessfully requested the right to fish in the country’s waters. Casually casting his binoculars at a nearby uninhabited island, ‘Ata, he noticed a burned patch of ground.

“I thought, that’s strange that a fire should start in the tropics on an uninhabited island,” he said in a 2020 video interview. “So we decided to investigate further.”

an interview with Vice this year. “And when I compare it to what I gained at school, I think I learned more on the island. Because I learned how to trust myself.”

Back in Tonga, Mr. Warner was greeted as a hero. King Taufa’ahau Tupou IV, who had earlier denied him fishing rights, reversed himself. But the owner of the stolen boat was not in a celebratory mood, and he had the boys arrested. He dropped the charges after Mr. Warner offered to compensate him.

The story captivated Australia; a year later the Australian Broadcasting Corporation sent Mr. Warner and the boys back to the island to recreate aspects of their ordeal for a film crew. Other documentaries and newspaper features followed.

Lord of the Flies,” William Golding’s 1954 novel about a group of boys stranded on an island who descend into murderous anarchy. But this was nothing like Mr. Golding’s book: The six boys flourished in their spontaneous community, suggesting that cooperation, not conflict, is an integral feature of human nature.

“If millions of kids are required to read ‘Lord of the Flies,’ maybe they should also be required to learn this story as well,” the Dutch historian Rutger Bregman, who wrote about the episode in his book “Humankind: A Hopeful History” (2020), said in an interview.

Peter Raymond Warner was born on Feb. 22, 1931, in Melbourne, Australia, to Arthur George Warner and Ethel (Wakefield) Warner. Arthur Warner was one of the country’s wealthiest men, having built a manufacturing and media empire, and he expected his son to follow him in the family business.

But Peter was uninterested; he preferred boxing and sailing, and at 17 he ran away from home to join a ship’s crew. When he returned a year later, his father made him go to law school at the University of Melbourne.

He lasted six weeks. He ran away again, this time to sail for three years on Swedish and Norwegian ships. Quick with languages, he learned enough Swedish to pass the master mariner’s exam, allowing him to captain even the largest seagoing vessels.

a 1974 interview. He returned two days before the wedding, and afterward the couple took a five-month honeymoon aboard a cargo ship sailing between Australia and Japan.

Along with his daughter Janet, his wife survives him, as do another daughter, Carolyn Warner; a son, Peter; and seven grandchildren.

In 1965 Mr. Warner bought several crayfish boats, which he operated around Tasmania. But the grounds around Australia were overfished, and he ventured further and further east, eventually taking him to Tonga — and his encounter with ‘Ata.

After he discovered the six boys, Mr. Warner moved with his family to Tonga, where they lived for 30 years before returning to Australia. He hired all six as crew members; he remained especially close to Mr. Totau, who sailed with him for decades.

In 1974, they were fishing near the Middleton Reef, about 300 miles east of Australia, when Mr. Totau spied four sailors on a small island, where they had been stranded for 46 days.

Mr. Warner converted to the Baha’i faith in 1990 and later gave up commercial fishing to start a company that harvested and sold tree nuts.

He wrote three books of memoirs, the second of which, “Ocean of Light: 30 Years in Tonga and the Pacific” (2016), detailed his encounter at ‘Ata.

an excerpt from his book in The Guardian. It garnered more than seven million page views and set off a new round of interest in the boys’ story, including offers from film production companies. In May 2020 it was announced that the four surviving boys, now old men, along with Mr. Bregman and Mr. Warner, had sold the film rights to New Regency.

Although he was accused by some of trying to win fame off the Tongans’ story, Mr. Warner always insisted that it was theirs to tell, and that he would rather spend his time sailing.

Three men were indicted in the death of the notorious gangster James (Whitey) Bulger, who was beaten to death four years ago in a West Virginia … END_OF_DOCUMENT_TOKEN_TO_BE_REPLACED

Dr. Connolly and Dr. Mott live in the North Baltimore neighborhood of Homeland, known for its strong public schools and colonial architecture, which … END_OF_DOCUMENT_TOKEN_TO_BE_REPLACED