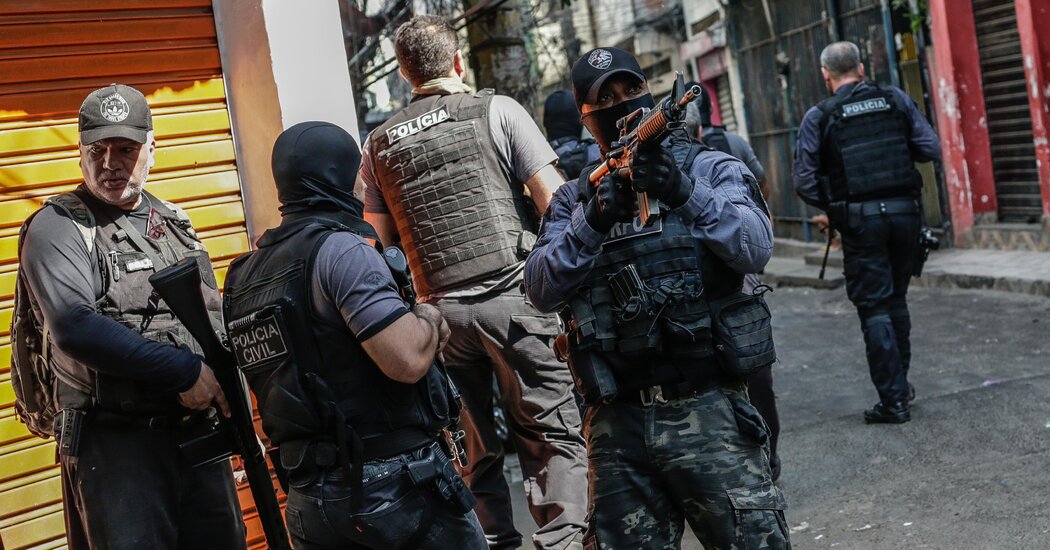 RIO DE JANEIRO — A police operation targeting drug dealers in Rio de Janeiro on Thursday morning left at least 25 people dead, including a police officer, in an operation that officials and human rights activists called the deadliest in the city’s history.

The gun battle in Jacarezinho, a poor and working-class district controlled by the drug gang known as Comando Vermelho, or Red Command, also wounded at least two subway passengers who were struck as their train was caught in the crossfire.

Residents and human rights activists accused the police of using excessive force and questioned why the operation was launched at all, given a Supreme Court ban on law enforcement raids in the city during the pandemic.

a record high. Officers are seldom subject to criminal investigation or prosecution.

Gun battles between the police and gang members in Rio de Janeiro are routine. Heavily armed traffickers act as the de facto authority in vast areas of the city, including Jacarezinho, where drugs are sold in plain sight.

Elected officials who have been critical of the police denounced Thursday’s raid.

“The slaughter in Jacarezinho is a typical example of the barbarities that happen in favelas in Rio,” Talíria Petrone, a federal lawmaker from Rio de Janeiro, said in a statement. “It’s the state doing the minimum to guarantee rights and doing the maximum to repress and kill.”

A Supreme Court justice last June banned routine police operations in Rio de Janeiro during the pandemic. The justice, Edson Fachin, said the police could carry out only those operations considered “absolutely exceptional.”

Joel Luiz Costa, a lawyer from Jacarezinho, said he visited several homes in which people were killed on Thursday and saw evidence that residents had been executed.

he said during his swearing in ceremony on Saturday.

Rodrigo Oliveira, the police chief, said his officers had conducted themselves lawfully.

“The only execution that took place was that of the police officer,” he said. “The other deaths that occurred were those of traffickers who attacked the police and were neutralized.”

A sprawling waterfront compound on the eastern side of Lake Tahoe has hit the market for $55 million.Known as the Wovoka estate, it is owned by … END_OF_DOCUMENT_TOKEN_TO_BE_REPLACED

America is absorbing the shock of another bloody mass shooting, a day after an 18-year-old man wearing body armour and carrying assault rifles entered … END_OF_DOCUMENT_TOKEN_TO_BE_REPLACED