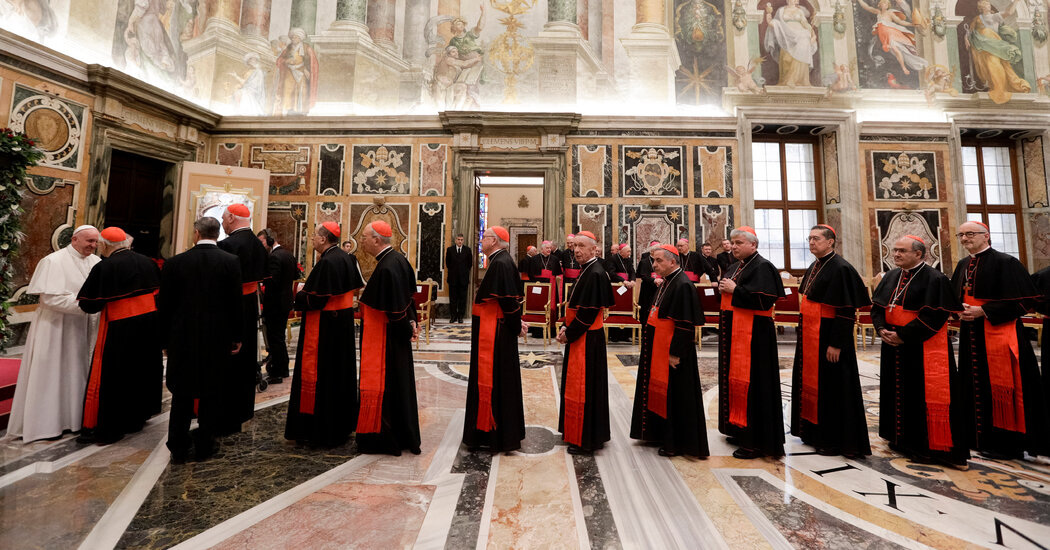 ROME — In an effort to fight corruption in the highest ranks of the Roman Catholic Church, Pope Francis issued a sweeping new decree on Thursday compelling top managers at the Vatican — including cardinals — to provide full financial disclosures and to refuse any gifts worth more than roughly $50.

In taking aim at matters both large and small — from real estate holdings and investments to work-related gifts given to any Vatican employee — Pope Francis said his goal was to bring the church into accord with the best practices on fighting corruption and financial transparency.

The decree was made in an apostolic letter, under the pope’s own legal authority, and was added to the rules governing the Roman Curia, which is responsible for the day-to-day running of the church.

It requires that all senior management and administrators at the Vatican sign a declaration stating that they have never been investigated, or have been tried and subsequently convicted or pardoned, for crimes involving corruption, fraud, exploitation of minors, human trafficking, terrorism, money laundering or tax evasion. They must also update the disclosure every two years.

Senior Vatican staff are now also banned from putting their savings in tax havens or in companies in countries at high risk of money laundering, either directly or through third parties.

They cannot own any goods or invest in real estate bought with funds from illegal activity. Nor can they have shares or interests in companies whose policies are contrary to the Church’s social teachings.

More broadly, all Vatican employees are banned from receiving gifts worth more than 40 euros — about $50.

The decree is part of an ongoing effort to hold church officials accountable and builds on changes put in place in May, when the pope tightened rules for procurement contracts by Vatican departments.

“Corruption can be manifested in different manners and forms even in various sectors other than that of procurement,” the pope wrote in the preamble to the decree, explaining the need to draft further regulations.

He said the new rules were in keeping with the guidelines of the United Nations Convention Against Corruption.

Anyone found making a false declaration can be fired, the pope added, tasking the Vatican’s Secretariat of the Economy with ensuring that declarations are truthful.

The Seattle Seahawks are very much still in the running for Baker Mayfield. (Photo by Stacy ... [+] Revere/Getty Images) Getty Images The Seattle … END_OF_DOCUMENT_TOKEN_TO_BE_REPLACED

LANSING, Mich. — At least 357 sitting Republican legislators in closely contested battleground states have used the power of their office to discredit … END_OF_DOCUMENT_TOKEN_TO_BE_REPLACED