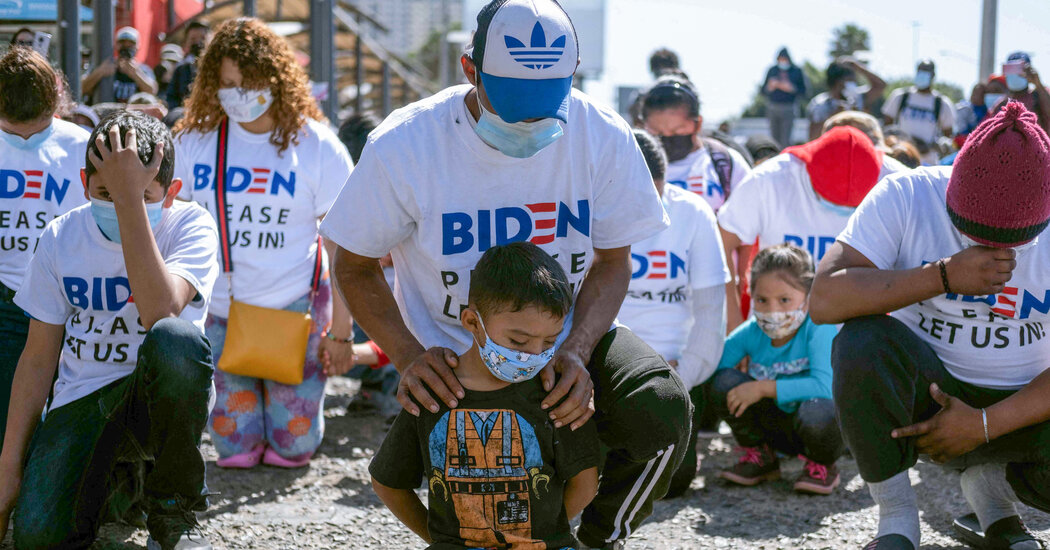 WASHINGTON — Thousands of migrant children are backed up in United States detention facilities along the border with Mexico, part of a surge of immigration from Central Americans fleeing poverty and violence that could overwhelm President Biden’s attempt to create a more humane approach to those seeking entry into the country.

The number of migrant children in custody along the border has tripled in the past two weeks to more than 3,250, according to federal immigration agency documents obtained by The New York Times, and many of them are being held in jail-like facilities for longer than the three days allowed by law.

The problem for the administration is both the number of children crossing the border and what to do with them once they are in custody. Under the law, the children are supposed to be moved to shelters run by the Health and Human Services Department, but because of the pandemic the shelters until last week were limiting how many children they could accommodate.

refused to call a “crisis” but could nevertheless become a potent political weapon for his Republican adversaries and upend his efforts to legalize millions of undocumented immigrants.

The president has proposed overhauling the nation’s decades-old immigration system by making it easier for asylum seekers and refugees, expanding legal pathways for foreign workers, increasing opportunities for family-based immigration and vastly reducing threats of mass deportations. His State Department announced on Monday that foreigners rejected after Jan. 20, 2020, under Mr. Trump’s travel ban could try to obtain visas without paying additional fees.

Hundreds of migrant families are also being released into the United States after being apprehended at the border, prompting predictable attacks by conservatives.

Liberal politicians are denouncing the expansion of detention facilities and railing against the continued imposition of Trump-era rules intended to prevent the spread of the coronavirus from immigrants. And advocates for families separated at the border during Mr. Trump’s administration are pressuring the president to move faster to reunite them.

Together, it has put Mr. Biden on the defensive in the early days of his presidency as he attempts to demonstrate a tone very different from his predecessor’s.

The immigration system Mr. Biden envisions will take months, if not years, to be fully implemented, forcing the administration to scramble to find space for children and rely, for now, on a rule that swiftly returns adults and most families to their home countries.

For now, Mr. Biden has broken from his predecessor in not applying the pandemic emergency rule to children, meaning the United States is still responsible for caring for them until they are placed with a sponsor.

But for now, using the same pandemic rule the Trump administration did, the Biden administration has continued to turn away most migrants other than unaccompanied children.

And almost as soon as Mr. Biden came into office, top administration officials publicly sought to discourage migrants from traveling north, saying it would take time to unravel Mr. Trump’s policies. Previous public messaging campaigns, including standing up billboards in Central America to encourage migrants to stay home, have failed.

“Realistically, one is addressing a population of people that are desperate,” Mr. Mayorkas said in an interview. “It is not going to work 100 percent, but if it is effective at all, that is of momentous importance not only to what we are trying to do but for the well being of the people.”

Some families are being released into the United States. Border agents have not been able to turn away migrant families in South Texas because of a change in Mexican law that bans the detention of small children.

Administration officials point to a flurry of actions underway aimed at fixing what they say is a broken immigration system: improving communications between the Border Patrol and the health department, including whether the children being transported to the long-term centers are boys or girls; streamlining background checks for shelter employees; and vaccinating border workers against the coronavirus.

They are also accelerating efforts to get new facilities to care for children during the weeks and months that it takes to find relatives or foster parents. They are considering unused school buildings, military bases and federal facilities that could be rapidly converted into places acceptable for children.

And they are restarting a program in Central America that will allow children to apply for asylum without making the dangerous trek to the border. Mr. Trump ended the program, which Biden administration officials said would eventually reduce the flow of migrant children to the United States.

But all of that will take time. Meanwhile, officials say, they recognize that the pressure on Mr. Biden will only increase.

“At every step of the way we’re looking at where are the bottlenecks and then trying to eliminate those bottlenecks and yes it won’t be solved by tomorrow,” said Esther Olavarria, the deputy director for immigration at the White House’s Domestic Policy Council. “But if you don’t start to do each of these things, you are never going to solve the problem.”

In the grand sweep of world history, the U.S. is a young country. Even so, there are plenty of homes built prior to the American Revolution that still … END_OF_DOCUMENT_TOKEN_TO_BE_REPLACED

DONETSK REGION, Ukraine — Between the cracks of mortar fire and the metallic bangs of Russian self-detonating mines, Yurii, a Ukrainian Army medic, … END_OF_DOCUMENT_TOKEN_TO_BE_REPLACED