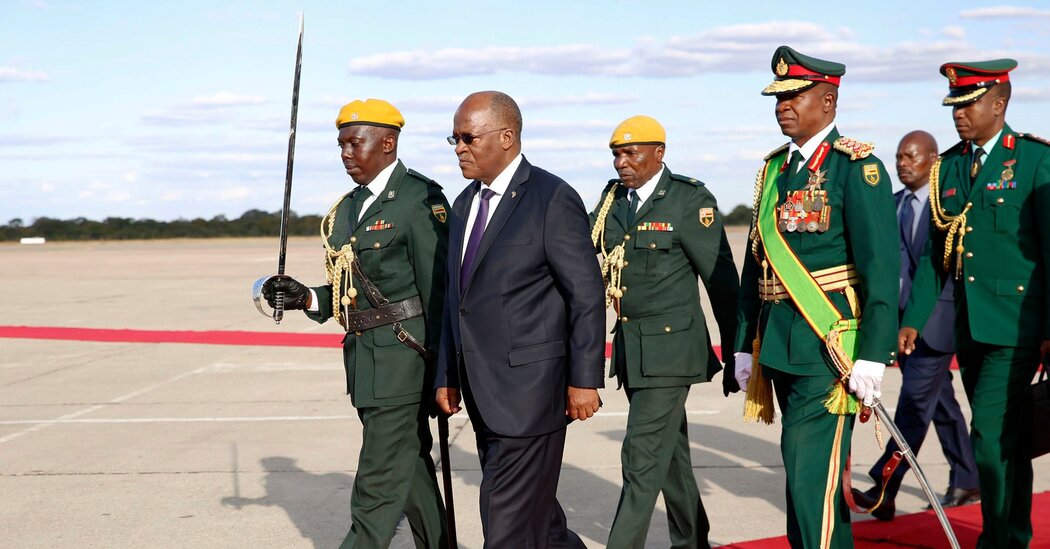 NAIROBI, Kenya — President John Magufuli of Tanzania, a populist leader who played down the seriousness of the coronavirus pandemic and steered his country away from democratic ideals, died on Wednesday at a hospital in the port city of Dar es Salaam. He was 61.

His death was announced on television by Vice President Samia Suluhu Hassan, who said Mr. Magufuli had died of heart complications while being treated at Mzena Hospital. The announcement followed more than a week of intense speculation that Mr. Magufuli was critically ill with Covid-19 — reports that senior government officials had repeatedly denied.

Ms. Hassan did not specify the nature of Mr. Magufuli’s underlying illness in her brief televised remarks, but said that he had suffered from chronic atrial fibrillation for more than a decade. She said that flags will fly at half-staff nationwide and that funeral arrangements were underway.

Mr. Magufuli, a trained chemist, was first elected in October 2015 on an anticorruption platform. He was initially lauded for his efforts to bolster the economy, stem wasteful spending and upgrade Tanzania’s infrastructure.

marked a sharp departure from his two immediate predecessors who had promoted the East African nation as a peaceful, business-friendly democracy.

During his first term, Mr. Magufuli’s government banned opposition rallies, revoked the licenses of nongovernmental organizations and introduced laws that critics said repressed independent reporting. He also said that pregnant girls should not be allowed in school.

On voting day, at least 10 people were killed when violence broke out in the semiautonomous archipelago of Zanzibar after citizens said they had seen soldiers delivering marked ballots.

Mr. Magufuli won that election with 84 percent of the vote amid accusations of widespread fraud and irregularities. Tundu Lissu, the main opposition candidate running against him, was accused of trying to overthrow the government and had to leave the country. He remains in exile in Belgium.

Over the past year, Mr. Magufuli came under intense criticism at home and abroad for his handling of the coronavirus pandemic. He railed against masks and social distancing, promoted unproven remedies as cures and said that God had helped the country eliminate the virus.

Tanzania has not shared data on the coronavirus with the World Health Organization since April, and it has reported just 509 cases and 21 deaths, figures that have been widely viewed with skepticism.

In February, the United States Embassy in Tanzania cautioned against “a significant increase in the number of Covid-19 cases” and warned that “limited hospital capacity throughout Tanzania could result in life-threatening delays for emergency medical care.”

Mr. Magufuli’s death came just days after speculations that he was sick with the virus. The rumors started swirling after Mr. Lissu, the opposition figure in exile, said that the president had Covid-19 and was being treated in a hospital in neighboring Kenya.

Mr. Lissu urged the authorities to disclose the whereabouts of the president, who had not been seen in public for almost two weeks. Mr. Magufuli did not attend a virtual summit for leaders of the East African regional bloc on Feb. 27.

Tanzanian officials dismissed the rumors and said that Mr. Magufuli was working as usual.

John Pombe Joseph Magufuli was born on Oct. 29, 1959, in the district of Chato in northwestern Tanzania. He earned a bachelor’s degree in education from the University of Dar es Salaam, according to the presidential office’s website. In 2009, he obtained a doctorate in chemistry from the same university, according to the website.

Before becoming president, he was a member of Tanzania’s Parliament and held a number of cabinet posts. He first developed a reputation for fighting corruption when working in cabinet positions including as the minister of lands, fisheries and public works.

Mr. Magufuli is survived by his wife, Janet, a primary schoolteacher; and two children.

Chief Covelli said Mr. Crimo planned the shooting for several weeks, but that the authorities had not yet established what his motive was. “We have no … END_OF_DOCUMENT_TOKEN_TO_BE_REPLACED

Kevin McKenzie and Martine van Hamel were standing in the dining room of their weekend house in Woodstock, N.Y., trying to figure out when they got … END_OF_DOCUMENT_TOKEN_TO_BE_REPLACED