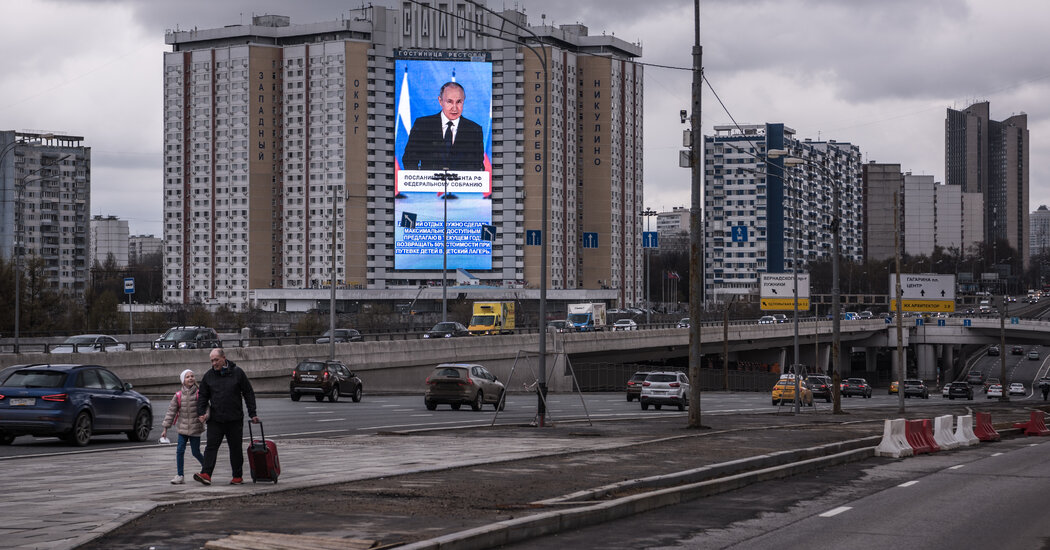 MOSCOW — He warned ominously of “red lines” in Russia’s security that, if crossed, would bring a powerful “asymmetric” response. He reminded Western leaders once again of the fearsomeness of his country’s modernized nuclear arsenal. And he boasted of Russia’s moral superiority over the West.

Yet even as President Vladimir V. Putin lashed out at foreign enemies real or perceived in a state-of-the-nation speech on Wednesday, tens of thousands of Russians defied a heavy police presence to pour into the streets to challenge his rule. In Moscow, some gathered across the street from the Kremlin to chant, “Go Away!”

It was a snapshot of Russia in the third decade of Mr. Putin’s rule: a leader facing an increasingly angry and desperate opposition but firmly in power with his country’s vast resources and huge security apparatus at his disposal.

an enormous troop buildup on Russia’s border with Ukraine and has gone toe to toe with President Biden, who issued a new round of sanctions last week, undeterred by Mr. Putin’s saber rattling in Ukraine.

Mr. Putin portrayed Russia as harried by Western nations for years with hypocritical criticism and sanctions. Punishing Russia, he said, has become a “new sport” in the West, and he was running thin on patience.

While he pledged on Wednesday that he still wanted “good relations with all participants of international society,” he said that if Russia is forced to defend its interests from any security threats its response would be “fast and tough.”

the prison treatment of the prominent opposition leader Aleksei A. Navalny seemed to be mushrooming into something more.

Thousands were arrested at those protests this winter, which came after Mr. Navalny’s return to Russia from Germany, where he had been treated for a poisoning with a chemical weapon.

Riot police officers were out in force on Wednesday. While it appeared that they sought to avoid scenes of brutality that could cast a shadow over Mr. Putin’s speech, the police did detain nearly 1,500 demonstrators nationwide.

“I didn’t come out concretely because of Aleksei Navalny, I came out more for myself,” said Svetlana Kosatkina, a 64-year-old real estate agent. “I can’t stand this whole situation of lawlessness and just total humiliation.”

a hunger strike and said by his lawyer to be near death, Mr. Navalny this week wrote in a letter to his allies that he had grown so thin he resembled a “skeleton walking, swaying in his cell.”

Mr. Putin’s speech was closely watched for hints of his intentions in Ukraine, after massing the largest military force on the border since the outset of Kyiv’s war with Russian-backed separatists seven years ago.

highest per capita in the world.

Mr. Putin’s allies had also erupted in fury when President Biden in an interview last month agreed with a characterization of Mr. Putin as a “killer.” In Wednesday’s speech, Mr. Putin lingered on a grievance that has not gained much traction outside Russian state news media: an accusation that the C.I.A. had been plotting an assassination of its own, targeting President Aleksandr G. Lukashenko, the leader of Belarus, a Russian ally.

Over the weekend, Russia’s domestic intelligence agency, the Federal Security Service, arrested two men who it said had coordinated with American and Polish intelligence agencies to plot the murder of Mr. Lukashenko. This, Mr. Putin said, “crossed all the boundaries.”

In Mr. Putin’s telling, Russia, far from pursuing a militaristic policy, has been the victim of a Western scheme to contain and hobble the country. “They attack Russia here and there without any reason,” Mr. Putin said. He cited Rudyard Kipling’s novel “Jungle Book” with a comparison of the United States to Shere Khan, a villainous tiger, nipping at Russia.

And Mr. Putin lingered on descriptions of Russia’s modernized arsenal of atomic weapons. These include a hypersonic cruise missile, called the Dagger, and a nuclear torpedo, called the Poseidon. The torpedo, Russian officials have said, is designed to set off a radioactive tsunami.

The foreign policy message was a stark warning, said Andrei A. Klimov, deputy chairman of the Committee on Foreign Affairs in the Russian Senate.

“We aren’t joking any longer,” Mr. Klimov said. ““We won’t every day tell our opponents they will be punished. But when it comes, they will understand.”

Whether you optimistically hope that mortgage rates will decline or are resigned that rates will stay elevated above the historic lows of 2021, you … END_OF_DOCUMENT_TOKEN_TO_BE_REPLACED

A resident of Nikopol, Ukraine, in her backyard last month, with smoke rising from an area on the opposite bank of the Dnipro River. Credit...David … END_OF_DOCUMENT_TOKEN_TO_BE_REPLACED