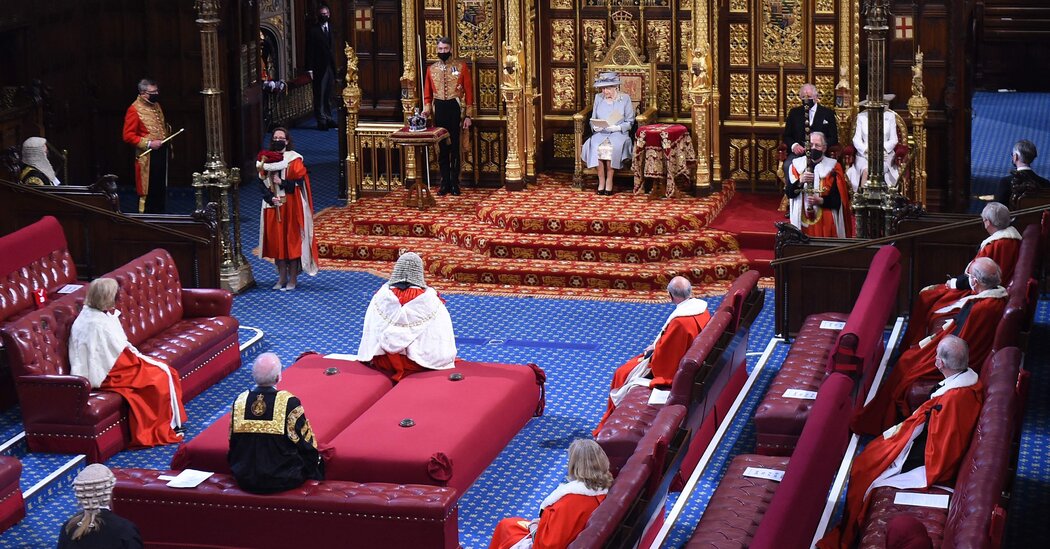 LONDON — Prime Minister Boris Johnson hoped to use the opening of Britain’s Parliament on Tuesday to galvanize his government’s agenda after striking victories in regional elections in England last week. But the spotlight, at least initially, fell on Queen Elizabeth II, who appeared in public for the first time since burying her husband, Prince Philip, last month to handle the age-old pageantry.

Squired by her son and heir, Prince Charles, the queen, 95, presided over a ceremony stripped down by coronavirus restrictions. But her voice was firm and steady as she read the Queen’s Speech, in which Mr. Johnson’s government laid out an ambitious agenda to “level up” the economically depressed north of England with the more prosperous south.

It was the queen’s 67th opening of Parliament, and a reassuring sign of continuity for Britain’s constitutional monarchy. For Mr. Johnson, it was a chance to bring a semblance of normalcy back to politics, after the turmoil of Brexit and a pandemic that paralyzed the country, leaving more than 125,000 people dead.

Mr. Johnson signaled that he intended to keep playing a dominant role in the political arena, proposing to scrap a law that restricts his ability to call general elections. With the government reaping credit for Britain’s swift rollout of vaccines and the prospect of a post-lockdown economic boom, analysts said Mr. Johnson might decide to call an election a year early, in 2023, to take better advantage of the good news.

The government also proposed that voters be required to show identification at polling places, which some opposition parties criticized as a cynical effort to suppress turnout. It was one of a host of measures that included increased funding for the National Health Service, after a year of unrelenting pressure; tighter laws on crime; changes in planning regulations to encourage more house construction; and an overhaul of the asylum system.

The government, the speech said, would “deliver a national recovery from the pandemic that makes the United Kingdom stronger, healthier and more prosperous than before.” Reading a text prepared by Downing Street, the queen spoke fluently of Mr. Johnson’s plans to roll out “5G mobile coverage and gigabit-capable broadband” throughout the country.

For decades, Prince Philip accompanied his wife to the opening of Parliament, though in recent years Charles had taken his place. Philip’s recent death lent the proceedings a more wistful, austere atmosphere than usual.

The queen shunned the 18-foot velvet cape and imperial crown that she once wore at state openings in favor of a more sensible lilac coat and hat. Charles and his wife, the Duchess of Cornwall, watched from the sidelines as Elizabeth delivered what amounted to an abbreviated State of the Union address.

Though missing hundreds of lawmakers and V.I.P. guests because of Covid restrictions, the state opening still featured plenty of pomp. The crown, which normally resides in the Tower of London, was paraded through the echoing hallways of the Palace of Westminster on a red velvet pillow, even if it did not sit on the queen’s head.

Mr. Johnson was summoned from the House of Commons by the Lady Usher of the Black Rod, who first had the door slammed in her face as a sign of its members’ independence. Mr. Johnson and the leader of the opposition, Keir Starmer, took their places before the queen, who sat on a carved wooden throne.

The two leaders said nothing to each other as they walked, in single file and wearing face masks, to the House of Lords. Last week’s elections left the Labour Party in disarray, as Mr. Johnson’s Conservative Party made further inroads into Labour’s stronghold in working-class districts in the Midlands and the north of England.

MUSCATINE, Iowa--(BUSINESS WIRE)--HNI Corporation (NYSE: HNI) announced today its Board of Directors declared a quarterly dividend of 32 cents per … END_OF_DOCUMENT_TOKEN_TO_BE_REPLACED

Tokyo (CNN) — The Japan Tourism Agency announced on Tuesday, May 17 that it would start allowing small group tours in May as part of a "test tourism" … END_OF_DOCUMENT_TOKEN_TO_BE_REPLACED

If you’re superstitious, today is your day.That's because it's Friday the 13th (the only one of the year, in fact). It's a day when bad juju reigns … END_OF_DOCUMENT_TOKEN_TO_BE_REPLACED