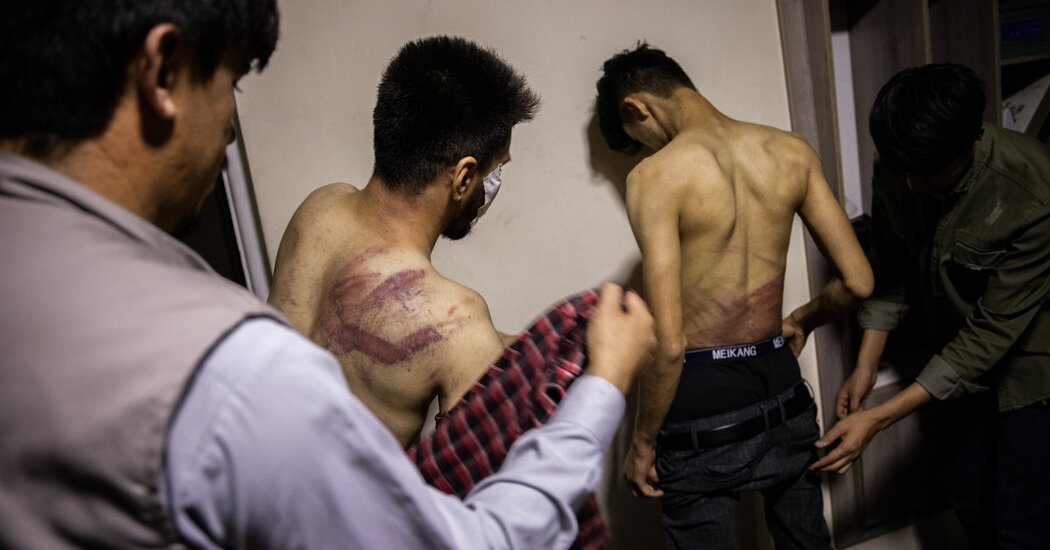 Beloved shows removed from the airwaves. A television station cutting from a news report a story about a pregnant police officer who was reportedly fatally shot by the Taliban. A radio editor telling his colleagues to edit out anti-Taliban cheers from coverage of demonstrations in the capital.

Afghanistan’s vibrant free press and media industry, once celebrated as a success story and labeled one of the country’s most important achievements of the past two decades, has abruptly been transformed after the Taliban takeover of the country. Now, its survival is threatened by physical assaults, self-censorship and a dwindling journalist population less than a month after the Taliban seized control of Kabul, the capital, and began enforcing their hard-line Islamist policies.

The Taliban’s crackdown on the free press was even more evident on Wednesday after two Afghan journalists were detained and violently assaulted for covering a protest in Kabul. Photos showed the backsides of both reporters covered with bruises and gashes from being whipped repeatedly with cables, sparking an international outcry.

“The situation of free media is very critical,” said Neda, an anchor for a local television station in Kabul, identified by her nickname to protect her identity. “No one dares to ask the Taliban about their past wrongdoings and the atrocities they have committed.”

the Taliban rounded up scores of demonstrators around Kabul and journalists covering the protests, subjecting them to abuse in overcrowded jails, according to journalists who were present. The crackdown on the demonstrations and the ensuing coverage followed a Taliban announcement Tuesday that protests would not be allowed without government approval. At least 19 journalists were detained on Tuesday and Wednesday, the United Nations said.

“You’re lucky you have not been beheaded,” Taliban guards told one detained journalist as they kicked him in the head, Ravina Shamdasdani, a spokeswoman for the United Nations human rights office in Geneva, told reporters.

Reporters with Etilaat e Roz described being detained at the protests, then brought to a nearby police station where they were tied up and beaten with cables.

Taqi Daryabi, one of the reporters, said about a half-dozen Taliban members handcuffed him behind his back when he was on the ground on his stomach, then began kicking and hitting him until he lost consciousness.

“They beat so much that I couldn’t resist or move,” he said. “They forced me to the ground on my stomach, flogging me on my buttocks and back, and the ones who were in the front were kicking me in the face.”

Reporters working for Tolo News, Ariana News, Pajhwok News Agency and several freelance journalists have also been detained and beaten by the Taliban in the past three weeks, according to local media reports.

“The Taliban is quickly proving that earlier promises to allow Afghanistan’s independent media to continue operating freely and safely are worthless,” Steven Butler, Asia program coordinator for the Committee to Protect Journalists, said in a statement Wednesday. “We urge the Taliban to live up to those earlier promises, to stop beating and detaining reporters doing their job.”

On top of the dangerous environment, the flow of information from the government has slowed and become very limited. There used to be dozens of government spokesmen; now there are only a handful speaking for the new Taliban government, and they are less responsive than during the group’s insurgency.

In the late 1990s, the Taliban imposed strict restrictions on the media, banning television and using the state-owned radio and newspapers as propaganda platforms. But the group promised greater openness toward freedom of expression once it seized power last month.

“We will respect freedom of the press, because media reporting will be useful to society and will be able to help correct the leaders’ errors,” Zabihullah Mujahid, the acting deputy information and culture minister, told Reporters Without Borders last week. “We declare to the world that we recognize the importance of the role of the media.”

Many Afghan journalists said those promises are just “words” by Taliban’s leaders, citing recent assaults on reporters in Kabul and elsewhere.

“Press freedom is dead in Afghanistan,” said Mr. Quraishi, the media advocate. “And the society without a free press dies.”

GREENVILLE, N.C.--(BUSINESS WIRE)--Employers aiming to win the war on talent have a new “A” team to tap into: college and professional athletes. … END_OF_DOCUMENT_TOKEN_TO_BE_REPLACED

Mortgage rates are likely to rise in July, extending a seven-month streak. High inflation, and the Federal Reserve's efforts to control it, have … END_OF_DOCUMENT_TOKEN_TO_BE_REPLACED