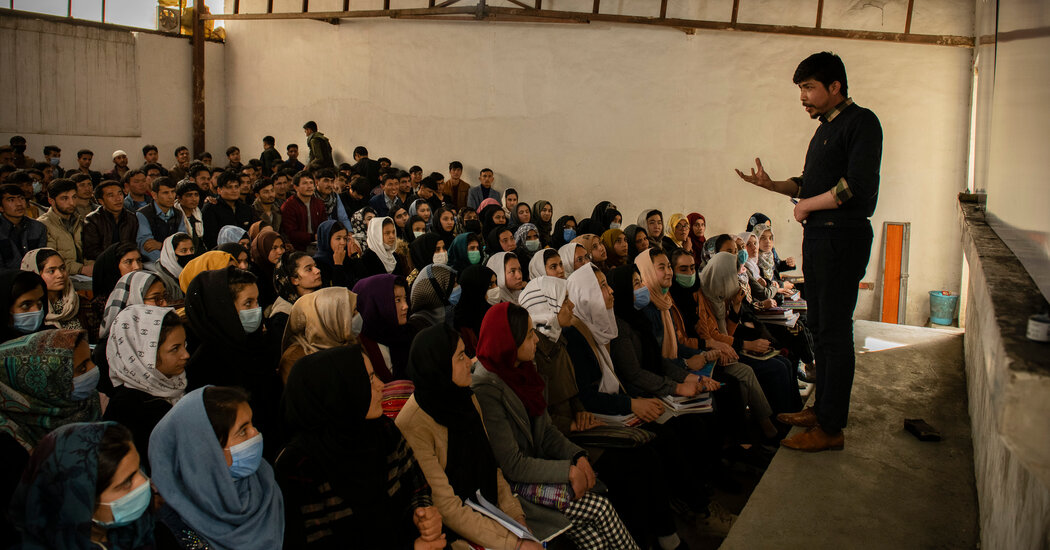 KABUL, Afghanistan — Two and a half years ago, a suicide bomber detonated an explosive vest during an algebra class at the Mawoud Academy tutoring center. At least 40 students, most from Afghanistan’s Hazara ethnic minority, died as they studied for college entrance exams.

Najibullah Yousefi, a teacher who survived the August 2018 blast, moved with his students to a new location. He has a plan for the next suicide bomber.

“I’m in front of the class and will get killed anyway,” Mr. Yousefi, 38, said. “So to protect my students, I will go and hug the attacker” to absorb the blast.

Perhaps no other minority group faces a more harrowing future if the Taliban return to power as a result of negotiations with the Afghan government — especially if they don’t honor a pledge under a February 2020 agreement with the United States to cut ties with terror organizations such as the Islamic State.

mosques, hospitals, voting sites and even a wrestling club. More than 80 people perished in a double suicide bombing at a Hazara protest in Kabul in 2016. At least 31 died in a suicide bombing in a Hazara area during a 2018 celebration for Nowruz, the Persian New Year. Most of these attacks have been claimed by Sunni Muslim extremists of the Islamic State, who consider Shiites apostates and heretics.

What progress has been made by the ethnic minority is threatened by such attacks, and now a possible return of the Taliban to government. As recently as 2018, Hazara civilians were killed and forced from their homes during a Taliban offensive in Hazarajat.

Taliban negotiators have said the rights of minorities, including Hazaras, would be protected under Islamic law. In some Hazara areas, local militias have formed to protect communities from attacks.

Marzia Mohseni, 18, a Hazara student, said she feared losing her rights to education and to the workplace if the Taliban returned to power. She said she wants to be a lawyer “and provide equal rights to all people in this country.”

But a Taliban return could mean that “all my gains and all my hard work would be wasted,” she said.

suicide bombing at the Kawsar e Danish tutoring academy in Kabul. At least 44 students and teachers died in the attack.

Ms. Mohseni said she had experienced insomnia and extreme anxiety after the bombing, yet she is back at her studies at the same academy. Her fear is a burden she carries into class each morning with her pens and books.

“Every minute in the class, I think about a suicide attack, an explosion,” she said. “But I will try my best, for the blood of all those killed and wounded and for the sake of their dreams and my own dreams.”

Ms. Mohseni said her father works in a restaurant and her brother, as a barber, to pay her tuition and board. She pleaded with them to allow her to return after the academy was bombed.

highest score among 200,000 students who took the entrance exam in September. The daughter of a coal miner, Ms. Alizada said her father broke down in tears when he heard the news.

The Kawsar e Danish academy and other Hazara centers have hardened their security. Students pass through several checkpoints manned by armed guards. They undergo body searches. No backpacks are allowed.

targeted assassinations. Government workers, journalists, human rights activists, judges, religious scholars, students — all have been killed by gunmen or by small bombs attached to their vehicles.

On March 14, five civilians were killed and 13 wounded in simultaneous attacks when two cars with magnetic bombs attached exploded in two Hazara neighborhoods in Kabul, police said. One car exploded near the Mawoud Academy but caused no damage.

Ahmad Rahimi, 26, a teacher at the Kawsar e Danish academy, said the unrelenting violence can be debilitating. “I see the fear on the faces of my students,” he said.

Mr. Rahimi said he and his students survived a failed suicide attack inside an academy classroom in 2017, when a potential bomber’s suicide vest failed to detonate. Several students dropped out afterward, he said.

“Because of these threats, they have given up on their dreams,” Mr. Rahimi said.

Khaliqyar Mohammadi, 20, a Hazara student at a tutoring center, said he felt enormous pressure to pass the exam. He is the oldest son and the first in his family to attend a tutoring center.

He said his father was serving an eight-year prison term for carrying a Taliban-issued document required to commute to and from work in Taliban-controlled areas, a crime under an Afghan law that prohibits acknowledging the Taliban’s shadow governments.

Forced to raise his own tuition money, Mr. Mohammadi took a break from school and worked on construction sites for two years.

“The whole family is expecting me to study and change the fate of my family,” he said. “I’ll either be killed, or I’ll reach my goal.”

In part because of security fears, the number of students at the Mawoud Academy dropped by nearly half this year — to 2,000 from about 4,000 last year, said Mr. Yousefi, the teacher. But for those who have overcome their fears, studying to pass the exam has become “a matter of honor,” he said.

Sometimes, his mathematics class is transformed into a motivational lesson, Mr. Yousefi said. His students sometimes must be reminded of what they have overcome, and the high stakes involved.

“We remind them of their poverty, the risk they take to attend this class,” he said. “We tell them these classes belong to those who want to get something out of their life — and their fate.”

Kohl's announced Friday that it is terminating talks to sell its business, saying that retail environment has significantly deteriorated since the … END_OF_DOCUMENT_TOKEN_TO_BE_REPLACED