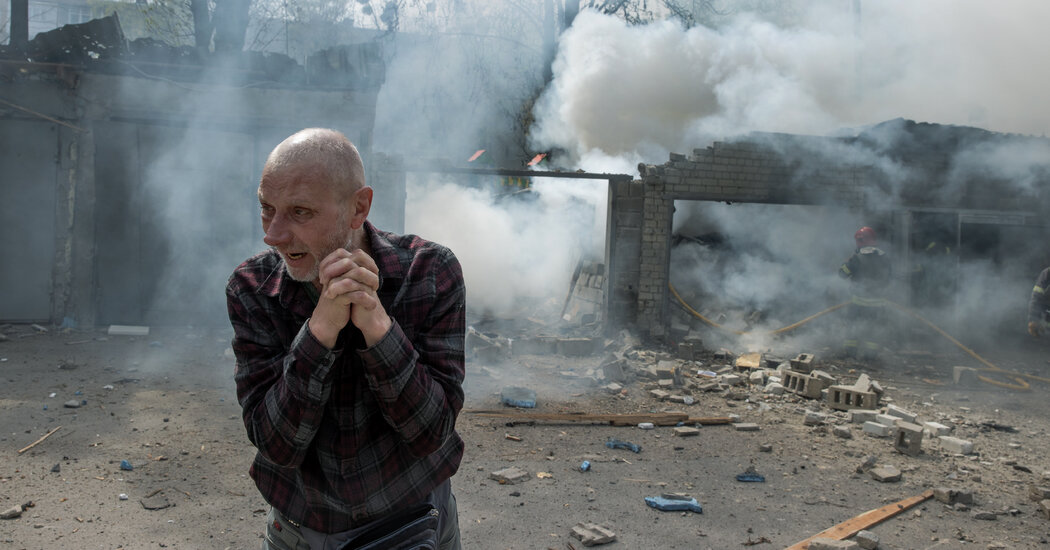 KHARKIV, Ukraine — Russia plunged into a new chapter of the Ukraine war on Tuesday, intent on capturing the eastern part of the country and crushing Ukrainian defenses without the same blunders that badly damaged Russian forces in the conflict’s initial weeks.

“Another phase of this operation is starting now,” Foreign Minister Sergey V. Lavrov of Russia said, as the Russian Defense Ministry announced that its missile and artillery forces had struck hundreds of Ukrainian military targets overnight.

The Donbas has now become the stated territorial objective of Russia’s redeployed invasion force along a front that stretches roughly 300 miles, from an area near the northern city of Kharkiv to the besieged southern port of Mariupol, where die-hard Ukrainian defenders ensconced in a sprawling steel plant have repeatedly defied Russian demands to surrender.

Western military experts said the offensive promised to be much more methodical than the blitz-like operation the Kremlin launched Feb. 24 to subjugate Ukraine, which was marked by rapid and ultimately unsuccessful advances of tanks and helicopter assaults deep inside the former Soviet republic.

left thousands of civilians dead or wounded, caused Europe’s worst refugee crisis since World War II, deeply isolated Russia economically because of Western sanctions and turned President Vladimir V. Putin of Russia into a pariah who has been described as a war criminal in the United States and Europe.

While there have not yet been any large offensives in the Donbas region, the Ukrainian Ministry of Defense said in a statement Tuesday that Russian forces were laying the groundwork for a future push: more surface-to-air missile systems have been shuttled to the front to protect important positions and more artillery positions have appeared.

were trapped at a large steel factory in Mariupol along with Ukrainian forces that are waging what appears to be the last defense of the city. Russia is seeking to take the city as part of a strategically important “land bridge” to occupied Crimea.

Possible banned weapons. Based on evidence reviewed by The Times, it is likely that Ukrainian troops used cluster munitions in an eastern village that they were attempting to retake from Russian forces. The weapons are banned by many countries for the harm they can cause to civilians.

Russia’s economy. While President Vladimir V. Putin boasted that the Russian economy is holding up under Western sanctions, his central bank chief warned that the consequences were only beginning to be felt, and Moscow’s mayor said that 200,000 jobs are at risk in the capital alone.

The Donbas battle, on wide-open terrain, will look significantly different from the urban warfare around Kyiv, where the Russian military tried and failed to advance.

This does not mean that Ukraine no longer needs the anti-tank and air-defense systems that have been so effective so far, military analysts said. In addition, the Ukrainians will need powerful arms to enable a counteroffensive of their own.

“This phase of the conflict will be distinct from phase one, with a greater focus on offensives against dug-in combatants as opposed to Ukrainian defense against a large attacking force,” Colonels Wetzel and Barranco wrote. “The campaign is likely to become a bloody war of attrition with limited territorial gains on either side.”

Capturing the besieged city of Mariupol is a key part of the Russian campaign. The fall of the city, which has come to symbolize the death and devastation wrought by the invasion, would allow Russia to complete a land bridge between Russian-held territory and the Crimean peninsula.

A sprawling Soviet-era steel factory in Mariupol, which its designers have said was built to withstand a nuclear attack, has been sheltering thousands of soldiers and civilians and is the last Ukrainian redoubt there.

Russian commanders said Tuesday they were beginning their final assault on the factory, the Azovstal steel plant, after the defenders had rejected ultimatums to surrender. A Ukrainian officer in Mariupol, Maj. Sergiy Volyna, wrote on a Telegram channel that “we are ready to fight to the last drop of blood.”

Lil Wayne has just listed his modern megamansion in Miami Beach for an equally mega sum of $29.5 million.The rapper (whose legal name is Dwayne … END_OF_DOCUMENT_TOKEN_TO_BE_REPLACED