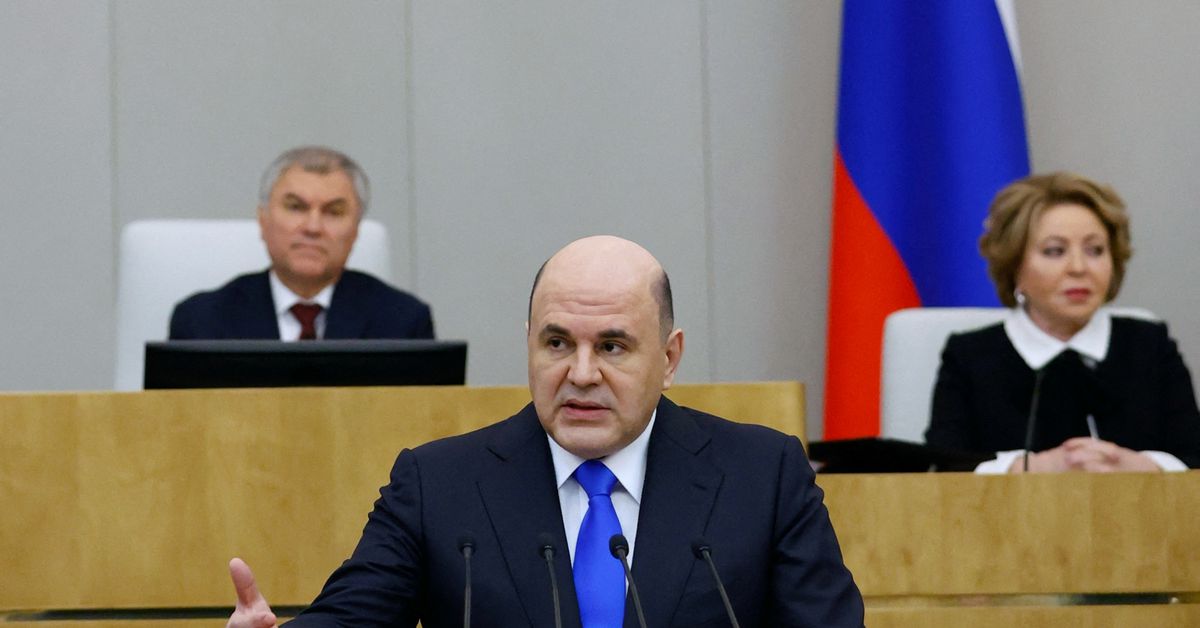 Russia’s Prime Minister Mikhail Mishustin delivers a speech during a session of the State Duma, the lower house of parliament, in Moscow, Russia April 7, 2022. Sputnik/Dmitry Astakhov/Pool via REUTERS

April 7 (Reuters) – Russia is facing its most difficult situation in three decades due to unprecedented Western sanctions, but foreign attempts to isolate it from the global economy will fail, Prime Minister Mikhail Mishustin said on Thursday.

Western countries are progressively broadening an array of economic sanctions imposed to try to force Russia to end its military operation in Ukraine and withdraw its forces.

Russia calls its actions in Ukraine a “special operation” that it says is not designed to occupy territory but to destroy its southern neighbour’s military capabilities and capture what it regards as dangerous nationalists.

“No doubt, the current situation could be called the most difficult in three decades for Russia,” Mishustin told the Duma, or lower house of parliament. “Such sanctions were not used even in the darkest times of the Cold War.”

Western sanctions have already cut Russia off from the global financial network and left a number of its top banks with no access to the international SWIFT banking messaging system, while some traders have started to refuse Russian oil cargoes, intensifying pressure on Moscow’s finances.

Before the recent sanctions, Russia planned to run a budget surplus of 1.3 trillion roubles ($17 billion) this year, equal to 1% of gross domestic product. On Thursday, Mishustin said Russia would spend all it will earn this year on state aid.

The government has so far pledged over 1 trillion roubles in anti-crisis support to businesses, on social payments and to families with children, of which 250 billion roubles are to be spent on state aid for the Russian Railways.

Russia has introduced capital controls in retaliation for the sanctions, making it nearly impossible for foreign investors to sell their assets, both industrial and financial, if they decide to pull out of the country.

“If you have to leave, production should continue working as it provides jobs. Our citizens work there,” Mishustin said.

The Kremlin has suggested that it may nationalise assets held by Western investors who decide to depart.

As some of the companies leaving are transferring their holdings to Russian companies, Mishustin said, the situation offered scope for new business opportunities. read more

“Our financial system, the lifeblood of the entire economy, has held up,” Mishustin said. “The stock market and the rouble are stabilising. I doubt that any other country would have withstood this. We did.”

The European Commission proposed on Tuesday new sanctions against Russia over its invasion of Ukraine, including a ban on buying Russian coal and on Russian ships entering EU ports, and said it was working on banning oil imports too. read more

MUSCATINE, Iowa--(BUSINESS WIRE)--HNI Corporation (NYSE: HNI) announced today its Board of Directors declared a quarterly dividend of 32 cents per … END_OF_DOCUMENT_TOKEN_TO_BE_REPLACED

If you’re superstitious, today is your day.That's because it's Friday the 13th (the only one of the year, in fact). It's a day when bad juju reigns … END_OF_DOCUMENT_TOKEN_TO_BE_REPLACED

CHARLOTTE, NORTH CAROLINA - OCTOBER 20: Chris Duarte #3 of the Indiana Pacers defends Gordon Hayward ... [+] #20 of the Charlotte Hornets during their … END_OF_DOCUMENT_TOKEN_TO_BE_REPLACED