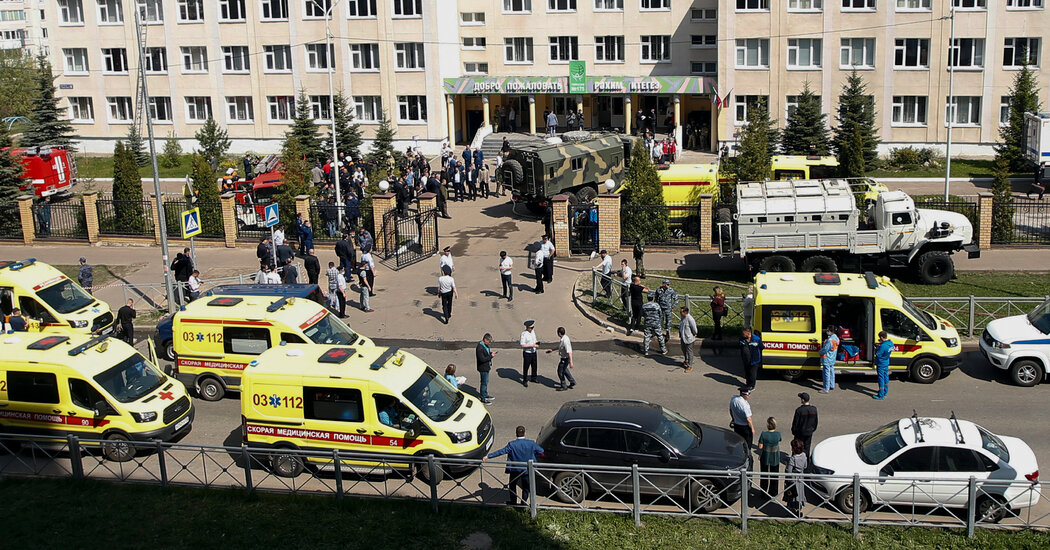 MOSCOW — Gunfire and a subsequent explosion erupted at a school in central Russia on Tuesday, killing several students and at least one teacher, the state news media reported, in what appears to be a rare mass shooting in the country.

Nearby residents heard shots and an explosion, then saw smoke billowing from the schoolhouse as the police and ambulances rushed to the scene in Kazan, a regional capital about 450 miles east of Moscow, the Russian Information Agency reported.

The Russian Information Agency cited local emergency officials as saying that 11 people had died and that the police had detained a 17-year-old suspect. But it also cited a regional governor, Rustam Minnikhanov, as saying that seven students and one teacher had died and that 20 people had been wounded. The news agency said it could not immediately clarify the discrepancy.

Russia has strict laws governing civilian gun ownership. Applicants for a firearm’s license must pass psychological exams and own a smoothbore shotgun for a trial period before obtaining a rifle. Pistol ownership is more tightly controlled, largely limited to those, such as retiring military officers, who are given a pistol as an award for their service.

Initial reports on the shooting on Tuesday did not say what type of weapon was used or how the gunman had obtained it.

The Seattle Seahawks are very much still in the running for Baker Mayfield. (Photo by Stacy ... [+] Revere/Getty Images) Getty Images The Seattle … END_OF_DOCUMENT_TOKEN_TO_BE_REPLACED

(CNN) — Kim Kyung-seop recalls going to cheap bars after class with his friends, where they binged on as much makgeolli as possible. "You know the … END_OF_DOCUMENT_TOKEN_TO_BE_REPLACED