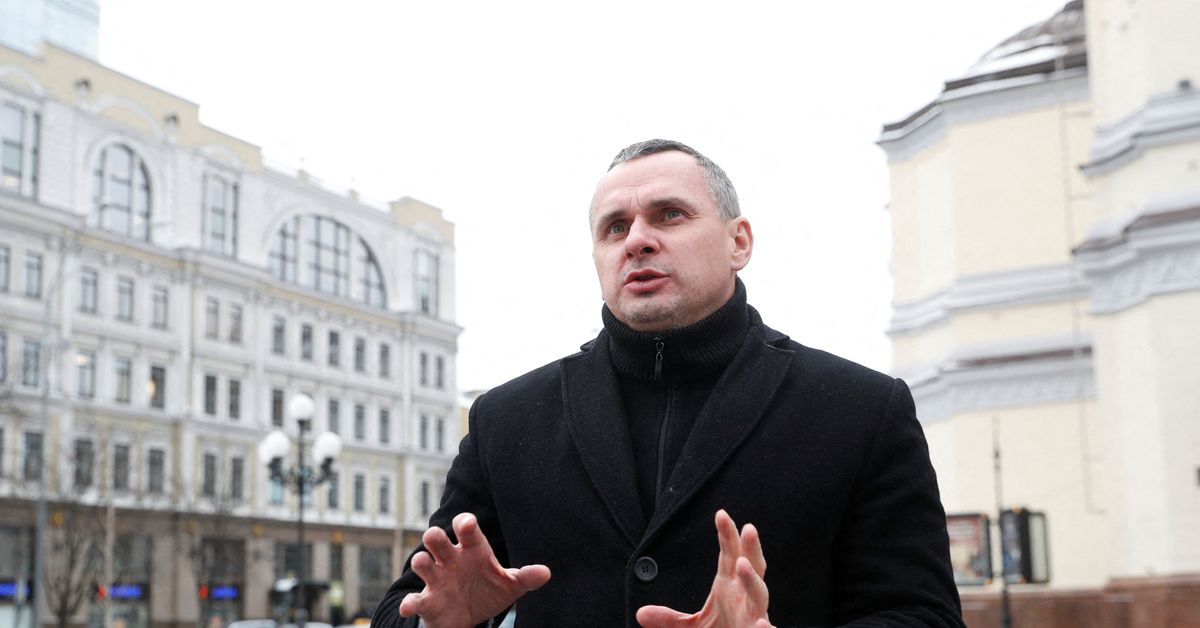 Russia arrested Oleg Sentsov in Crimea, his native Black Sea peninsula, and sentenced him to 20 years in a maximum security prison over terrorist charges he says amounted to a political vendetta.

The West demanded his release and Sentsov returned to Ukraine after a 2019 prisoner swap, one of few such exchanges in years of stand-off between the former Soviet republic and its ex-overlord Moscow.

“Sowing chaos and destabilisation is Putin’s main strategy. He wants to make Ukraine a fallen state,” Sentsov told Reuters in the Ukrainian capital Kyiv. “If Ukraine falls, all this will simply move further to the west.”

Russia has now alarmed the West with a military buildup of more than 100,000 troops near Ukraine’s borders while presenting an array of security demands including that Kyiv never join NATO, the Western military alliance. read more

“This is one and the same war: Crimea, Donbas, the new escalation, the hybrid war that Russia is waging. Not only against Ukraine but more broadly against its neighbours – Poland, the Baltic states, Moldova, Georgia, Kazakhstan.”

Despite international tensions flying high, there is little sign of panic in Ukraine’s capital Kyiv.

“People are used to it. They stopped fearing. It’s not that they are indifferent. But they are calm. Preparing for what’s to come,” said Sentsov, adding he would go fight if Russia invaded.

He praised increased U.S. and British arms deliveries to Ukraine and condemned Germany’s refusal to do the same, or to scrap the Nord Stream 2 gas pipeline that would take gas straight from Russia to Germany, bypassing Ukraine.

“Putin’s ambition is to be a global leader who stands at the helm of big parts of eastern Europe and Asia,” said the 45-year-old. “Blandishing him, throwing money at him helps him carry on.”

Sentsov, who served four years in prison in the Russian Arctic, also called for the release of other Ukrainians held in Russia. Kyiv says they number more than 120 people.

Sentsov released his latest film last year. “Rhino” is set in the 1990s shortly after the break-up of the Soviet Union, a period known for the rise of crime, lawlessness and oligarchs.

He is now working on a heart-warming story set in a small American town – a script he wrote while in jail where he said harsh conditions meant he was looking for “brightness”.

But it is too soon, he said, for a film looking at Ukraine’s most recent past, from the 2013-14 “Maidan” uprising that toppled a Russian-backed president, the annexation of Crimea and the conflict in Donbas.

“The war continues. What Maidan stood for and what people died for, we have not yet achieved. We may now have a new Russian invasion. It’s all on fire still,” said Sentsov.

Daniel Acker | Bloomberg | Getty ImagesHome prices are softening in most markets across the nation.Yet home prices are still higher compared with a … END_OF_DOCUMENT_TOKEN_TO_BE_REPLACED

Joel Silver has been responsible for some of Hollywood's biggest franchises, including "The Matrix," "Die Hard," "Predator," and "Lethal Weapon."So … END_OF_DOCUMENT_TOKEN_TO_BE_REPLACED