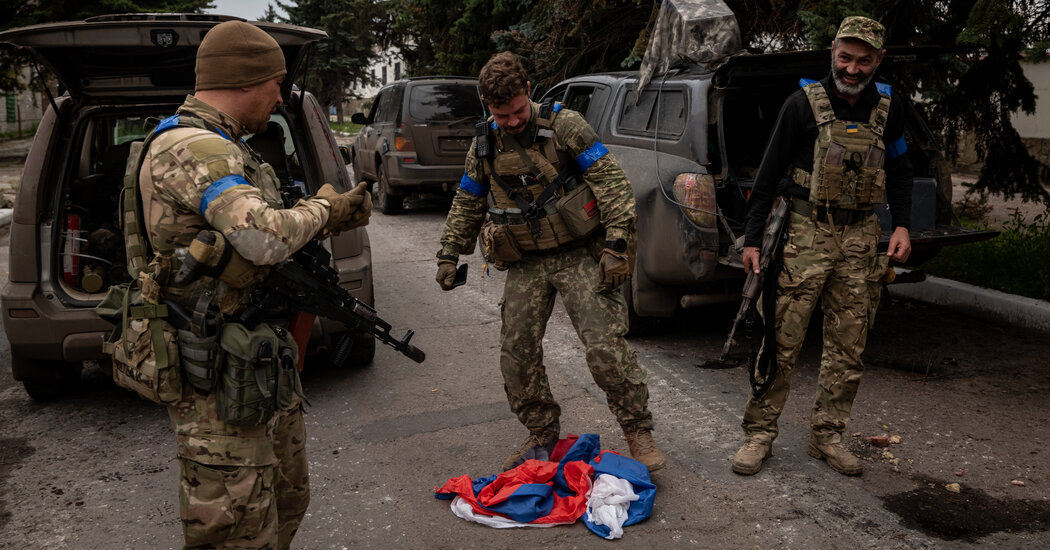 LYMAN, Ukraine — In front of the mayor’s office in Lyman lay a heap of Russian propaganda posters, apparently freshly torn down and partially burned in a fire that went out in a thin fall drizzle on Sunday.

A day after Ukrainian forces retook control of Lyman, a strategic railway hub in eastern Ukraine’s Donetsk region, a picture began to emerge of the destruction left behind by fleeing Russian soldiers who had occupied the city for months. In a hasty withdrawal, they abandoned official documents, military vehicles and the bodies of their comrades.

After weeks of fierce fighting, Russian forces retreated from Lyman on Saturday, just one day after President Vladimir V. Putin illegally declared the surrounding region to be part of Russia citing what Ukraine and its Western allies have called sham referendums in territories partly under Russian control.

The intense battle for the city was evident on Sunday afternoon. Whole city blocks were panoramic scenes of collapsed brick and corrugated tin roofing. A local bakery, Seagul, was reduced to a heap of rubble. Its bread trucks were still parked in a lot waiting for morning distributions that wouldn’t come.

“Look at the destroyed houses,” said Roman Plakhaniv, a lieutenant in the Kramatorsk district police force, who arrived on Sunday to patrol the city. “This was a nice, normal town. People from another country came and destroyed it.”

Signs of Russia’s plans to put down roots were abundant. Inside city hall were notices explaining how to apply for building permits under the occupation authority and with phone numbers to call to apply for a Russian pension. A stamped and signed document left on a table announced “the creation of the committee for reviewing controversial questions in distributing social assistance.” It was formed on Sept. 9.

Copies of a newspaper called Donetsk Republic were scattered about on the floor. An edition dated Sept. 15 ran an article under the headline, “Defense of the Republic and Borders of Russia” — apparently intended to tamp down worry as Ukraine’s counteroffensive gained ground.

“The President of Russia Vladimir V. Putin announced that in the course of the special operation Russia is not losing military strength and will defend its sovereignty,” the article explained.

In one office was a poster emblazoned with a Z, a symbol of Russia’s invasion, that said, “We don’t abandon our own.”

The only accessible road into Lyman is muddy and rutted, crossing a pontoon bridge over the roiling water of the Oskil River, which the Russian military had briefly tried to maintain as a defensive barrier last month, before falling back farther.

Dense pine forest surrounding the town had slowed and frustrated both sides in the fighting, and now show signs of the ferocity of the artillery battles in severed branches scattered along the road. Whole villages along the route are in ruins.

At one point, the road into town passed the remnants of what appeared to be a Ukrainian attack on Russian soldiers trying to flee the city in a civilian van. The vehicle’s doors were open and sleeping bags, pads, military coats, rations, shoes and other supplies had spilled out.

Nearby, on the side of the road, were anti-tank mines and the bodies of half a dozen Russian soldiers. A line of Ukrainian military trucks rumbled by, as a demining team checked the bodies for boobytraps, using ropes to tug and jostle them from a distance in case they exploded.

Asked how the Russians had died, one of the soldiers on the demining team shrugged. “They came to a foreign land,” he said.

AUSTIN, Texas--(BUSINESS WIRE)--As the first multifamily management company to be recognized in the Public Relations and Marketing Excellence Awards, … END_OF_DOCUMENT_TOKEN_TO_BE_REPLACED

There have been whispers of cooling housing and rental prices in the San Francisco Bay Area, but that hasn't yet translated into practical, noticeable … END_OF_DOCUMENT_TOKEN_TO_BE_REPLACED

Cars pass in Independence Square at twilight in Kyiv, Ukraine, Monday, Oct. 31, 2022. Rolling ... [+] blackouts are increasing across Ukraine as the … END_OF_DOCUMENT_TOKEN_TO_BE_REPLACED