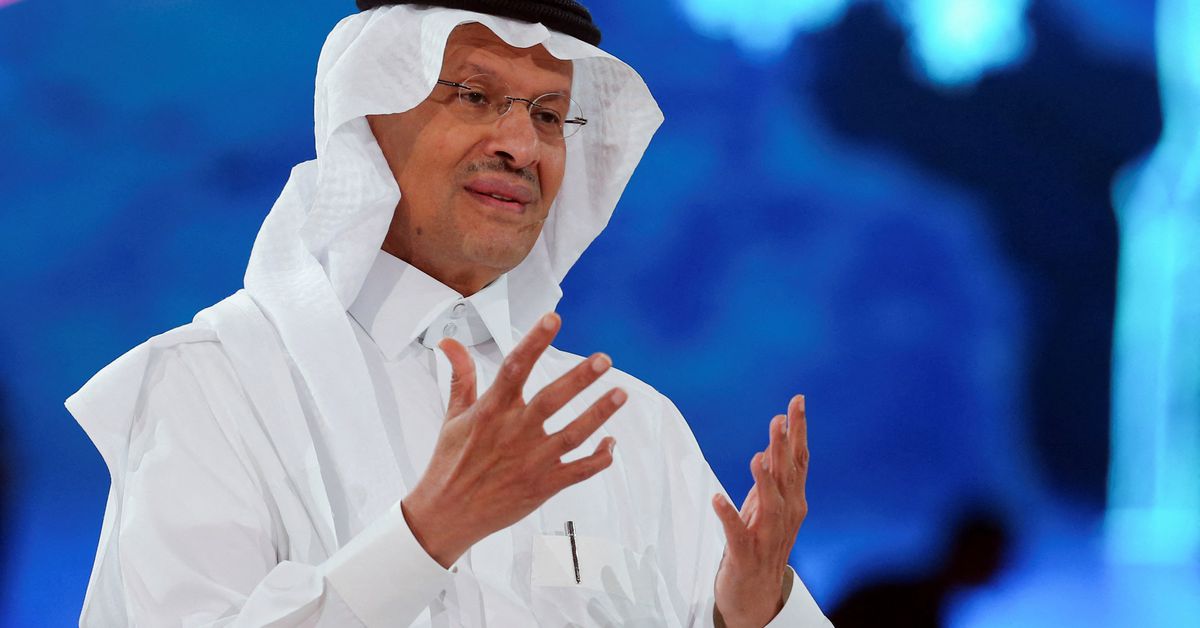 RIYADH, Oct 25 (Reuters) – Saudi Arabia decided to be the “maturer guys” in a spat with the United States over oil supplies, the kingdom’s energy minister Prince Abdulaziz bin Salman said on Tuesday.

The decision by the OPEC+ oil producer group led by Saudi Arabia this month to cut oil output targets unleashed a war of words between the White House and Riyadh ahead of the kingdom’s Future Investment Initiative (FII) forum, which drew top U.S. business executives.

The two traditional allies’ relationship had already been strained by the Joe Biden administration’s stance on the 2018 murder of Saudi journalist Jamal Khashoggi and the Yemen war, as well as Riyadh’s growing ties with China and Russia.

When asked at the FII forum how the energy relationship with the United States could be put back on track after the cuts and with the Dec. 5 deadline for the expected price-cap on Russian oil, the Saudi energy minister said: “I think we as Saudi Arabia decided to be the maturer guys and let the dice fall”.

“We keep hearing you ‘are with us or against us’, is there any room for ‘we are with the people of Saudi Arabia’?”

Saudi Investment Minister Khalid al-Falih said earlier that Riyadh and Washington will get over their “unwarranted” spat, highlighting long-standing corporate and institutional ties.

“If you look at the relationship with the people side, the corporate side, the education system, you look at our institutions working together we are very close and we will get over this recent spat that I think was unwarranted,” he said.

While noting that Saudi Arabia and the United States were “solid allies” in the long term, he highlighted the kingdom was “very strong” with Asian partners including China, which is the biggest importer of Saudi hydrocarbons.

The OPEC+ cut has raised concerns in Washington about the possibility of higher gasoline prices ahead of the November U.S. midterm elections, with the Democrats trying to retain their control of the House of Representatives and the Senate.

Biden pledged that “there will be consequences” for U.S. relations with Saudi Arabia after the OPEC+ move.

Princess Reema bint Bandar Al Saud, the kingdom’s ambassador to Washington, said in a CNN interview that Saudi Arabia was not siding with Russia and engages with “everybody across the board”.

She added that “a lot of people talk about reforming or reviewing the relationship” and said that was “a positive thing” as Saudi Arabia “is not the kingdom it was five years ago.”

Like previous years, the FII three-day forum that opened on Tuesday saw a big turnout from Wall Street, as well as other industries with strategic interests in Saudi Arabia, the world’s top oil exporter.

“I can’t imagine any allies agreeing on everything and not having problems – they’ll work it through,” Dimon said. “I’m comfortable that folks on both sides are working through and that these countries will remain allies going forward, and hopefully help the world develop and grow properly.”

The FII is a showcase for the Saudi crown prince’s Vision 2030 development plan to wean the economy off oil by creating new industries that also generate jobs for millions of Saudis, and to lure foreign capital and talent.

No Biden administration officials were visible at the forum on Tuesday. Jared Kushner, a former senior aide to then-President Donald Trump who enjoyed good ties with Prince Mohammed, was featured as a front-row speaker.

The Saudi government invested $2 billion with a firm incorporated by Kushner after Trump left office.

After its inaugural launch in 2017, the forum was marred by a Western boycott over Khashoggi’s killing by Saudi agents. It recovered the next year, attracting leaders and businesses with strategic interests in Saudi Arabia, after which the pandemic hit the world.

AUSTIN, Texas--(BUSINESS WIRE)--As the first multifamily management company to be recognized in the Public Relations and Marketing Excellence Awards, … END_OF_DOCUMENT_TOKEN_TO_BE_REPLACED

There have been whispers of cooling housing and rental prices in the San Francisco Bay Area, but that hasn't yet translated into practical, noticeable … END_OF_DOCUMENT_TOKEN_TO_BE_REPLACED

Cars pass in Independence Square at twilight in Kyiv, Ukraine, Monday, Oct. 31, 2022. Rolling ... [+] blackouts are increasing across Ukraine as the … END_OF_DOCUMENT_TOKEN_TO_BE_REPLACED