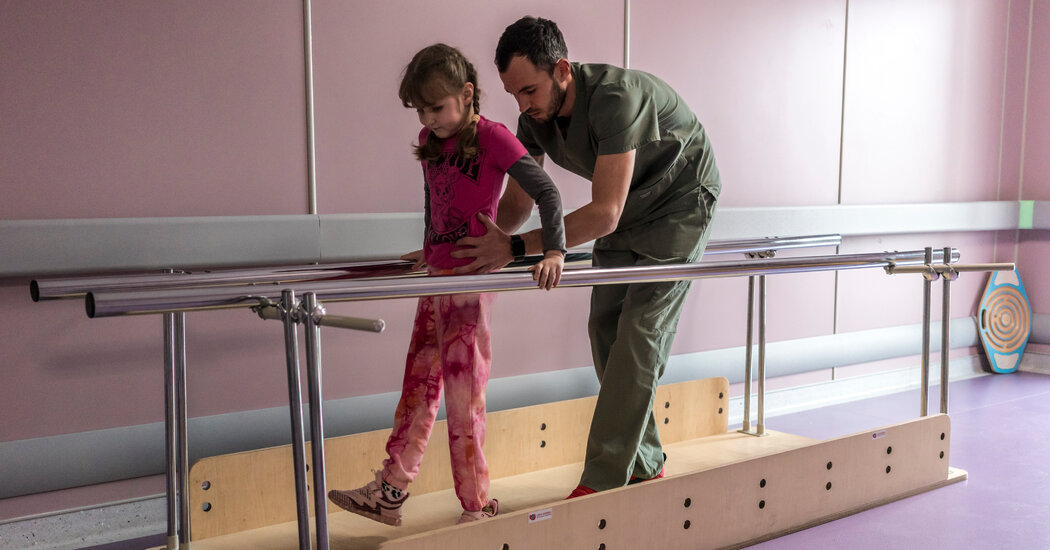 KYIV, Ukraine — Using his small blue crutches, Daniil Avdieienko, 7, gestured toward two deep brown stains on the cement floor of the entryway to his apartment building.

The patch on the right, just inside the door, was his blood, he explained. Then he pointed at the other blood stain: “This is from my mother.’‘

Daniil and his parents were running to a basement shelter in central Chernihiv, a northern city where fighting raged in the early days of the war, when shrapnel struck him in the back. Eventually, he had to have 60 centimeters, or nearly two feet, of his intestines removed. Seven months later he is still recovering from his wounds, and will likely need several more surgeries, as will his parents, both of whom suffered serious leg injuries.

But while his physical injuries are on the mend, he is still grappling with the psychological trauma of the attack.

“Superhero School” to keep their education going and take part in weekly activities, like concerts and painting classes, intended to lift their spirits.

Many of the youngsters suffer from severe anxiety or PTSD, she said.

“If it’s a war trauma, it is very difficult to provide the sense of safety for that child,” she said. “Because the child understands that the war is not over.”

Despite their ordeal, many children push ahead with resolve, and even alacrity. Maryna Ponomariova, who is 6, has been working closely with psychologists, physical therapists and teachers since she came to Ohmadyt hospital this summer, weeks after a devastating May 2 attack on her home in the southern Kherson region.

when a missile plunged into the crowd standing outside.

Yuliia and her aunt were inside the station. A stranger shielded Kateryna with his body, likely saving her life even as he lost his own. The family found their mother’s body in the city morgue the next day.

Maryna Lialko had raised the girls alone after their father left the family, their grandmother, Nina Lialko, said.

“She was devoted to these two girls,” she said.

Kateryna was discharged this fall from Ohmadyt hospital, where she received psychiatric and physical therapy, and the girls are now in Kyiv living with their grandmother and aunt.

The aunt, Olha Lialko, said she has seen a shift in their personalities. Kateryna is increasingly turning inward; she speaks very little and struggles to maintain eye contact. Yuliia still can’t fully comprehend the loss.

“Katya is very closed; she keeps it all to herself,” Olha Lialko said. “Yuliia is missing mom a lot. She needs attention, she likes to cuddle.”

The family is trying to help the girls process their loss. And occasionally they see glimpses of the girls they knew before the war.

They dye their hair wild colors and play with makeup. They fight as only sisters can, and cling closely to each other for company.

But no one knows what will come next for them. Their life is on hold. They attend school online and have few friends in the new city. The family is unable to return home to Donetsk but unwilling to commit to staying in Kyiv.

“It will be very difficult for them to live without her,” their grandmother said. “This life has no sense at all.”

AUSTIN, Texas--(BUSINESS WIRE)--As the first multifamily management company to be recognized in the Public Relations and Marketing Excellence Awards, … END_OF_DOCUMENT_TOKEN_TO_BE_REPLACED

There have been whispers of cooling housing and rental prices in the San Francisco Bay Area, but that hasn't yet translated into practical, noticeable … END_OF_DOCUMENT_TOKEN_TO_BE_REPLACED

Cars pass in Independence Square at twilight in Kyiv, Ukraine, Monday, Oct. 31, 2022. Rolling ... [+] blackouts are increasing across Ukraine as the … END_OF_DOCUMENT_TOKEN_TO_BE_REPLACED