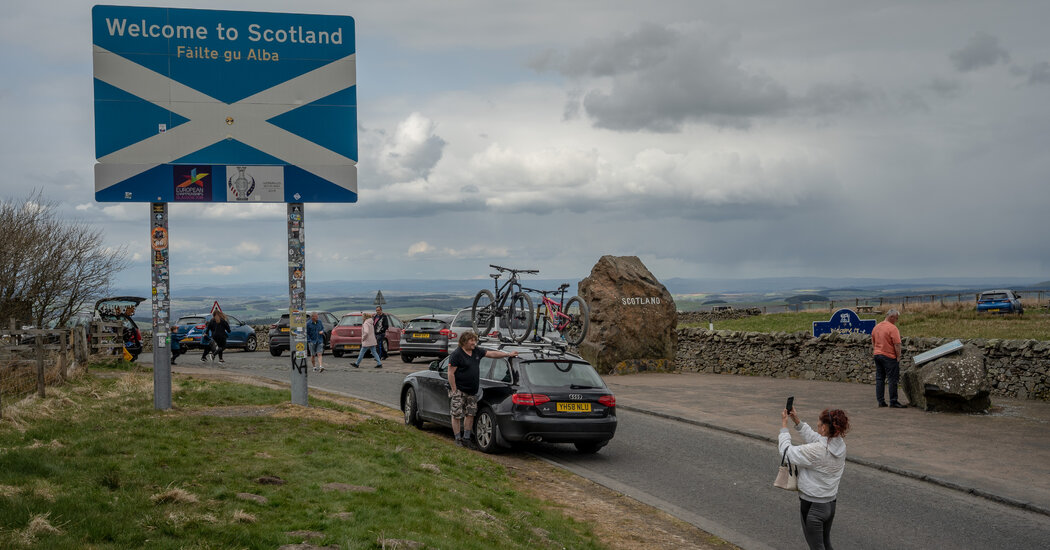 If the pro-independence vote surges in Thursday’s elections for the Scottish Parliament, momentum for an another referendum on independence may become unstoppable.

It has weathered the conquest and loss of an empire, survived two world wars and witnessed more than one deadly pandemic. But now Scotland’s ancient alliance with England is itself in poor health and on Thursday it could take a serious turn for the worse.

When Scottish voters go to the polls to elect 129 members of Scotland’s Parliament , strictly speaking the question of independence will not be on the ballot.

Yet, as these photos vividly illustrate, Scotland is grappling with an uncertain future. Pressure is growing for a second referendum on whether to leave the United Kingdom, breaking up a 314-year-old union. If Scots vote in sufficient numbers for pro-independence parties in Thursday’s election, the momentum for another plebiscite could become unstoppable.

shellfish catches spoiled and boats tied up in harbors.

Both sides of the debate see lessons in that. The pro-independence Scottish National Party, led by the first minister, Nicola Sturgeon, points to the economic damage and says she would aim to rejoin the European Union after breaking away from England. In so doing Scotland could make a success of independence like other small nations like Ireland, which took that step a century ago.

Her critics say that this would pile more economic misery on top of Brexit by destroying the common economic market with England, easily Scotland’s biggest trading partner. It would probably also mean a physical trade border between England and Scotland, a frontier that is in some places hard even to spot.

Nonetheless, the 2016 Brexit referendum showed that appeals to emotion can trump those to the wallet. In Scotland identity issues have grown within a proud nation that always maintained a separate, some would say superior, legal and educational system.

Ms. Sturgeon’s S.N.P. is aiming for a rare overall majority in the Scottish Parliament to justify her calls for a second independence referendum. Failing that, she hopes that votes for other pro-independence parties, especially the Greens, will be enough to bolster her case.

Support for independence in opinion polls peaked last year at above 50 percent while Ms. Sturgeon’s handling of the pandemic looked sure-footed at a time when Mr. Johnson’s seemed chaotic.

But the successful rollout the Covid-19 vaccine — for which Mr. Johnson can take credit — has coincided with a slight dip in Ms. Sturgeon’s fortunes. Also campaigning in Thursday election is Alex Salmond, a veteran of the pro-independence cause but now a sworn enemy of Ms. Sturgeon who was once his protégé. The two politicians fell out over Ms. Sturgeon’s role in a bungled investigation into allegations against Mr. Salmond of sexual misconduct.

After months of feuding with her former mentor, Ms. Sturgeon survived a damaging crisis but Mr. Salmond has formed a new pro-independence party, Alba.

There are domestic issues at stake too and, after 14 years in power in Edinburgh, the S.N.P. has many critics in Scotland. In TV debates Ms. Sturgeon has been forced to defend her record on everything ranging from educational achievement to Scotland’s poor record on drug deaths.

In the Shetland Islands some voters feel as remote from Ms. Sturgeon’s government in Edinburgh as from Mr. Johnson’s in London, and there is even talk of the islands opting for independence from Scotland.

On the mainland the mood is uncertainty. For Ms. Sturgeon tough questions lie ahead about whether an independent Scotland could afford the sort of social policies she favors without the support of taxpayers in England or their central bank.

Noticeably absent from these photos is Mr. Johnson, who has stayed away from Scotland, knowing that his presence would probably undercut the Conservative Party’s pitch to preserve the union. Educated at Britain’s most famous high school, Eton College, and then Oxford University, Mr. Johnson’s cultivated English upper-class persona tends to grate on Scottish voters.

Despite his absence the stakes are for high for Mr. Johnson. The loss of Scotland would deprive the United Kingdom of about a third of its landmass and significant international prestige.

It would also likely mean the closure of the Faslane nuclear submarine base that the S.N.P. opposes, believing its location makes the nearby city of Glasgow a military target.

Were Mr. Johnson to lose a Scottish independence referendum, he would probably have to resign, and his strategy so far has simply been to reject calls for one. For a plebiscite to be legally binding an agreement almost certainly would have to first be struck with London, and the prime minister can continue to stonewall for some time.

But whatever the law, it’s hard to say no indefinitely. And a centuries-old union could face its greatest test if a majority in Scotland, which joined voluntarily with England in 1707, thinks now is the time to think again.

The Seattle Seahawks are very much still in the running for Baker Mayfield. (Photo by Stacy ... [+] Revere/Getty Images) Getty Images The Seattle … END_OF_DOCUMENT_TOKEN_TO_BE_REPLACED

(CNN) — Kim Kyung-seop recalls going to cheap bars after class with his friends, where they binged on as much makgeolli as possible. "You know the … END_OF_DOCUMENT_TOKEN_TO_BE_REPLACED