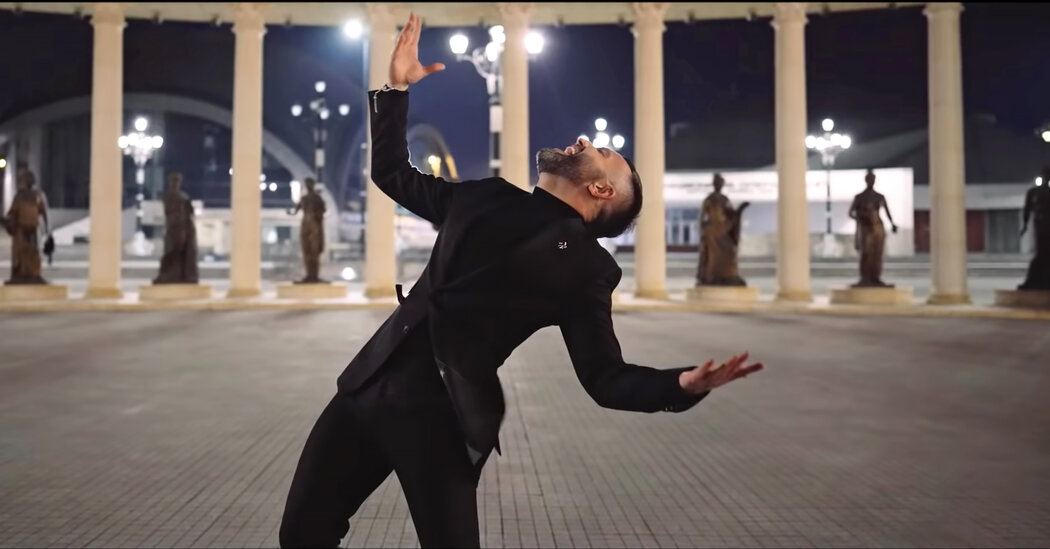 LONDON — When the Eurovision Song Contest was canceled last March because of the coronavirus pandemic, Vasil Garvanliev, North Macedonia’s entry, was distraught.

“My whole life, I’d been working my butt off to get there and my journey didn’t even take off,” Garvanliev, 36, said in a telephone interview. “I was devastated.”

For Garvanliev — and the event’s hundreds of millions of fans — Eurovision is far more than a glitzy, high-camp song contest. “It’s the Olympics of singing,” Garvanliev said.

Last March he sat on his bed feeling depressed, he remembered, before picking up a keyboard to try to console himself. He started picking out a gentle melody on the instrument, then lyrics popped into his head. “Wait, it won’t be long,” he sung, “trust your heart and just stay strong.”

Abba and Lordi, a Finnish heavy metal act whose members dress as monsters.

The arena will be at 20 percent capacity, with just 3,500 people in the audience cheering the contestants on, while remaining seated to lessen the risk of coronavirus spreading. The event is officially part of a series of Dutch government trials to see how to run large events in a safe way. The contestants will all have made prerecorded versions of their songs in case they catch Covid-19 and are unable to perform.

But perhaps the most unusual aspect is that all the returning contestants will be performing a different song than the one they had planned for the 2020 event. In a competition known for one-hit wonders, who disappear from view almost as soon as the contest ends, this year’s contestants have to prove they don’t fit that pattern.

Here I Stand” wouldn’t fall into that trap.

Think About Things,” a catchy disco number about his newborn child.

By the time Eurovision was canceled, the song’s video had been watched millions of times on YouTube. Soon, it was going viral on Twitter and TikTok too, after families started performing variations of the video’s dance routine while stuck at home in lockdown.

“It changed my life, that song,” Freyr said in a video interview. Before the pandemic, Freyr generally only got booked for shows in Iceland, he said. Suddenly he was selling out tours across Europe.

10 Years,” this time about his marriage (“How does it keep getting better?” he sings in the chorus). He felt he had to keep the track similar in style to “Think About Things,” since Icelanders had voted for a fun disco tune to represent them at the competition, he said. It still took 12 attempts to come up with a new song he liked, he added.

The track’s so far not gone viral, but Freyr said that didn’t bother him. “I didn’t go to try and recreate the success, because I know it’s impossible to predict something like that,” he said. “Luck has to be part of it.”

Four other Eurovision returnees said in interviews that they found the pandemic to be the biggest hurdle to writing a new hit. “For the first three or four months of the pandemic, I just didn’t do any writing at all,” said Jessica Alyssa Cerro, Australia’s entry, who performs as Montaigne.

“I sort of got to November and was like, ‘Hmm, I should probably start working on that Eurovision song, huh?’” she added.

Jeangu Macrooy, the Netherlands’ entry, said in a telephone interview that he similarly struggled. “I was getting no inspiration — I was just sitting inside,” he said.

Then, in December when he was trying to write entries for the contest, a host of thoughts and feelings around George Floyd’s murder and the subsequent resurgence of the Black Lives Matter movement started bubbling up inside him.

Birth of a New Age,” an uplifting track about being “the rage that melts the chains.” Macrooy said he hoped it would speak to everyone standing up for their rights now, whether people of color, L.G.B.T.Q. people or the otherwise marginalized. The chorus of “You can’t break me” is sung in Sranan Tongo, the lingua franca of his native Suriname in South America.

Technicolour,” which she recorded in March.

with thousands of new cases of coronavirus currently being reported every day. “It would have been so bad if I was the person who brought coronavirus back to Australia, where we’re sitting in stadiums, having a good time dancing and touching each other,” she said.

Even without attending, she still has a story to “tell my grandkids about,” she said. She’s the only Eurovision contestant ever to have missed the event twice because of a pandemic.

The Seattle Seahawks are very much still in the running for Baker Mayfield. (Photo by Stacy ... [+] Revere/Getty Images) Getty Images The Seattle … END_OF_DOCUMENT_TOKEN_TO_BE_REPLACED

(CNN) — Kim Kyung-seop recalls going to cheap bars after class with his friends, where they binged on as much makgeolli as possible. "You know the … END_OF_DOCUMENT_TOKEN_TO_BE_REPLACED