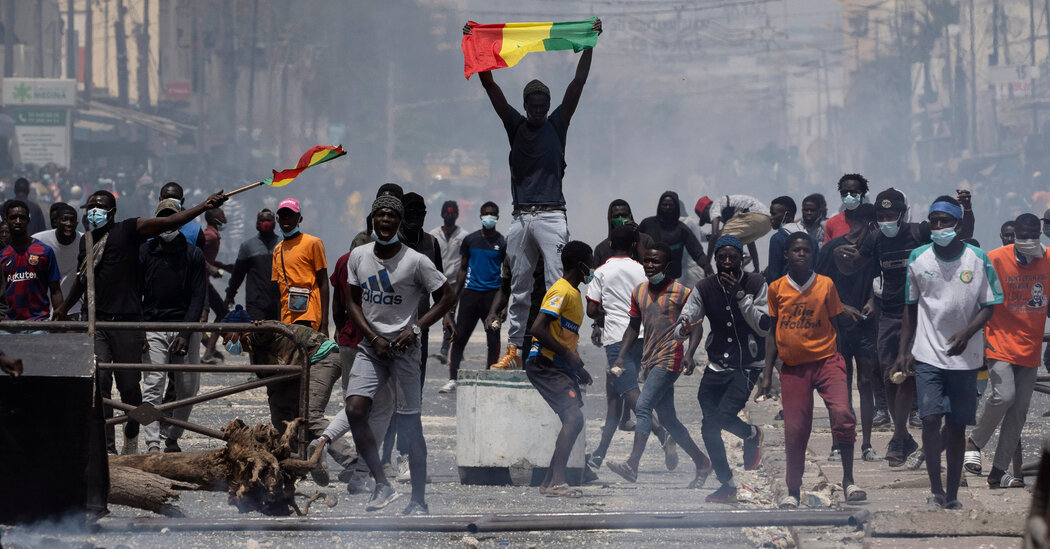 DAKAR, Senegal — The most widespread demonstrations in Senegal in years continued for the third day on Friday, an expression of anger at the president, Macky Sall, and outrage at the arrest of the country’s leading opposition figure, who has been accused of rape.

In Dakar, the capital, crowds of young people threw stones at the police, who were firing tear gas. In the residential neighborhood of Medina, a police van accelerated into a cluster of protesters, almost running them over. In Ngor, a fishing village abutting the city’s fanciest district, protesters lit fires in the streets.

One person died on Thursday when security forces used live ammunition on protesters in Bignona, a town in the country’s south, according to the human rights organization Amnesty International.

The arrest of the opposition leader, Ousmane Sonko, on Wednesday was the trigger for Senegalese young people, many of whom support Mr. Sonko, to take to the streets. Mr. Sonko, who came in third in the 2019 presidential elections, has been accused of raping a young woman who worked in a massage parlor.

wrote, adding that the event “boasts of being exemplary, by always comparing itself to less successful ones on the continent.”

Cheikh Oumar Cyrille Touré, a well-known rapper also known as Thiat, said in a televised debate on Wednesday, “Nothing is working in this country, while they keep giving us political speeches.”

He was co-founder of the group Y’en a Marre (We’re Fed Up), which was instrumental in bringing Mr. Sall to power. But Mr. Touré was arrested on Friday in the protests and, according to the Y’en a Marre Facebook group, violently beaten.

Two television stations, Sen TV and Walf TV, were taken off the air, accused by the government of calling for an uprising by showing images of insurrection.

Protesters assaulted on Thursday the buildings that house two other media organizations, RFM and Le Soleil, both perceived as being pro-government.

Mr. Sonko was arrested on Wednesday on his way to court. His convoy was stopped and the police asked him to take a different route. When he refused, he was arrested.

Amnesty International said that Mr. Sonko was arrested arbitrarily, and called on the government to stop arresting opponents and activists.

During Mr. Sall’s tenure, two of his major opponents, a mayor of Dakar and the son of the last president, have also been arrested and jailed.

Mr. Sonko’s supporters say that the Senegalese president is behind his arrest and the rape charges. They say he is trying to prevent one of his biggest political challengers from running in the next election, in 2024.

“That’s why he’s doing all this,” said Serigne Fallou Sarr, a biology student out protesting on Friday in Dakar.

He said he had no idea whether the rape allegations were true.

The voice of the woman who accused Mr. Sonko has been drowned out in a sea of accusations and conspiracy theories.

The woman, a young masseuse who said Mr. Sonko also threatened to kill her, told the police that the politician, who has admitted that he was a frequent visitor to the massage parlor at which she worked, frequently asked her for sex and when she refused, strangled and raped her.

The president denied having anything to do with the rape allegations in an interview with France24 television, aired before this week’s protests.

“We mustn’t mix the president up in things that don’t concern him,” he said, referring to himself in the third person. “I think I have enough things to do without plotting such low things.”

Mr. Sall has not commented on reports that he might run for a third term, which his opponents say would violate the constitution.

Chief Covelli said Mr. Crimo planned the shooting for several weeks, but that the authorities had not yet established what his motive was. “We have no … END_OF_DOCUMENT_TOKEN_TO_BE_REPLACED

Kevin McKenzie and Martine van Hamel were standing in the dining room of their weekend house in Woodstock, N.Y., trying to figure out when they got … END_OF_DOCUMENT_TOKEN_TO_BE_REPLACED