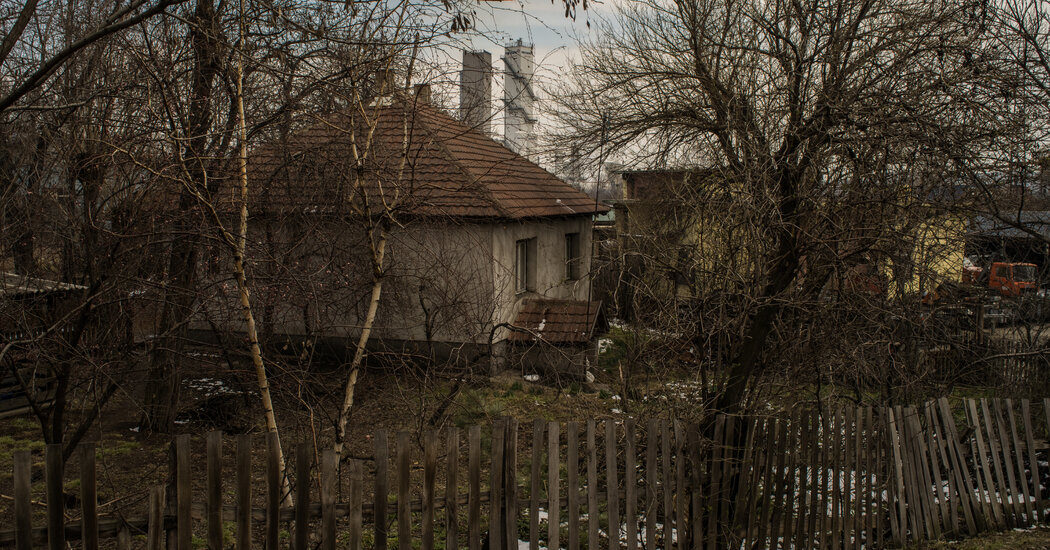 METOVNICA, Serbia — The well in the retired couple’s yard, their only source of clean water, began to dry up two years ago. Last year, dead fish started washing up on the banks of the river that runs by their home in a bucolic village in southeastern Serbia.

But most disturbing of all for Verica Zivkovic and her husband, Miroslav, are the ever-widening cracks in the walls of the house they built after moving to the countryside more than a decade ago to raise goats.

“We came here for the peace and quiet,” said Ms. Zivkovic, 62, but that all changed when a Chinese company arrived.

In 2018, the company, the Zijin Mining Group, took control of a money-losing copper smelter in the nearby city of Bor and began blasting away in the nearby hills in search of copper and gold.

pro-democracy group Freedom House downgraded Serbia in 2019 from “free” to “partly free,” citing a tightening grip on politics, civil liberties and the media.

In January, 26 members of the European Parliament demanded a review of the “growing impact of China’s economic footprint in Serbia,” including “reckless projects with potentially devastating multiple impacts on the wider environment as well as surrounding population.”

The roots of Serbia’s tilt toward China date to 1999, during the Kosovo war, when U.S. warplanes mistakenly bombed the Chinese embassy in Belgrade, killing three Chinese journalists. On that site now stands a huge Chinese cultural center. A marble memorial stone outside bears inscriptions in Serbian and Chinese hail China’s “martyrs.”

But memories of shared suffering at American hands have faded in places like Bor, site of the Chinese-owned smelter.

Pollution from the Bor plant skyrocketed to many times the legally permitted level in 2019 and 2020, setting off a series of street protests and prompting Zijin Mining’s general manager in Serbia to tell his managers last October that he was “very dissatisfied” with the “frightening” level of pollution, according to leaked minutes of the meeting.

He blamed the bad publicity, which he said had damaged “the government of the People’s Republic of China,” on “people who are in favor of the West and receive support” who “have stood in opposition to our work.”

But, apparently worried about losing votes, he announced last year that he would file a court case against Zijin for negligence. It is not clear whether he actually did so. The mayor declined to be interviewed. Zijin Mining did not respond to requests for comment.

Milenko Jovanovic, an air pollution expert, said he was fired in November from Serbia’s Environmental Protection Agency after raising concerns about dangerously high levels of sulfur dioxide and arsenic in the air around Bor.

The government, he said, rejected anything that might upset China and its investors. “It lets them do whatever they want to do,” he said.

A court in Belgrade ruled this month that Mr. Jovanovic had been unfairly dismissed and ordered that he be given his job back.

Activists concede that air pollution levels in Bor have fallen since protests, but say that the main danger has now shifted to towns and villages to the south, where hundreds of Chinese workers brought in by Zijin are developing one of the world’s biggest unexploited copper deposits, and digging for gold.

The earth around the new mine trembles from blasting work and the heavy trucks, driven by Chinese workers, that rumble along roads adorned with China’s red national flag. Rivers and streams are discolored by effluent.

The government has added to public anger by issuing expropriation orders so that Zijin can build access roads and expand its mine. Dragan Viacic, a farmer, said he had received a letter from Serbia’s finance ministry informing him that he must sell 13 acres of his land at a fraction of the market price.

“They said this was necessary in the public interest but in reality this is just the interest of the Chinese,” he said.

In Metovnica, a village near the mine, Mr. Zivkovic and his wife used to have 25 goats but, with no clean water on hand after their well dried up, they now keep just one.

“Why don’t we have any water anymore? Why are there no fish in the river?” The answer, he said, is Zijin Mining Group.

Pointing to fissures radiating across the wall of his house that appeared last year after Chinese miners started using explosives, Mr. Zivkovic said: “It was a tiny crack at first but then it spread.”

Confident that it has the support of Mr. Vucic and his officials, the mining company and other Chinese ventures in Serbia have mostly ignored complaints and shrouded their operations in secrecy.

Sasa Stankovic, an environmental activist and elected member of the Bor regional council, said he had tried unsuccessfully to contact Zijin to discuss pollution levels. The copper smelter in Bor, he said, had been hazardous to health for decades, but the dangers jumped sharply after Zijin arrived and ramped up production.

Bor now accounts for a stunning 80 percent of Serbian exports to China, repeating a pattern widely seen in Africa of Chinese firms extracting natural resources for shipment back to China.

At Slatina, a village down the road, Miodrag Zivkovic, a local farmer stood on a rickety bridge over the Bor River, its waters thick with sludge and garbage, and said: “We didn’t go to the Chinese mine but the mine came to us.”

All the same, he said, given the few jobs available in the region, his son would still like to get work at the smelter, which pays relatively well. “Everyone here needs a salary and is ready to risk everything,” he lamented.

DALLAS — The rollback of abortion rights has been received by many American women with a sense of shock and fear, and warnings about an ominous … END_OF_DOCUMENT_TOKEN_TO_BE_REPLACED

The poshest place in California's Coachella Valley is The Madison Club. This exclusive gated community in La Quinta is where A-listers and tycoons … END_OF_DOCUMENT_TOKEN_TO_BE_REPLACED