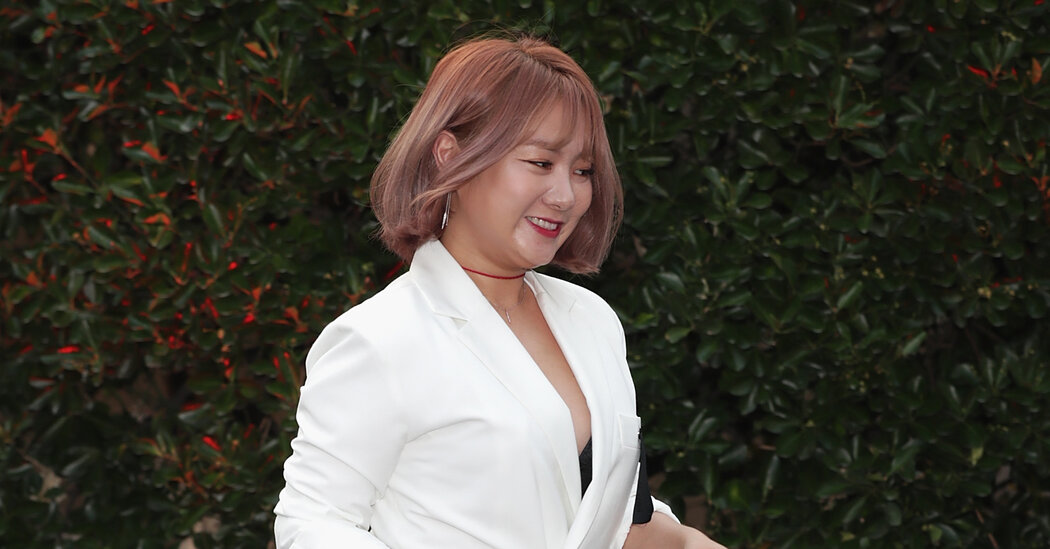 Park Na-rae, a comedian, grabbed a male doll, placed its plastic arm between its legs and made a suggestive remark.

By the standards of Western comedy, the stunt on her YouTube show in March would have hardly seemed offensive. But the skit became a scandal in her home country, South Korea. Legions of aggrieved young men accused her of sexual harassment. The police are investigating.

The scandal has made headlines for weeks and has threatened to inflict lasting damage on Ms. Park’s career, two years after she became the first female comedian from South Korea to host a Netflix special.

Her supporters say the outcry illustrates a double standard in a culture where men often brag about sexual conquests and where sexual harassment is endemic, but where women who dare to mention sex in public can be penalized.

suggested that women use sex to get jobs. Since he was punished for inappropriate comments, they argued, Ms. Park should be called to account, as well.

Lee Wonjae, a professor at the Korea Advanced Institute of Science and Technology who studies online, said that most of Ms. Park’s critics were not trolls from misogynistic, far-right websites, but ordinary men from mainstream society.

Professor Lee said that many young men in South Korea — which has one of the highest gender pay gaps in the developed world — feel threatened by certain gender trends and President Moon Jae-in’s attempts to push for gender equality. These men see women as growing competitors for jobs and gaining more bargaining power in the marriage market.

“Why are you going to support women more? Look at me: I’m doing my military service. What are you doing for me?” he said of how young men see their lot in life. “That is the message.” (Men in South Korea age 18 to 28 are required to serve in the military for about two years.)

Sexism is deeply entrenched in South Korea. There is an epidemic of men using hidden cameras to spy on women in public restrooms and changing rooms. Misogynistic posts are a defining feature of Reddit-like forums. “It’s everyday life, this kind of gender conflict, misogyny, backlash and hatred,” Dr. Mo said.

Park Won-soon, was one of many male politicians to be accused of sexual harassment. (He died by suicide last year.) And the Seoul authorities apologized this year after issuing guidelines that advised pregnant women to cook, clean and work on their appearances to ensure that their husbands still found them attractive.

sentenced to prison in 2019 for raping women who were too drunk to consent to sex.

Yet, other male celebrities and public figures have made sexist remarks without facing the kind of scrutiny faced by Ms. Park. She already had a reputation for pushing the boundaries of what female South Korean comedians can say or do. She began her 2019 Netflix special, “Glamour Warning,” by talking about her “first time doing it without a man.”

Ms. Park resigned from her YouTube show a few days after the scandal broke. The Seoul police later said that they were investigating the harassment claims to determine whether she had broken any laws. The police did not immediately respond to requests for comment.

OpenNet, a South Korean nongovernmental organization that advocates for internet privacy, said this month that her doll stunt did not constitute sexual harassment under policies set by the Ministry of Gender Equality and Family. The group said that she had merely tried to express female sexual identity.

Ms. Park’s talent agency, JDB Entertainment, said that she was not available for an interview.

In a handwritten note to her 1.8 million Instagram followers in March, Ms. Park said that it was her duty as a performer and public figure to “take responsibility” for her own acting and props. “I am nothing but sorry to the many people who trusted and supported me,” she wrote.

Last month, she visited her grandparents for one of her other television shows, “I Live Alone,” and expressed remorse for how her stunt with the doll had caused harm to her castmates.

“Humans are imperfect,” her grandfather, who was not named in the broadcast, said as Ms. Park burst into tears. “Don’t listen to hate.”

America is absorbing the shock of another bloody mass shooting, a day after an 18-year-old man wearing body armour and carrying assault rifles entered … END_OF_DOCUMENT_TOKEN_TO_BE_REPLACED

Once home to baseball Hall of Famer Ty Cobb, this estate rests on the eastern shores of Lake Tahoe. Now, 1472 Flowers Ave. is on the market asking … END_OF_DOCUMENT_TOKEN_TO_BE_REPLACED