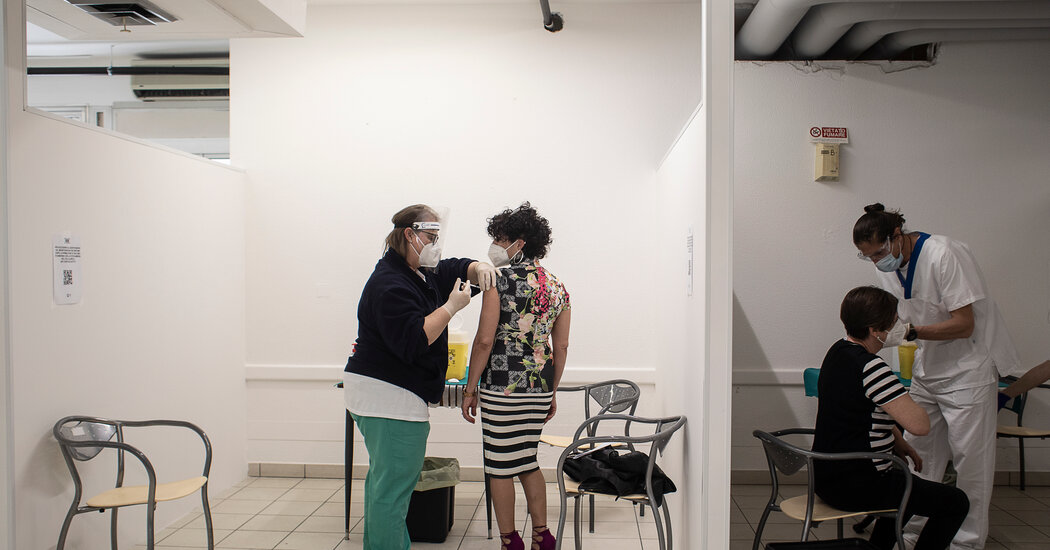 SAN MARINO — On the ground floor of the only hospital in San Marino, a tiny, independent republic perched high above the surrounding Italian countryside, nurses prepared Covid-19 vaccine doses from glass vials labeled in Cyrillic script, flicked needles and sought to put nervous residents at ease.

“Have you started speaking Russian since you got your first shot?” one nurse asked, coaxing a smile from Erica Stranieri, 32, as he injected Russia’s Sputnik vaccine into her arm.

San Marino, an ancient enclave within northern Italy, topped with crenelated medieval battlements on a mountain near the Adriatic coast, is best known — to the extent it is known at all — as one of the smallest countries on Earth.

the Sputnik vaccine, which has not been authorized by European or Italian drug regulators. For San Marino, it seemed like the natural thing to do.

Beslan school siege of 2004. At the national university is a bust of the first person in space, the Soviet cosmonaut Yuri Gagarin.

San Marino did not back sanctions against Russia over the invasion of Crimea. In 2019, Sergey Lavrov, Russia’s foreign minister, visited San Marino without stopping in Italy.

“Politically there is a strong link,” said Sergio Rabini, 62, the director of the San Marino hospital, who was himself hospitalized with Covid in October. He walked past the Covid ward, still packed with patients intubated in intensive care, and down to the vaccination center.

“Here’s Sputnik,” he said, holding up one of the thawing vials. He said it wasn’t the first time his country hadn’t followed the lead of Italian or European regulatory agencies.

gain influence in Europe, exploiting rifts between the European Union, which has had a disastrously slow vaccine rollout, and some member states. This week, Slovakia’s prime minister resigned amid an uproar over his secretly arranging a delivery of Sputnik.

to 26 percent of its people, more than double the E.U. average. Officials say hundreds of Italians have tried to make vaccination appointments there, and some even showed up, hoping in vain to get vaccinated by the foreign state next door.

Some Italians see in San Marino’s embrace of Sputnik only its latest provocative pandemic behavior. In November, when Italy imposed a 6 p.m. curfew on eateries, San Marino kept its bars and restaurants open until midnight, luring Italians and their euros across the invisible border to what Italian officials worried was a hilltop viral breeding ground.

“It was mostly young people who took advantage to go out at night,” said Aldo Bacciocchi, 50, whose restaurant, Ristorante Bolognese, was recently featured on Russian television. Now, San Marino’s restaurants must close by 6 p.m., and Mr. Bacciocchi said that business was lousy and that he didn’t see a way back to normalcy unless people got vaccinated. His mother, 77, was scheduled to receive her second dose of Sputnik on Friday.

A shade of that normalcy returned to the center of San Marino on Thursday, for the biannual installation of the country’s two heads of state, known as Captains Regent.

Throughout the morning and early afternoon, military marching bands wearing helmets festooned with feathers snaked up and down the sloping stone streets, past luxury watch and jewelry shops, the “Torture Museum,” souvenir traps and a multitude of stores selling guns, crossbows and swords, a legacy of San Marino’s medieval armory industry and relaxed gun laws.

Bishops and ambassadors and men in top hats joined the procession, and so did some local residents wearing ghost masks, silently protesting the coronavirus lockdown measures.

“San Marino is not Europe, and we’re not getting any help,” said Massimiliano Carlini, 58, the protest organizer, referring to the lack of funds directed to struggling businesses. Himself a vaccine skeptic, he wasn’t sure inoculations would help, though he welcomed Russia’s involvement. “Sputnik is the only one I think people should be taking.”

Among the protesters was Matteo Nardi, the nurse who had vaccinated Ms. Stranieri. An Italian by nationality, he wondered why Italy, struggling with vaccine shortages, didn’t offer Sputnik, too.

AUSTIN, Texas--(BUSINESS WIRE)--As the first multifamily management company to be recognized in the Public Relations and Marketing Excellence Awards, … END_OF_DOCUMENT_TOKEN_TO_BE_REPLACED

There have been whispers of cooling housing and rental prices in the San Francisco Bay Area, but that hasn't yet translated into practical, noticeable … END_OF_DOCUMENT_TOKEN_TO_BE_REPLACED

Cars pass in Independence Square at twilight in Kyiv, Ukraine, Monday, Oct. 31, 2022. Rolling ... [+] blackouts are increasing across Ukraine as the … END_OF_DOCUMENT_TOKEN_TO_BE_REPLACED