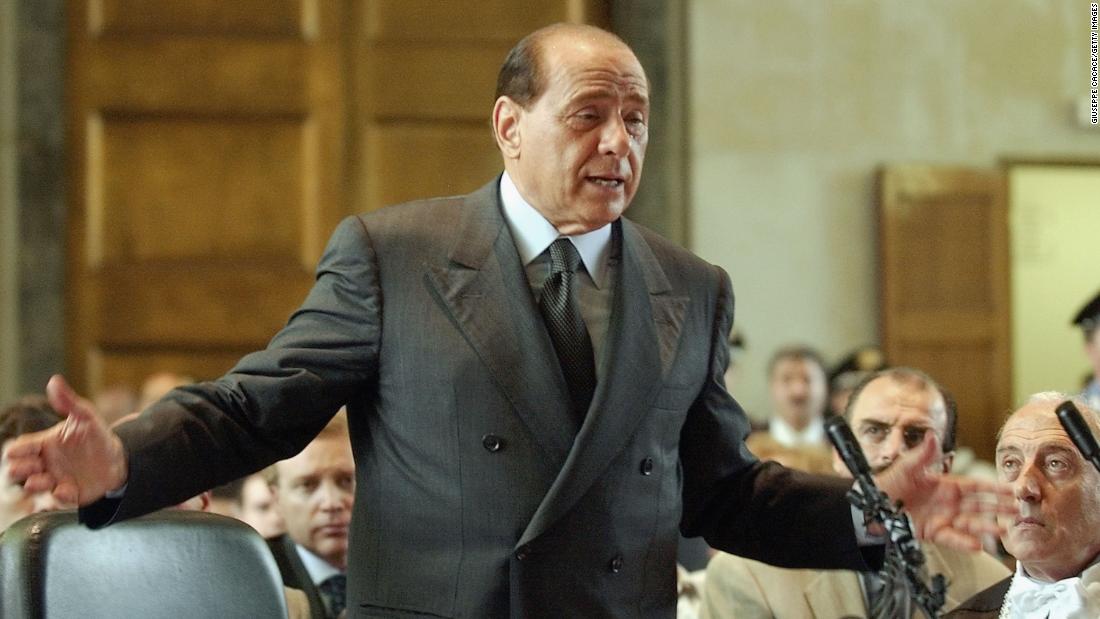 Here’s a look at the life of billionaire and former Italian Prime Minister Silvio Berlusconi.

He has been the subject of multiple corruption and bribery trials.

He has been treated for prostate cancer.

January 26, 1994 – Resigns all his positions at Fininvest to enter politics, but still holds stock.

1994 – Forms the Forza Italia Party and is elected prime minister.

December 22, 1994 – Is removed from office after losing the support of other political parties.

1996 – Loses the election for prime minister to Romano Prodi.

December 1997 – Is sentenced to 16 months in prison for accounting fraud at Fininvest. The sentence is later suspended.

February 10, 2004 – Becomes the first leader to visit Libya since Moammar Gadhafi’s promise to end development of weapons of mass destruction.

April 20, 2005 – Resigns but is sworn in as the prime minister again after forming a new government three days later, on April 23.

March 10, 2006 – Prosecutors decide that Berlusconi should be put on trial for judicial corruption.

April 9-10, 2006 – Berlusconi squares off against Prodi in a general election. Early returns indicate Prodi is the winner.

October 30, 2006 – Berlusconi and British lawyer David Mills are ordered to stand trial on charges of tax fraud. Berlusconi is accused of paying Mills $600,000 in exchange for favorable testimony in two cases.

November 26, 2006 – Faints while addressing a rally on live television. Doctors later state that he has an irregular heartbeat.

December 19, 2006 – Receives a pacemaker at the Cleveland Clinic.

March 13, 2007 – The tax fraud trial against Berlusconi and Mills begins. Both Mills and Berlusconi face prison terms from four to 12 years if convicted.

September 24, 2007 – The trial is moved to London to aid witnesses who claim traveling to Italy would be too difficult.

February 21, 2008 – Berlusconi’s tax fraud trial is suspended until after the election.

October 7, 2009 – Italy’s Constitutional Court strikes down a 2008 law that would have given Berlusconi immunity from prosecution.

December 13, 2009 – Berlusconi is attacked at a rally in Milan and suffers a broken nose and several broken teeth.

December 14, 2010 – Survives parliamentary confidence vote in the lower house by three votes. The win sparks a demonstration in Rome where nearly 100 are injured.

January 14, 2011 – Magistrates in Milan reveal they are investigating whether Berlusconi paid for sex with an underage girl and then abused his power by trying to cover it up.

February 15, 2011 – An Italian judge rules that Berlusconi will be tried on charges of sex with an underage girl and abuse of power.

April 6, 2011 – The trial for having sex with an underage girl begins.

November 8, 2011 – Berlusconi says he will resign when the country’s budget is confirmed by parliament.

November 12, 2011 – Berlusconi resigns after the Italian legislature votes in favor of an austerity budget.

October 26, 2012 – Is convicted of tax fraud, sentenced to four years in prison and barred from public office for five years. Berlusconi files an appeal and in 2014, his sentence is reduced to one year of community service at a nursing home.

June 24, 2013 – Berlusconi is found guilty of having sex with an underage prostitute and abuse of power and is sentenced to seven years in prison. An appeals court overturns the conviction in July 2014.

October 2013 – Berlusconi is preliminarily indicted on allegations he bribed a senator to support his party in 2006.

November 27, 2013 – The Italian Senate expels Berlusconi from Parliament with a vote of 192 to 113 (two senators abstained).

July 8, 2015 – Berlusconi is convicted of bribing a senator to change political factions. He is sentenced to three years in prison and banned from holding public office for five years. However, since the statute of limitations is due to expire before any appeals proceeding can take place, Berlusconi will not serve prison time.

June 7, 2016 – Is hospitalized in Milan with a heart-related problem.

May 11, 2018 – The Court of Milan grants Berlusconi “rehabilitation,” effectively lifting the ban on him re-entering politics that has been in place since his 2012 conviction for tax fraud. Under the so-called “Severino Law,” anyone sentenced to a jail term of more than two years is not allowed to run for public office.

January 17, 2019 – Announces he will run for a seat in the European Parliament in the May election.

March 2020 – Donates roughly $11 million to Italy’s Lombardy region to aid in the fight against Covid-19.

September 3, 2020 – Berlusconi is admitted to the hospital after the appearance of coronavirus symptoms and subsequently tests positive for COVID-19.

September 14, 2020 – Berlusconi is released from the hospital after receiving treatment for coronavirus-related pneumonia.

May 11, 2021 – Berlusconi is hospitalized with a covid-related illness, just weeks after being discharged.

May 15, 2021 – Berlusconi leaves the hospital after receiving treatment for symptoms of ‘long’ Covid-19, according to the press office of the Forza Italia party.

America is absorbing the shock of another bloody mass shooting, a day after an 18-year-old man wearing body armour and carrying assault rifles entered … END_OF_DOCUMENT_TOKEN_TO_BE_REPLACED

Once home to baseball Hall of Famer Ty Cobb, this estate rests on the eastern shores of Lake Tahoe. Now, 1472 Flowers Ave. is on the market asking … END_OF_DOCUMENT_TOKEN_TO_BE_REPLACED