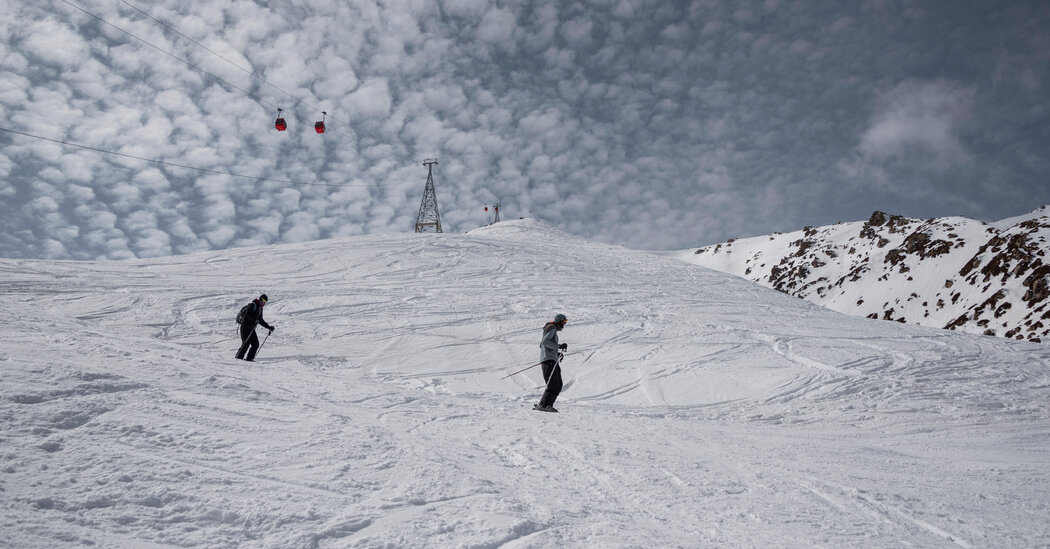 GULMARG, Kashmir — As a soft snowfall blanketed everything around her, Nihad Ashraf Khan, a college student who had been cooped up for months because of the pandemic, ran up to her attic and almost frantically grabbed for her skis, poles, boots and goggles — and headed immediately for the Himalayas.

After driving 30 miles from her house in Srinagar, Kashmir’s biggest city, Ms. Khan reached a scrappy ski town tucked deep into the folds of the world’s highest mountain chain. And she was hardly alone: A steady stream of skiers, music blasting from their cars, were racing to make it to the slopes while the snow was still fresh.

It felt like arriving at a carnival in the middle of a forest, she said.

“I wanted to throw away my mask and wear my skis,” said Ms. Khan, an avid downhill skier. “There was only one place on my mind: Gulmarg.”

Every year, Gulmarg, one of Asia’s largest and highest ski resorts, attracts thousands of skiers, drawn by perfect powder, cheap hotels, breathtaking views and the feeling of an island of peace inside an often restive territory.

snow leopard or a brown bear on the way down.

ski slopes around the world have suffered because of the coronavirus, Gulmarg is having one of its busiest seasons ever. By mid-March, the resort had already drawn 160,000 people, nearly 10 times more than last year and far more than any other season for at least three decades.

fought to break the territory away from India and either join Pakistan or become an independent state. But India isn’t letting go. It has deployed hundreds of thousands of troops, and in 2019, the Indian government stripped the Kashmir region of its autonomy, a move that left even those siding with India feeling betrayed, disillusioned and disenfranchised.

waiting to be frisked by soldiers, part of a security routine that residents say is humiliating.

Growing up here, the turmoil was often so bad that we couldn’t leave our homes, and in fact, until recently, I hadn’t been back to Gulmarg.

The resort, a few miles from the Line of Control that divides India and Pakistan in Kashmir, is surrounded on all sides by Indian forces, who maintain a tight control over the region. Visitors encounter policemen before entering Gulmarg, who search cars and scan passengers.

Still, this was the ski town of my youth, with a few changes. The government rental shop, once offered just a dozen low-grade skis. Now it has a wide choice of world-class equipment. And today you can ride a gondola running along the Apharwat Mountains, one of the highest cable cars in the world at 13,800 feet.

The resort supports 20,000 local residents and 40 hotels. This year, because of the spike in demand, hotel prices have skyrocketed. A double that used to go for $50 costs $200, and many skiers are packing into them, five to a room.

There are still some angrez around — foreigners who make the town their home during the ski season, which can last into April.

Brian Newman, a lanky skier from Colorado, is the head of Gulmarg’s ski patrol. His job includes instructing crews on where to place dynamite to trigger man-made avalanches to prevent natural ones.

“It’s not a world class resort,” Mr. Newman admitted. But, he said, “it is special” because of the wide open terrain and amazing vistas.

Each day, skiers of all abilities pile out of buses and battered Indian jeeps. They take their place at the cable car station where the parka-clad crowds inch forward on their skis, ready to be transported through the clouds to a ridgeline that looks out over the Kashmir Valley.

There are four bunny ski runs for beginners and one slope running for miles, reached only by a gondola. There is also sledding, and each morning legions of young Kashmiri men trudge up the slopes tugging their long wooden sleds. Chai-wallahs stand in clumps, pouring out steaming cups of tea for skiers taking a break in the iridescent sunshine.

On a bright morning a few weeks ago, Fanny Godara, a French businesswomen who runs a restaurant in the southern Indian city of Pondicherry with her Indian husband, watched her children learn parallel turns on a beginner’s slope.

Like every parent, she said, she had been worried about the well-being of her two children during lockdown. Amid canceled holidays and before an impending move back to France, her children jumped at the chance to learn to ski.

“There is something magical about this place,” Ms. Godara said. “You want to come back, again and again.”

Ms. Khan, the skier who rushed to get here at the first sign of snow, had been restless for months, hunkered down indoors, infections surging around her, friends and relatives falling sick.

Staying inside was becoming impossible, she said, and the snowflakes falling outside her window were an irresistible invitation.

Lockdown restrictions have gradually eased in India, and much of the economy has been operating normally the past few months. In Gulmarg, crowded with skiers and snow lovers, social distancing was aspirational at best.

But Ms. Khan, 23, who is studying biosciences, said she still felt safe. As she slid off the chair lift on the 11,500 foot Merry Shoulder peak, she said she had never seen so many other people on the slopes.

Before she plunged down, she looked over her shoulder at her friend Ishani Jamwal, another college student, and yelled out: “How does it look from here?”

“Like a beautiful dream,” Ms. Jamwal yelled back. “I don’t want to blink.”

An affordable center-chimney Colonial in Glastonbury, CT, is the oldest property to hit the market this week on Realtor.com®.Offered at a steep … END_OF_DOCUMENT_TOKEN_TO_BE_REPLACED

Nissan was one of the early pioneers of the electric car. The Leaf has now sold over 600,000 units worldwide since its launch in 2011 and is still … END_OF_DOCUMENT_TOKEN_TO_BE_REPLACED

RUDNE, Ukraine — Yurii Brukhal, an electrician by trade, didn’t have a very dangerous role when he volunteered for Ukraine’s territorial defense … END_OF_DOCUMENT_TOKEN_TO_BE_REPLACED