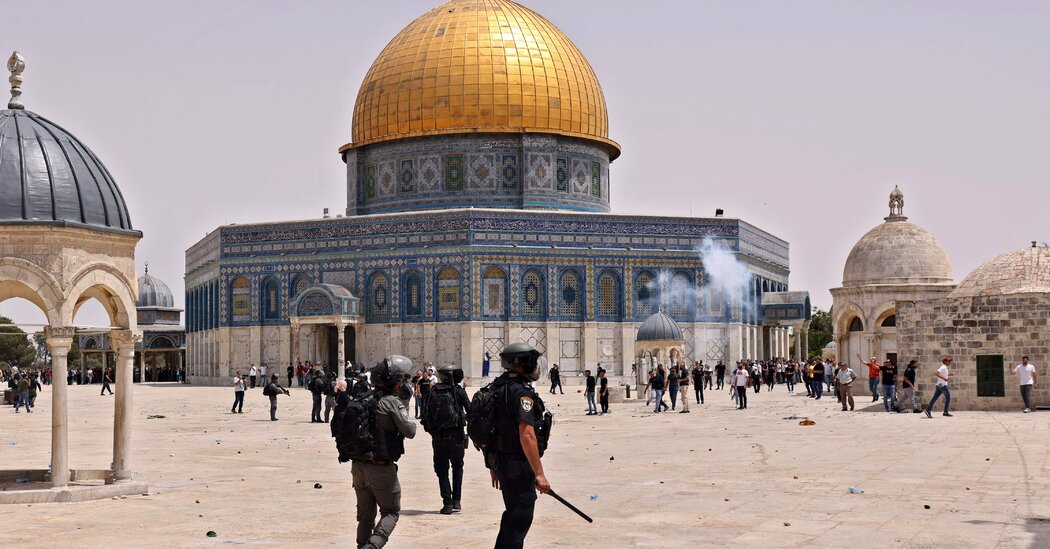 A small skirmish at the Aqsa Mosque compound in Jerusalem on Friday afternoon underscored the simmering tensions that gripped Israel only hours after an intense diplomatic effort brought about a fragile cease-fire.

The clash broke out shortly after the conclusion of midday prayers, as Israeli police officers entered the mosque compound and fired tear gas and sound grenades.

The Palestinian Red Crescent reported 21 injured, two of whom were taken to the hospital. Nine people were arrested, according to Israeli public radio.

A large raid by Israeli police officers more than a month ago at the mosque was one of the key catalysts that ignited the worst violence to rock the region in seven years.

Micky Rosenfeld, a spokesman for the Israeli police, said that rocks had been thrown at officers standing outside the Chain Gate, one of the entrances to the compound. He said the forces had entered the site to pursue the people who threw the rocks. He said he was not aware of any arrests as of 2:20 p.m.

Thousands of worshipers had come to the mosque compound for midday prayer, filling much of the site’s indoor and outdoor spaces.

Standing under the blazing sun, worshipers intermittently chanted, “God is great,” as imams led them in prayers, including a special one for people killed in the latest round of violence.

Hundreds gathered on steps near the Dome of the Rock, the place from which Muslims believe the Prophet Mohammed ascended to heaven. They chanted praise for the Qassam Brigades, the military wing of Hamas.

Israeli police officers wearing helmets had been posted behind barricades near entrances to the compound, keeping a distance from worshipers while watching them exit the area.

SAN FRANCISCO — Cleve Jones has lived in the Castro neighborhood for nearly 50 years, almost from the day he graduated from high school in Phoenix and … END_OF_DOCUMENT_TOKEN_TO_BE_REPLACED

A home inspection can spare you from unpleasant surprises after you buy. After crunching the numbers, searching your favorite neighborhoods, and … END_OF_DOCUMENT_TOKEN_TO_BE_REPLACED