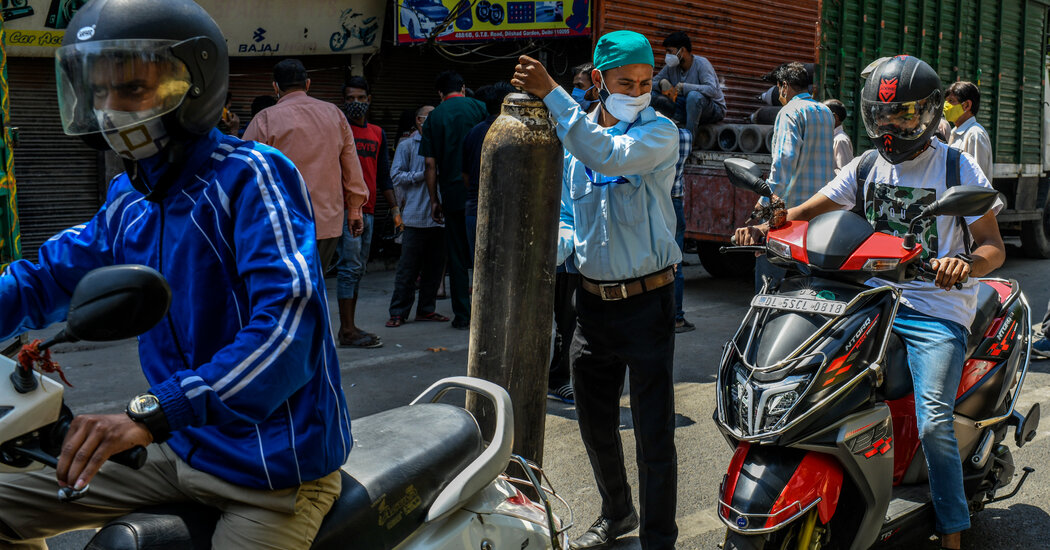 NEW DELHI — Rajni Gill woke up with a slight fever in mid-April, the first warning that she had Covid-19. Within a few days, she was breathless and nearly unconscious in a hospital.

Desperate to arrange plasma treatment for Ms. Gill, a gynecologist in the city of Noida, her family called doctors, friends, anyone they thought could help. Then her sister posted a plea on Facebook: “I am looking for a plasma donor for my sister who is hospitalized in Noida. She is B positive and is 43.”

The message, quickly amplified on Twitter, flashed across the phone of Srinivas B.V., an opposition politician in nearby Delhi, who was just then securing plasma for a college student. He deputized a volunteer donor to rush to the blood bank for Ms. Gill.

“The administration and systems have collapsed,” Mr. Srinivas said. “I have never seen so many people dying at the same time.”

tuk-tuk drivers, who have mobilized online to help the sick, some of them hundreds of miles away. Collectively, they have formed grass-roots networks that are stepping in where state and national governments have failed.

It is a role that Mr. Srinivas, 38, has played before in times of crisis.

As the president of the opposition Indian National Congress party’s youth league, he has provided support after natural disasters, including earthquakes and floods. He has worked to get textbooks to underprivileged children and medicine to people who couldn’t afford it.

India locked down, Mr. Srinivas galvanized young volunteers across the country who distributed food for stranded migrants, along with more than 10 million masks. He now heads a team of 1,000 people, including 100 in Delhi, the center of the current outbreak.

84-second video explaining his techniques so that others can use them.

got a lot of attention, given the intense criticism of Prime Minister Narendra Modi’s handling of the pandemic. (The commission said its appeal had been “misinterpreted, for which we are sorry.”)

Mr. Srinivas’s volunteers use direct messaging to collect data on people needing help, then classify them by risk profile. They work with people on the ground to arrange hospital beds and plasma donations for the most serious cases. Others are put in touch with doctors who can provide remote consultations.

Often, the system’s deficiencies are too great to overcome.

Mahua Ray Chaudhuri frantically tagged Mr. Srinivas looking for oxygen for her sick father. His team found some, but that wasn’t enough: No I.C.U. beds were available.

“At least I could get him oxygen, and he died breathing,” Ms. Chaudhuri said by telephone, breaking down. “This help from strangers on Twitter was like a balm for our disturbed minds and souls.”

But Mr. Srinivas’s team was able to get plasma for Ms. Gill, the gynecologist, just in time. She is now recuperating in a hospital on the outskirts of Delhi.

“I feel choked with emotions,” she said. “Coming out of such a fatal time, I realize I have been helped selflessly by complete strangers.”

She recently called Mr. Srinivas to thank him. “Though I have never met her, it was a humbling experience hearing her voice,” he said. “I am so relieved she made it.”

If you’ve ever dreamed of a quiet life on a boat in Alaska, this new waterfront listing can help you realize that vision.Of course, there's always … END_OF_DOCUMENT_TOKEN_TO_BE_REPLACED