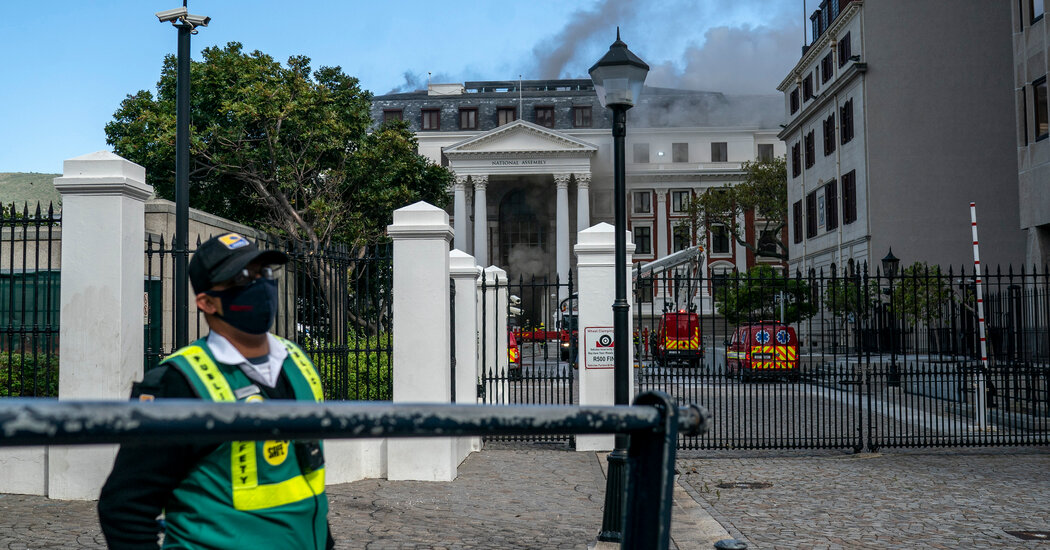 CAPE TOWN — A large fire at South Africa’s Houses of Parliament on Sunday sent flames and smoke billowing from rooftops and fire crews racing to save the historic structures.

Officials said the fire spread from an office space on the third floor of a building adjacent to the old National Assembly building toward a gym and to rooftops. The scale of the destruction was not immediately clear, they said, but there were fires burning in “two very distinct areas,” and they warned that it was likely to be extensive.

“The second point of fire is the National Assembly building, which is gutted,” Mr. Smith said, referring to the building where the Parliament meets. “The structural ceiling has collapsed. The fire staff had to be momentarily withdrawn.”

In March, the older building caught fire, but that blaze was quickly extinguished.

“It’s tragic that we’re starting the New Year on this basis, with a fire in the old assembly that seems to be spreading to the new assembly,” Steven Swart, the chief whip of the African Christian Democratic Party, said on Sunday.

The fire was still burning hours after it was first reported. At least six fire trucks and about 70 firefighters and police officers were sent to the scene, Mr. Smith said, and the streets around the complex were closed off.

The blaze broke out a day after the funeral of Archbishop Desmond M. Tutu, the Nobel Peace Prize laureate who helped lead the fight against apartheid in South Africa. It was held at St. George’s Cathedral, which is a few minutes’ walk from the Houses of Parliament. The archbishop’s ashes were interred in the cathedral on Sunday morning, in a private ceremony for his family at the same time the fire was first spotted.

Cape Town is no stranger to fires, and wildfires on the slopes of its famed Table Mountain have had a devastating impact in recent years. Last year, a wildfire spread to the University of Cape Town, where it devoured the special collections library — home to one of the most expansive collections of first-edition books, films, photographs and other primary sources documenting the history of Southern Africa.

AUSTIN, Texas--(BUSINESS WIRE)--As the first multifamily management company to be recognized in the Public Relations and Marketing Excellence Awards, … END_OF_DOCUMENT_TOKEN_TO_BE_REPLACED

There have been whispers of cooling housing and rental prices in the San Francisco Bay Area, but that hasn't yet translated into practical, noticeable … END_OF_DOCUMENT_TOKEN_TO_BE_REPLACED

Cars pass in Independence Square at twilight in Kyiv, Ukraine, Monday, Oct. 31, 2022. Rolling ... [+] blackouts are increasing across Ukraine as the … END_OF_DOCUMENT_TOKEN_TO_BE_REPLACED