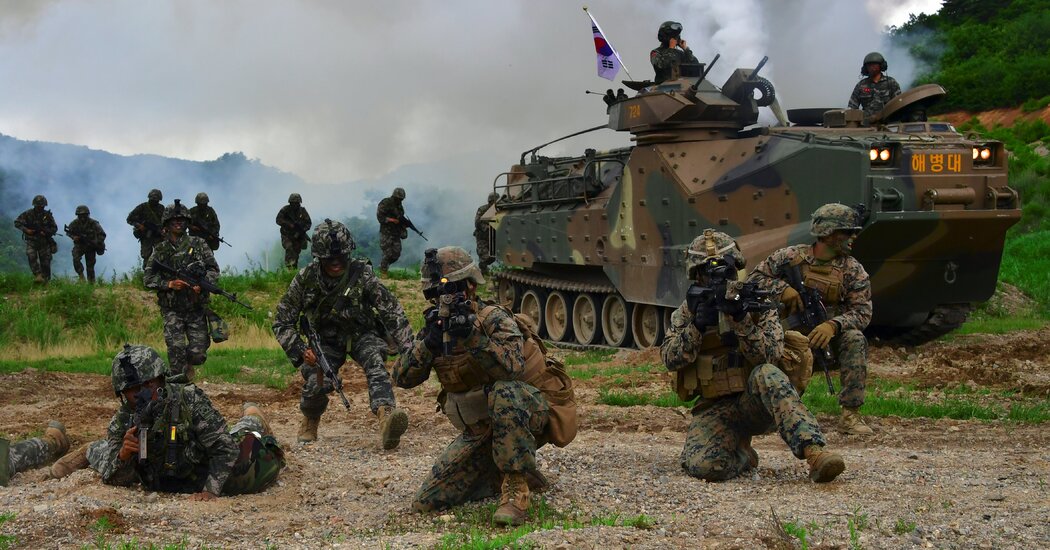 SEOUL, South Korea — South Korea said on Wednesday that it had agreed to increase its share in covering the cost of the American military presence by 13.9 percent this year, removing a prolonged dispute in the alliance ahead of a joint visit by Secretary of State Antony J. Blinken and Secretary of Defense Lloyd J. Austin III.

Differences over how to share the cost of keeping 28,500 American troops in South Korea have kept the allies at odds for years. The issue became particularly contentious under former President Donald J. Trump, who demanded that South Korea drastically increase its payments — by up to five times, according to some reports. Even as he warmed to North Korea’s leader, Kim Jong-un, Mr. Trump often accused South Korea of freeloading on American military power.

Negotiations dragged on for a year and a half, but began making progress after President Biden took office and vowed to restore alliances around the world.

Over the weekend, the United States and South Korea agreed to a five-year deal to increase the military payments, subject to legislative approval in both capitals. Under the agreement, South Korea will pay $1 billion this year, 13.9 percent more than its annual payments in 2019 and 2020, officials said on Wednesday. From next year through 2025, South Korea will increase its portion annually at the same rate it boosts its defense budget — at an average of 6.1 percent per year until 2025.

met North Korea’s leader, Kim Jong-un, three times to try to end the North’s nuclear weapons program, while the allies suspended or scaled down their joint military drills to support the diplomacy. Mr. Trump shocked many in South Korea, especially conservatives, by calling such exercises on the Korean Peninsula “tremendously expensive” and “very provocative.”

ardent champion of diplomacy with North Korea and helped arrange the summit meetings between Mr. Trump and Mr. Kim. He says that a breakthrough in denuclearization talks between Washington and Pyongyang would spawn a political détente on the Korean Peninsula and help realize his dream of increasing economic ties between the two Koreas.

Mr. Moon’s government hopes that the Biden administration will follow up on the diplomacy started by Mr. Trump rather than going back to former President Obama’s policy of “strategic patience,” which focused on squeezing North Korea with sanctions.

After his diplomacy with Mr. Trump failed to lift sanctions against his country, Mr. Kim vowed to further advance his country’s nuclear capabilities, declaring that it would build new solid-fuel intercontinental ballistic missiles and make its nuclear warheads lighter and more precise.

You were seeing double this week: A spectacular $54 million compound featuring two equally luxurious mansions separated by a private lake in Southwest … END_OF_DOCUMENT_TOKEN_TO_BE_REPLACED