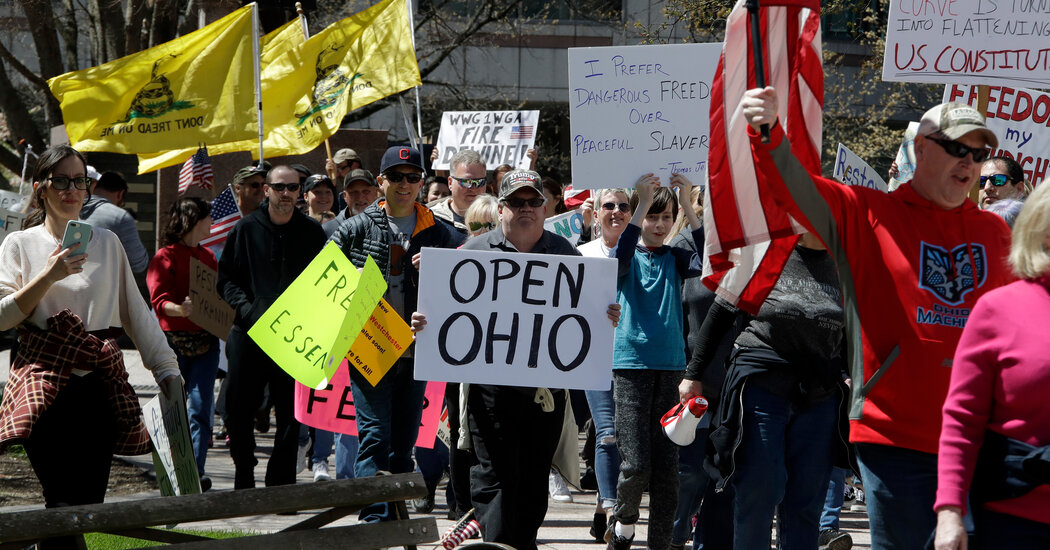 When the pandemic began, the nation’s governors suited up for a new role as state bodyguards, issuing emergency orders to shutter schools, close cinemas and ban indoor dining in an effort to curb a mushrooming threat.

But not everyone likes killjoys, no matter how well-intentioned.

Now, state legislatures — saying the governors have gone too far — are churning out laws aimed at reining in the power of their executives to respond to the pandemic and emergencies like it.

A Kansas bill that this week became law requires Gov. Laura Kelly to suspend all emergency orders and give legislators the option to void any that she reissues. Mask mandates are likely to be among the first to fall. Ohio legislators overrode Gov. Mike DeWine’s veto this week, limiting his powers to make emergency declarations . Utah lawmakers voted for an April 10 end to mask requirements and to rein in powers of the governor and state health officials to deal with crises; the bill became law on Wednesday.

Those are but some of the 300-odd proposals to curb governors’ emergency powers that have won approval or are awaiting action in state House and Senate chambers — although most will, as usual, be winnowed out in committee and never come to a vote.

A list of bills by the National Conference of State Legislators shows that the gamut of the proposals is both broad and inventive. An Arkansas state senator wanted fines for violating coronavirus restrictions refunded to violators. Lawmakers in six states, including Georgia and Oregon want to stop governors from imposing limits on attendance at church services. A measure in Maine would circumvent restrictions on businesses by declaring all businesses to be essential in any emergency.

Most proposals, however, are more straightforward attempts to give lawmakers a say, often by limiting the duration of emergency declarations and requiring legislative approval to extend them. The nonpartisan Uniform Law Commission is reviewing state emergency statutes to see if they need updating in light of the coronavirus crisis. But the American Legislative Exchange Council, a conservative pro-business group that has spent years cultivating ties with state legislators, has beaten them to the punch, circulating a so-called model law that is the basis for many state proposals.

Some experts call that a mistake. “The time for legislatures to address emergency declarations isn’t in the middle an emergency, but before or after one,” said Jill Krueger, the director of the northern region of the Network for Public Health Law, in Edina, Minn.

Indeed, practically every state has at least one measure targeting a governor in a legislative committee or in the lawbooks.

The Republican governor of Indiana, Eric J. Holcomb, has backed more lenient coronavirus restrictions than have governors of some neighboring states, giving businesses more generous occupancy limits based on the severity of Covid-19 outbreaks in each county. That did not stop the Republican-controlled legislature from filing 21 bills aimed at loosening his emergency powers, the most of any state surveyed by the Conference of State Legislatures, including a resolution calling for the statewide emergency to be scrapped immediately.

The resolution appeared to be gathering serious momentum until Tuesday, when the governor sought to address critics by lifting a statewide mask mandate and turning business regulations over to local governments.

Both actions go well beyond the easing of restrictions taken in most other states that have relaxed regulations, although local governments retain the right to impose stiffer rules.

“His middle of the road approach has resonated with people,” said Andrew Downs, an associate professor and expert on Indiana politics at Purdue University-Fort Wayne. That said, he added, “people out on the extreme are upset with him, and they recognized the need to recapture some of the power the governor has been using.”

GREENVILLE, N.C.--(BUSINESS WIRE)--Employers aiming to win the war on talent have a new “A” team to tap into: college and professional athletes. … END_OF_DOCUMENT_TOKEN_TO_BE_REPLACED

Mortgage rates are likely to rise in July, extending a seven-month streak. High inflation, and the Federal Reserve's efforts to control it, have … END_OF_DOCUMENT_TOKEN_TO_BE_REPLACED